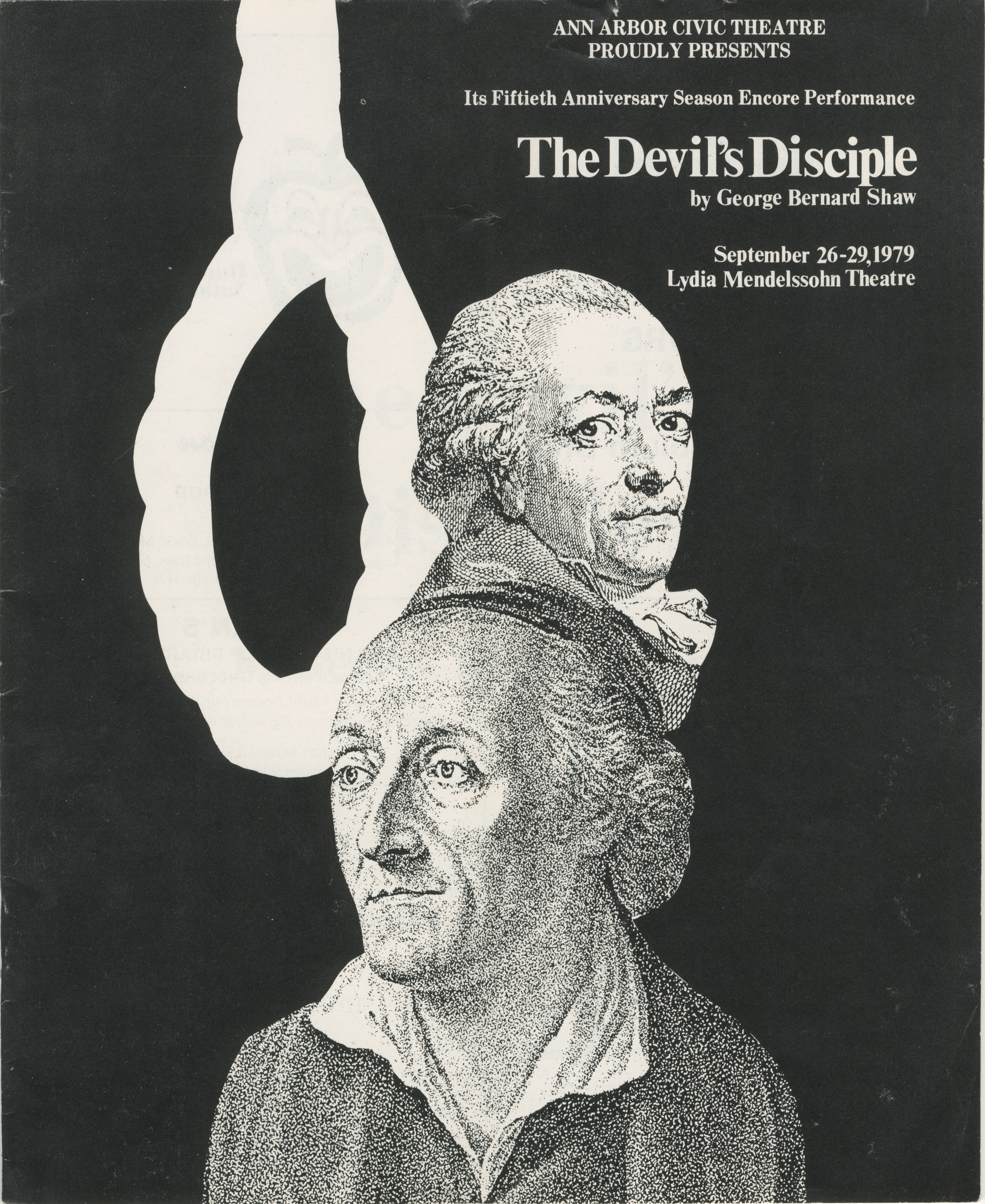 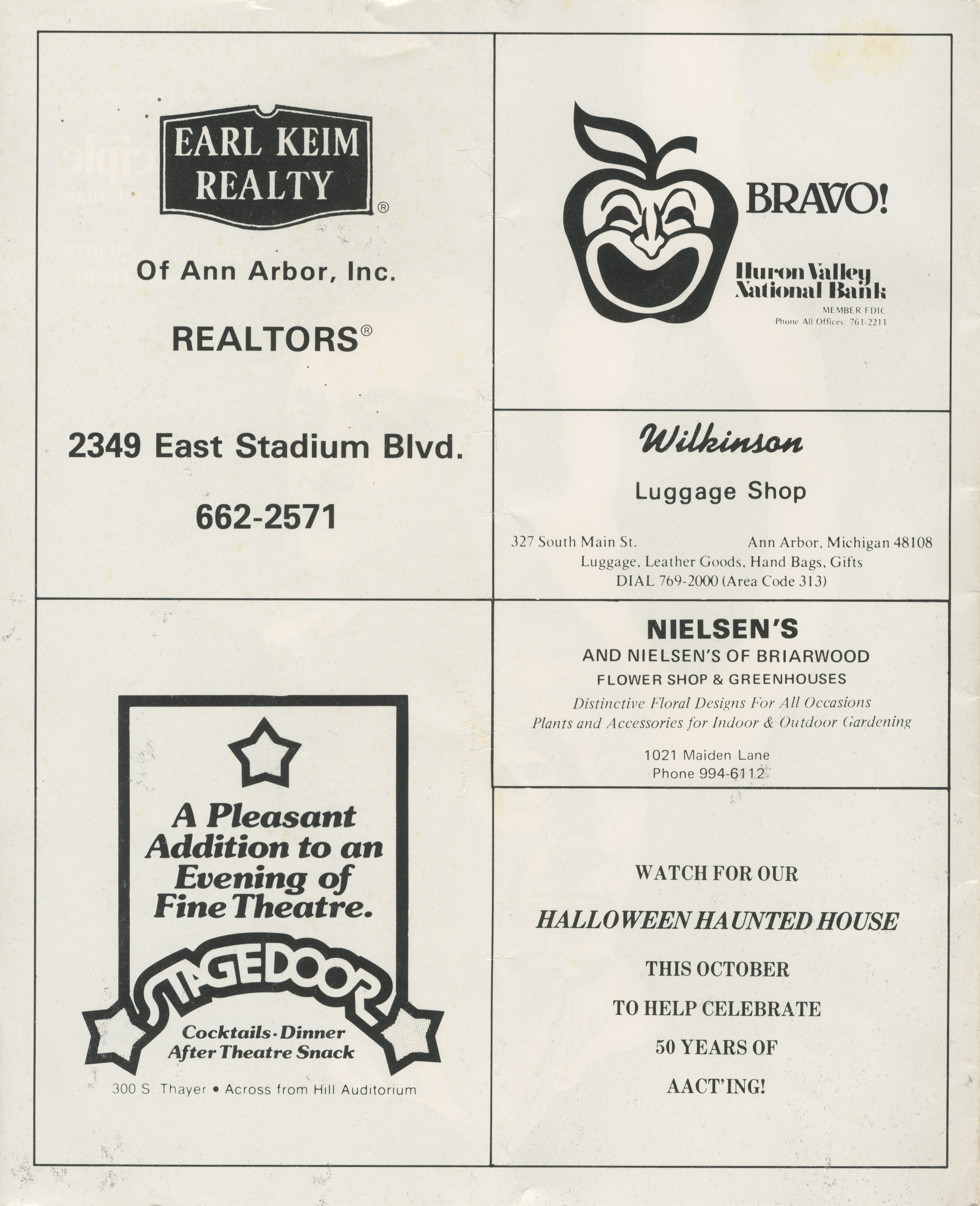 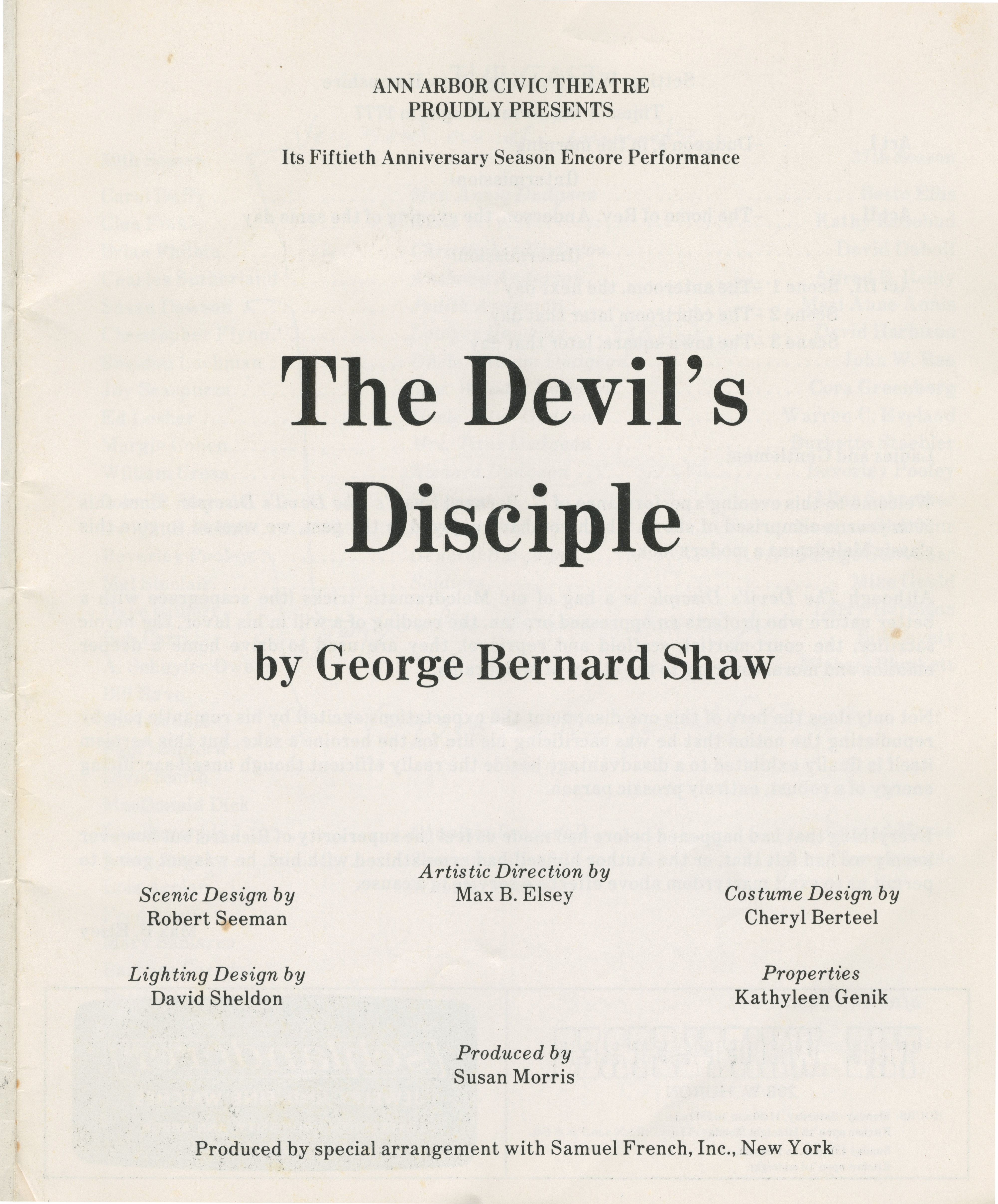 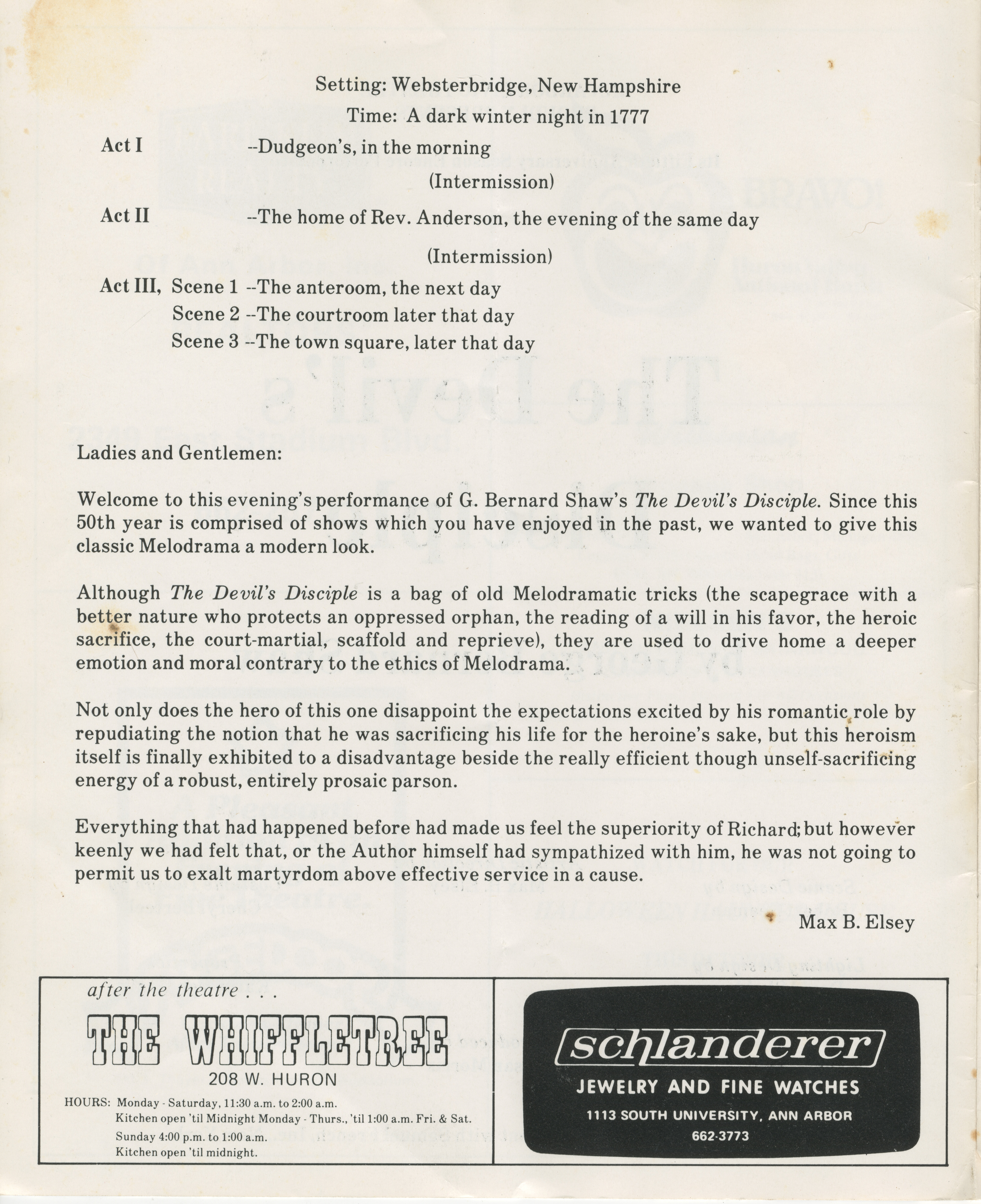 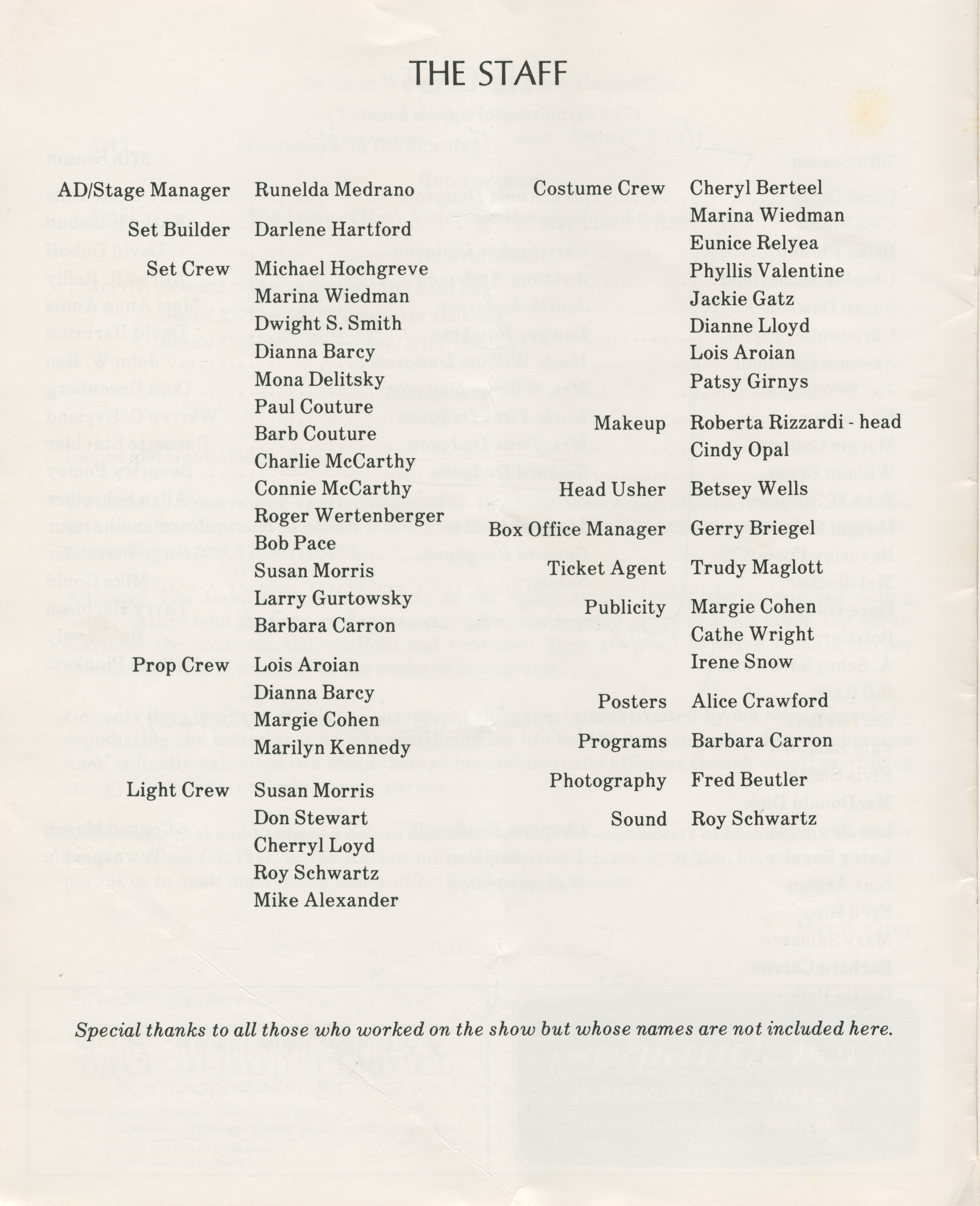 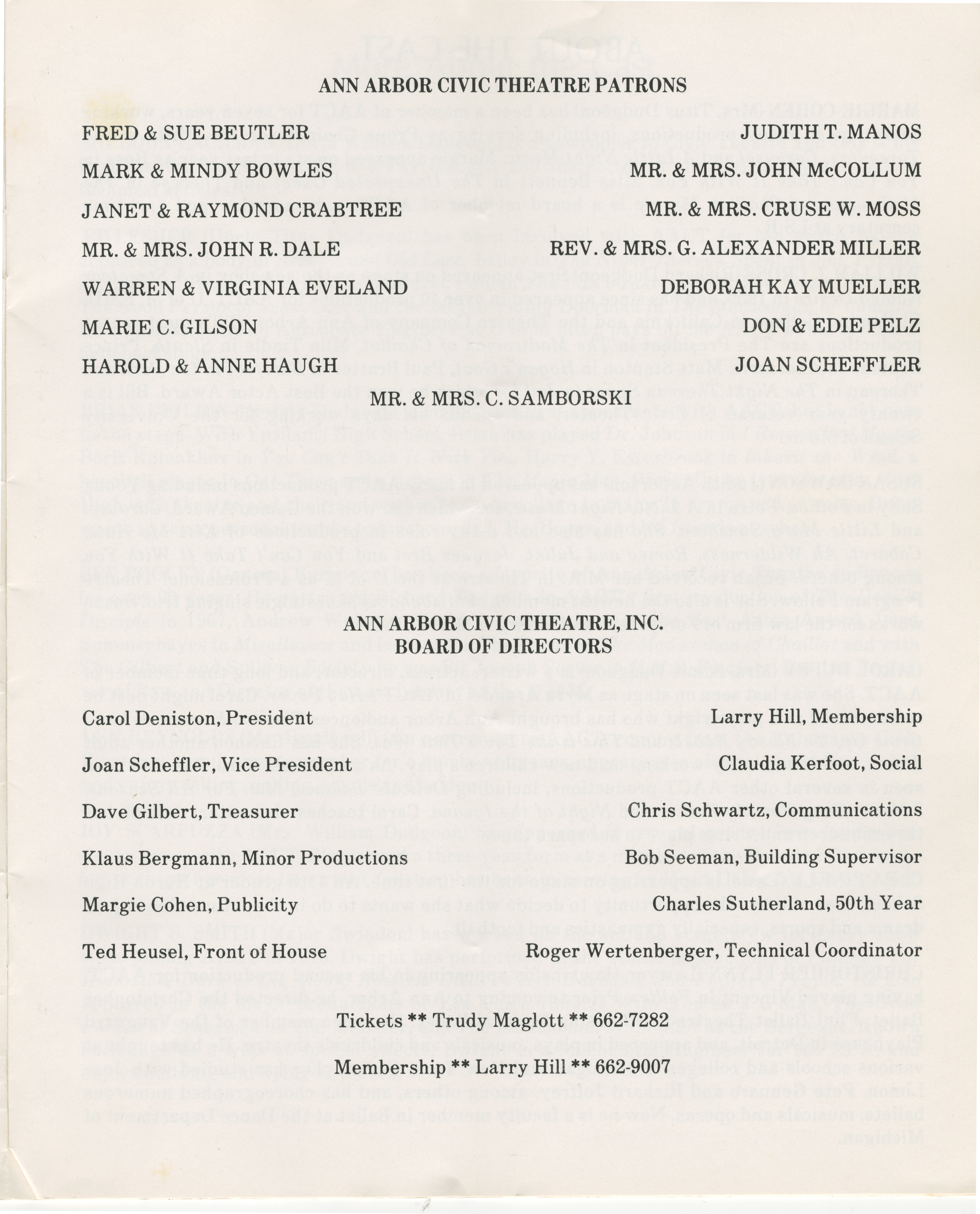 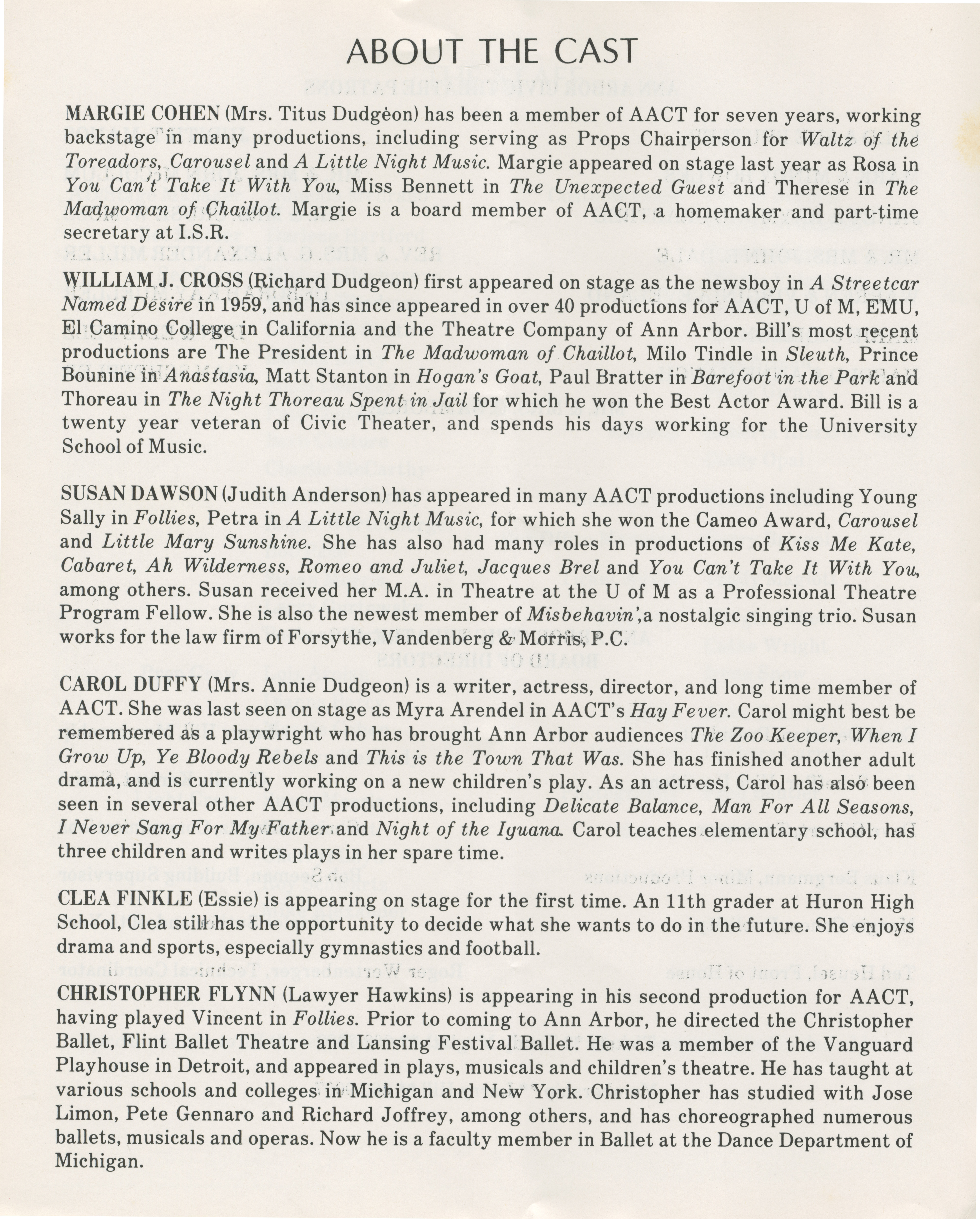 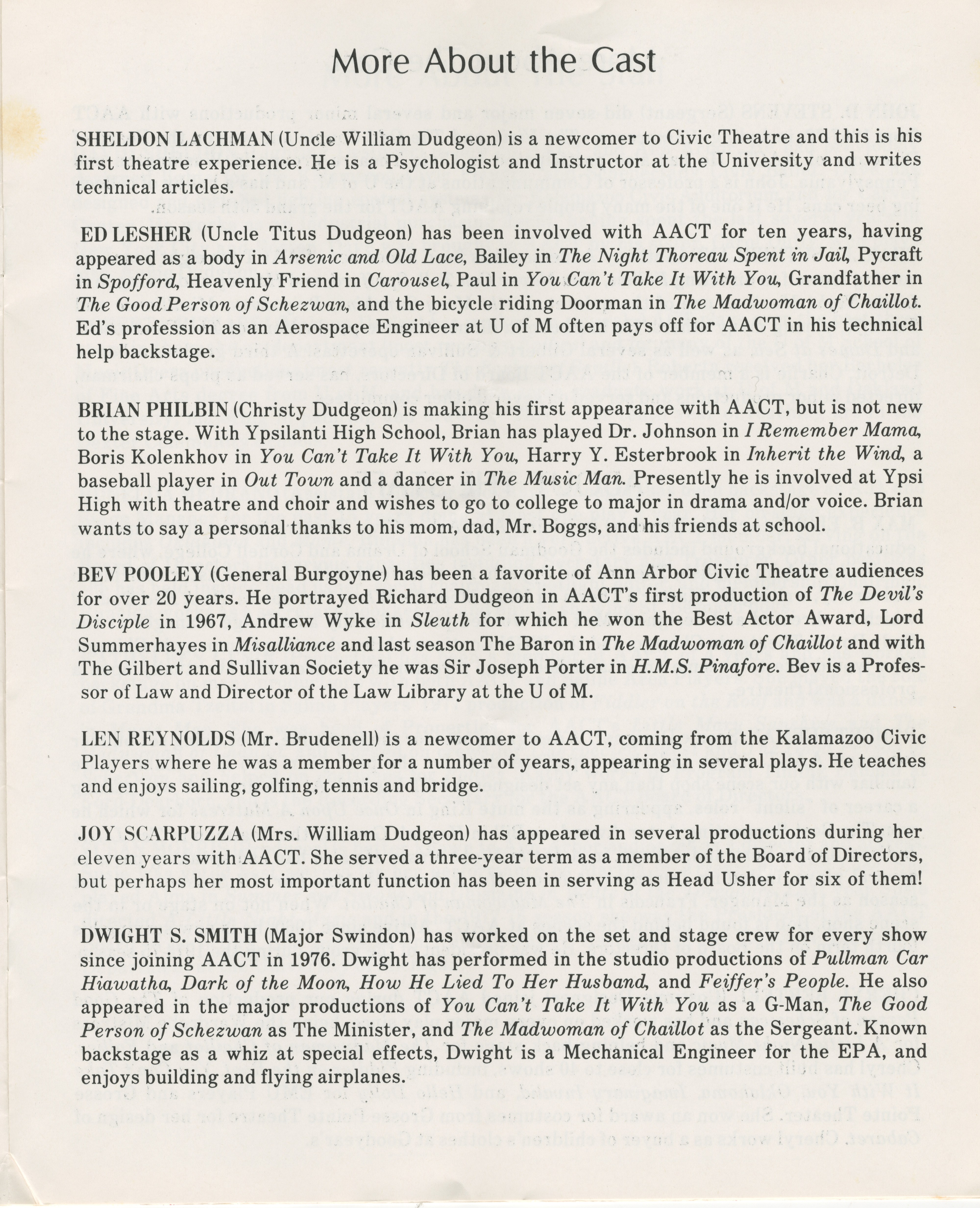 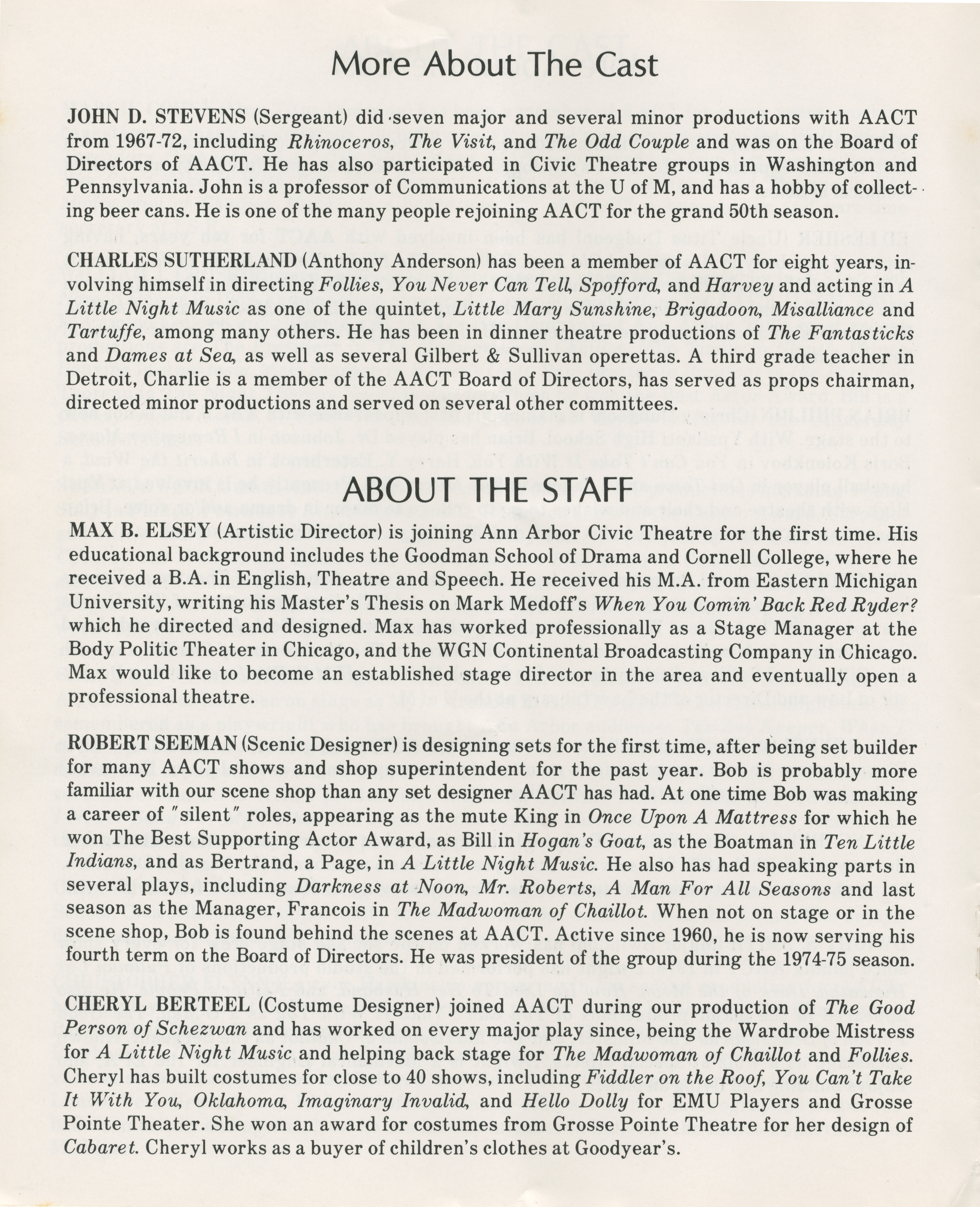 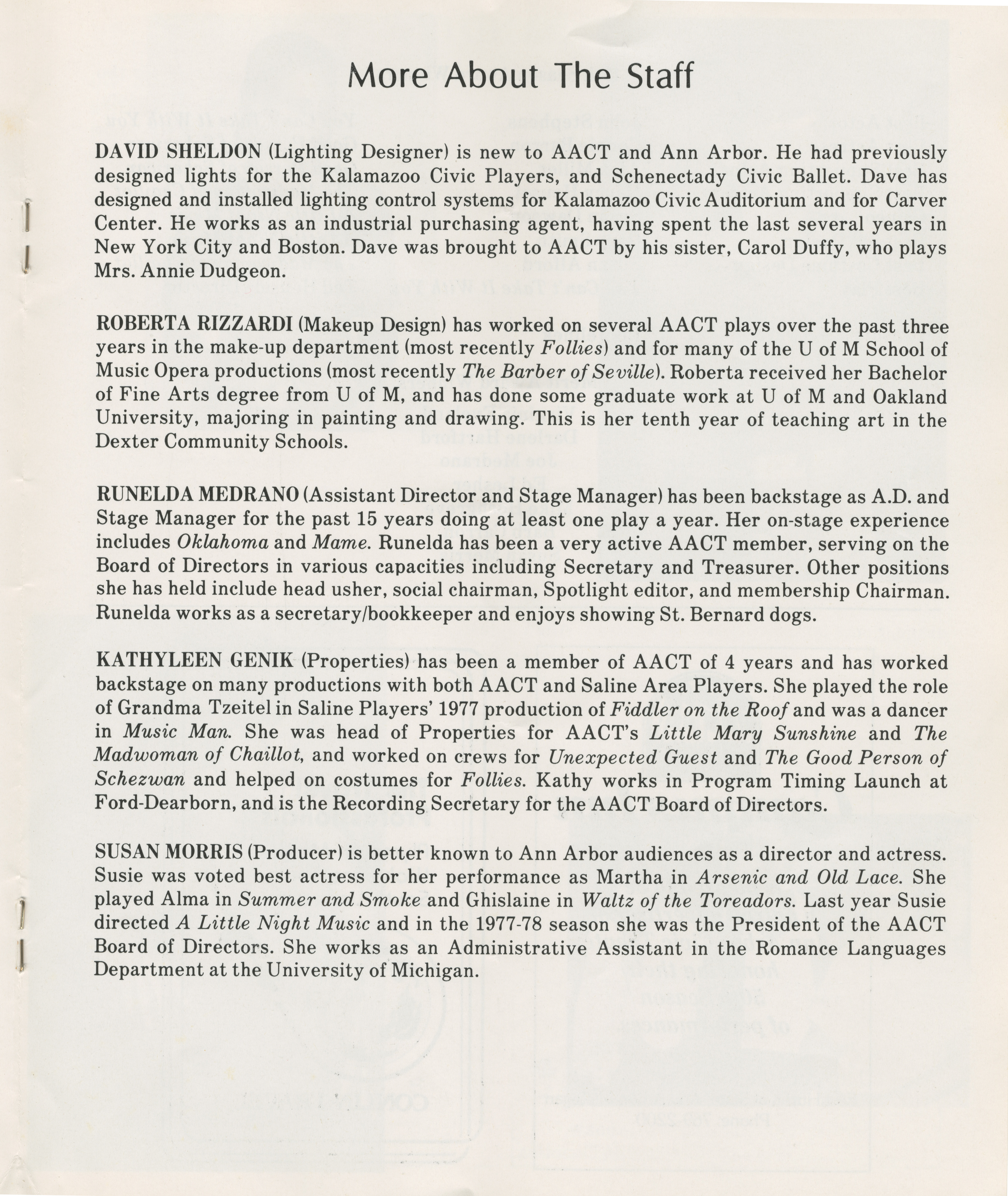 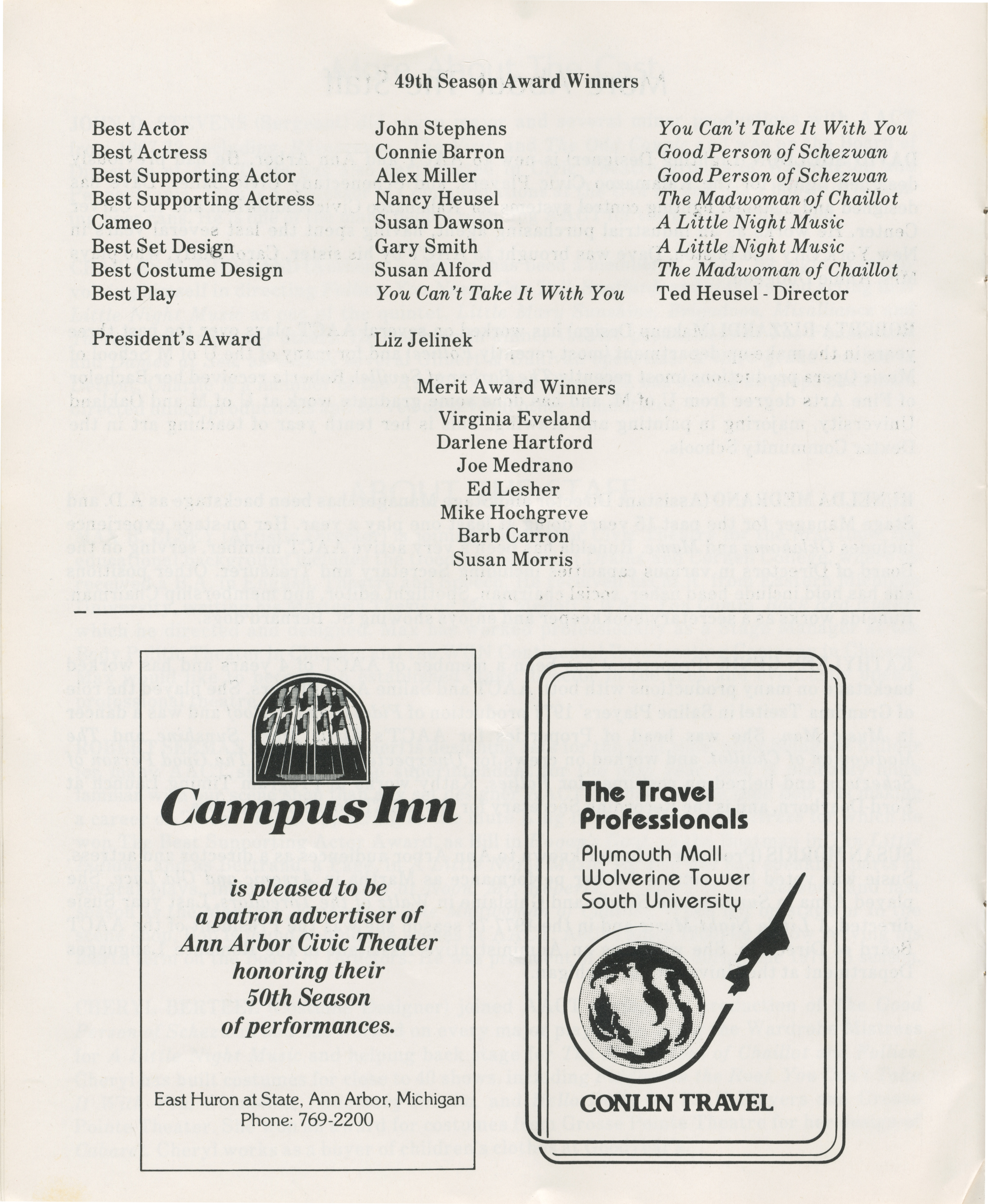 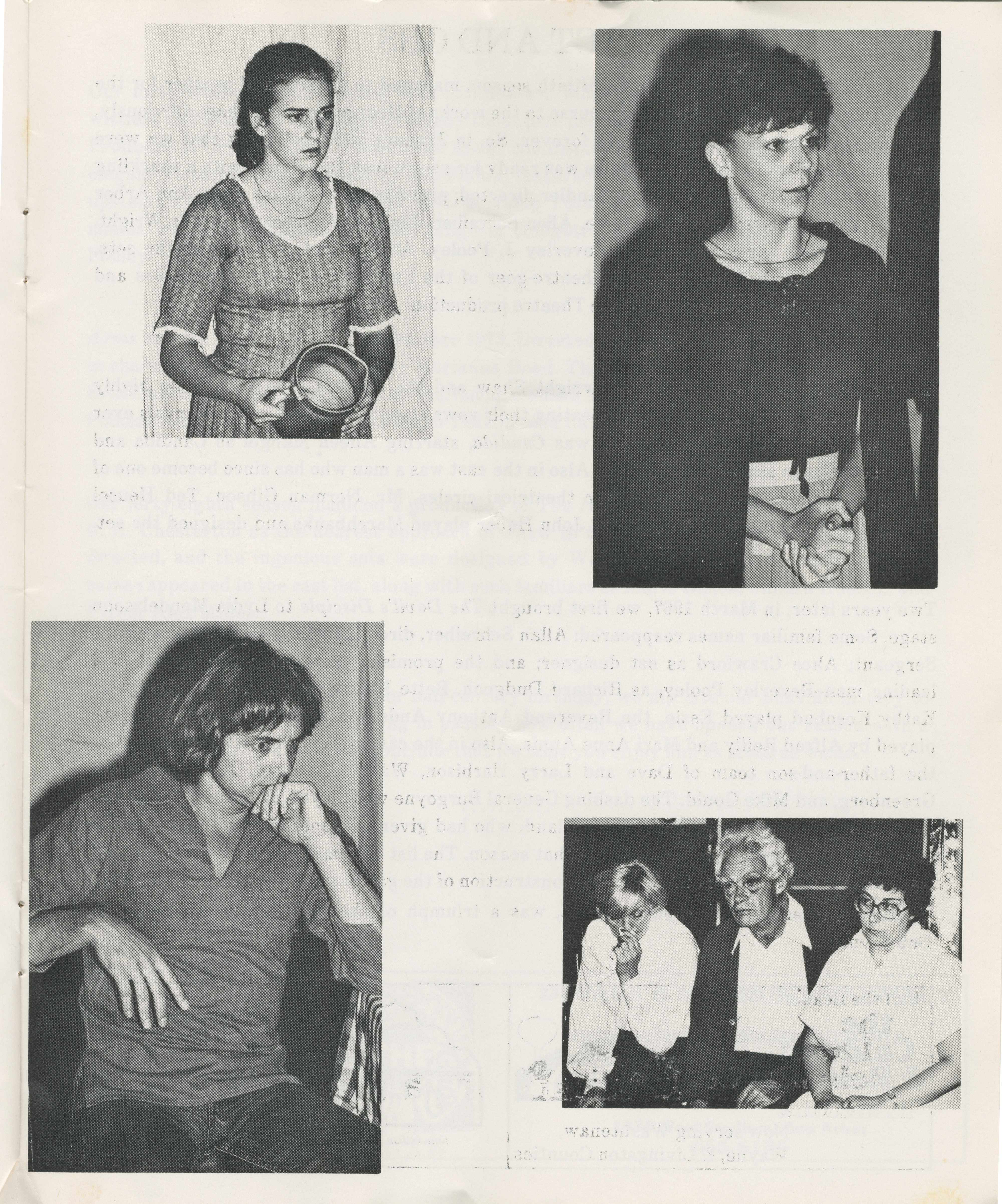 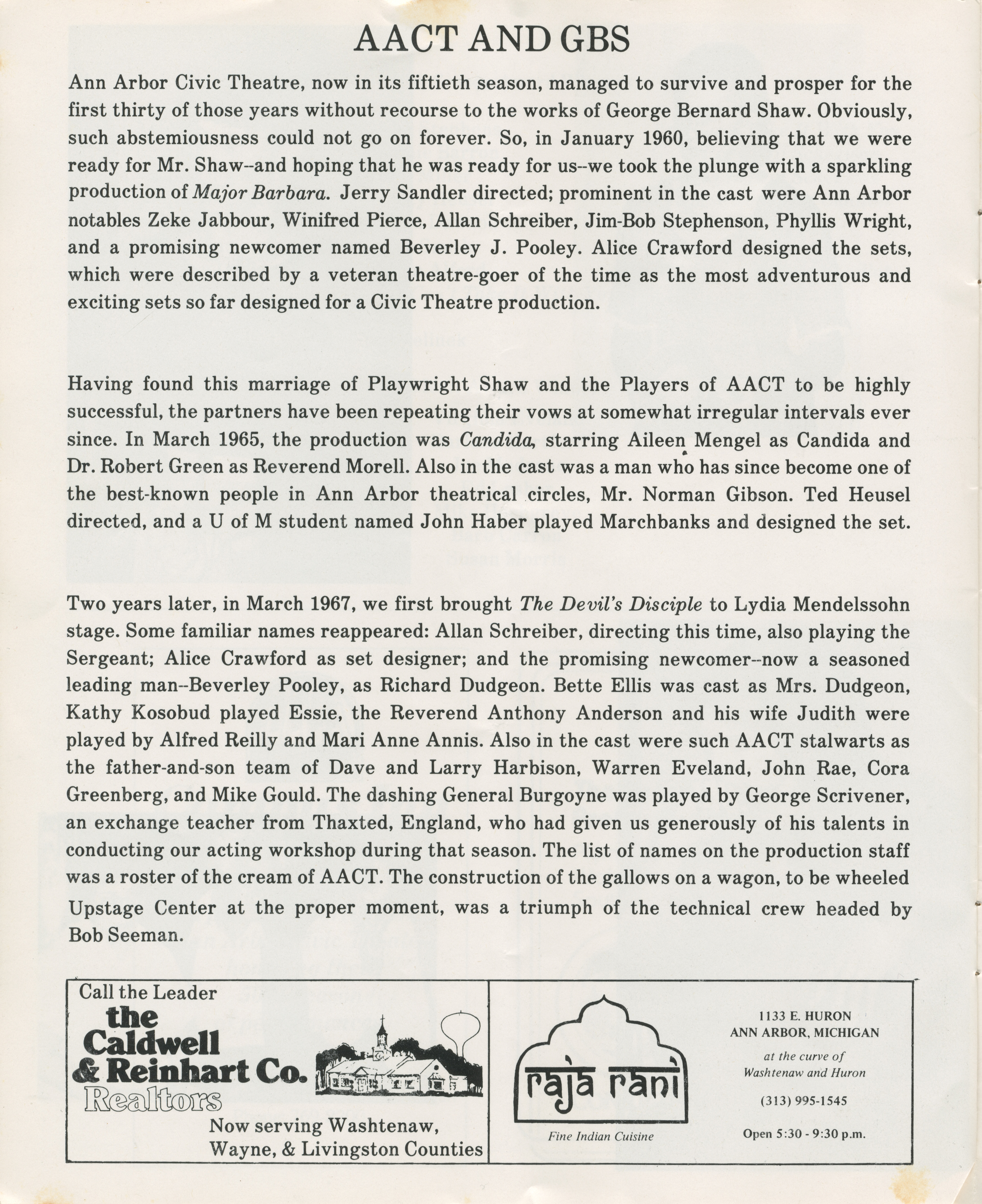 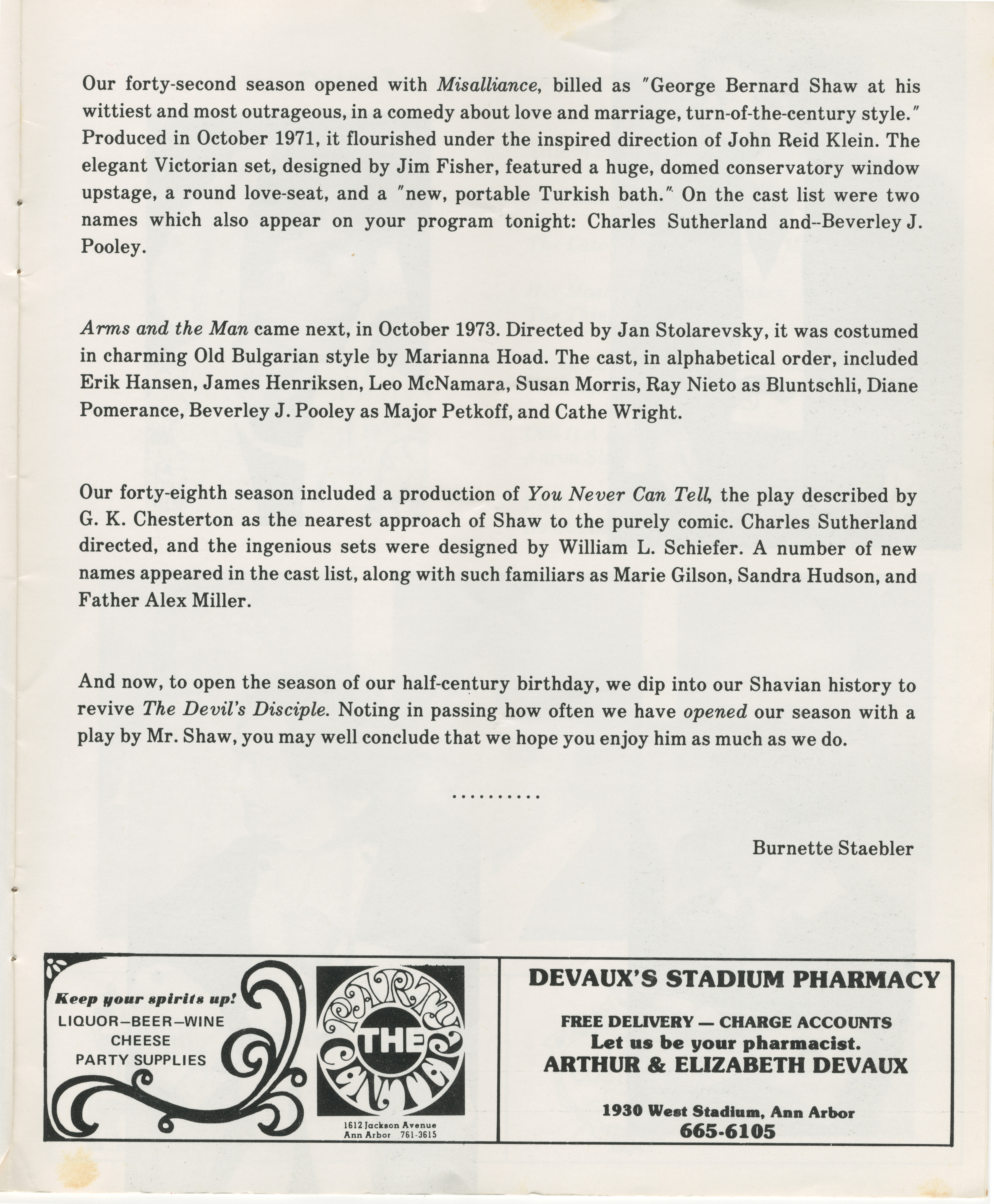 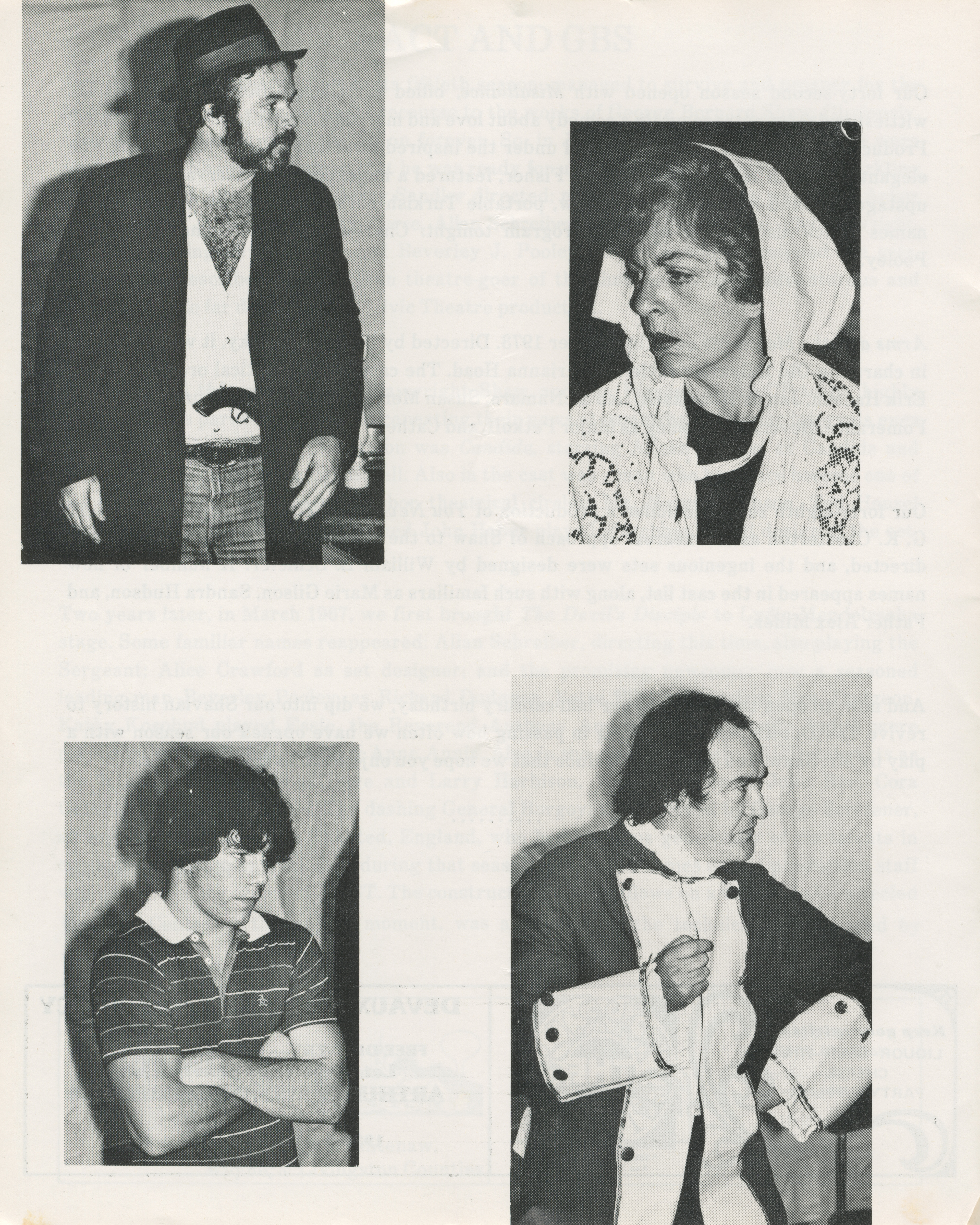 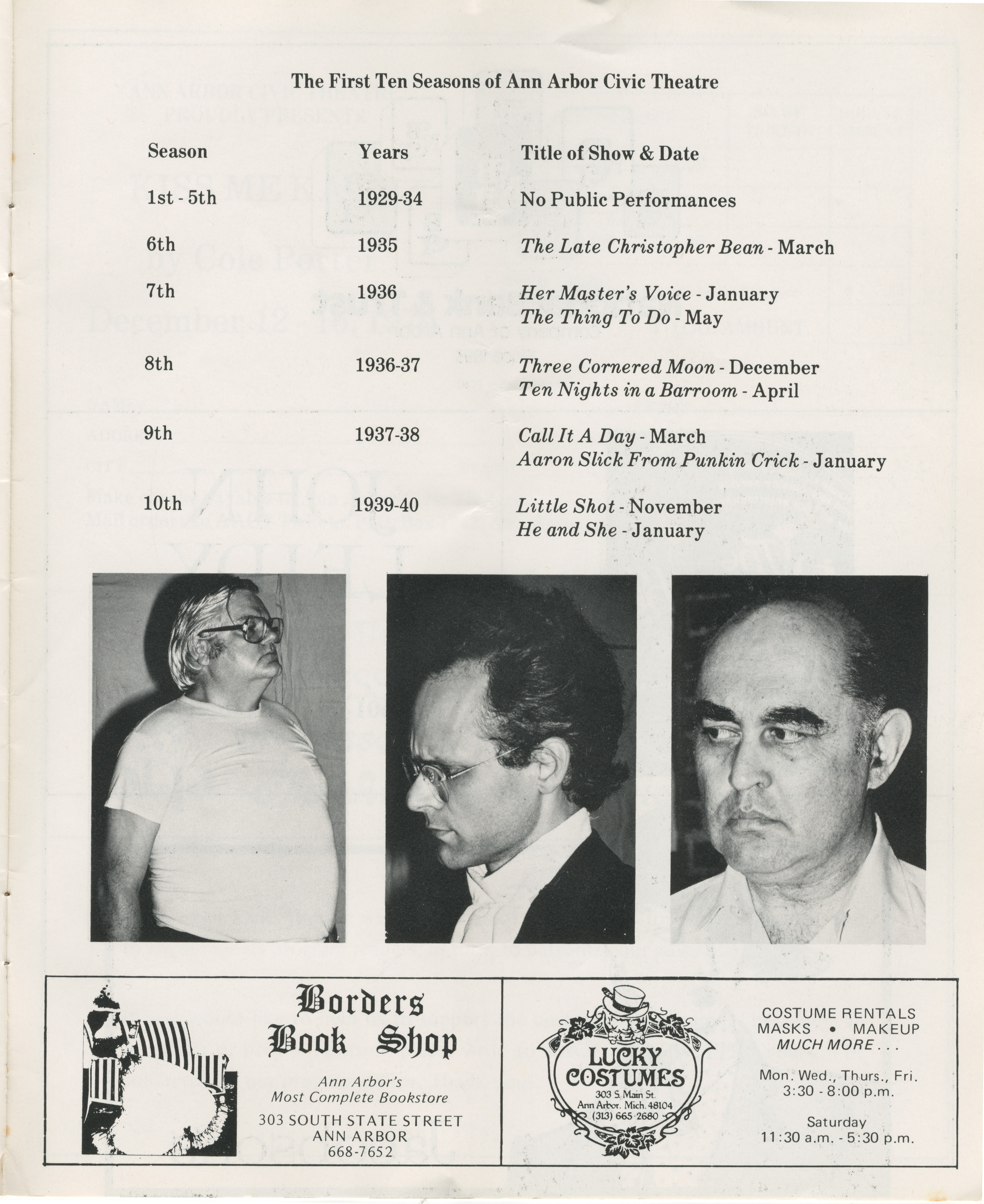 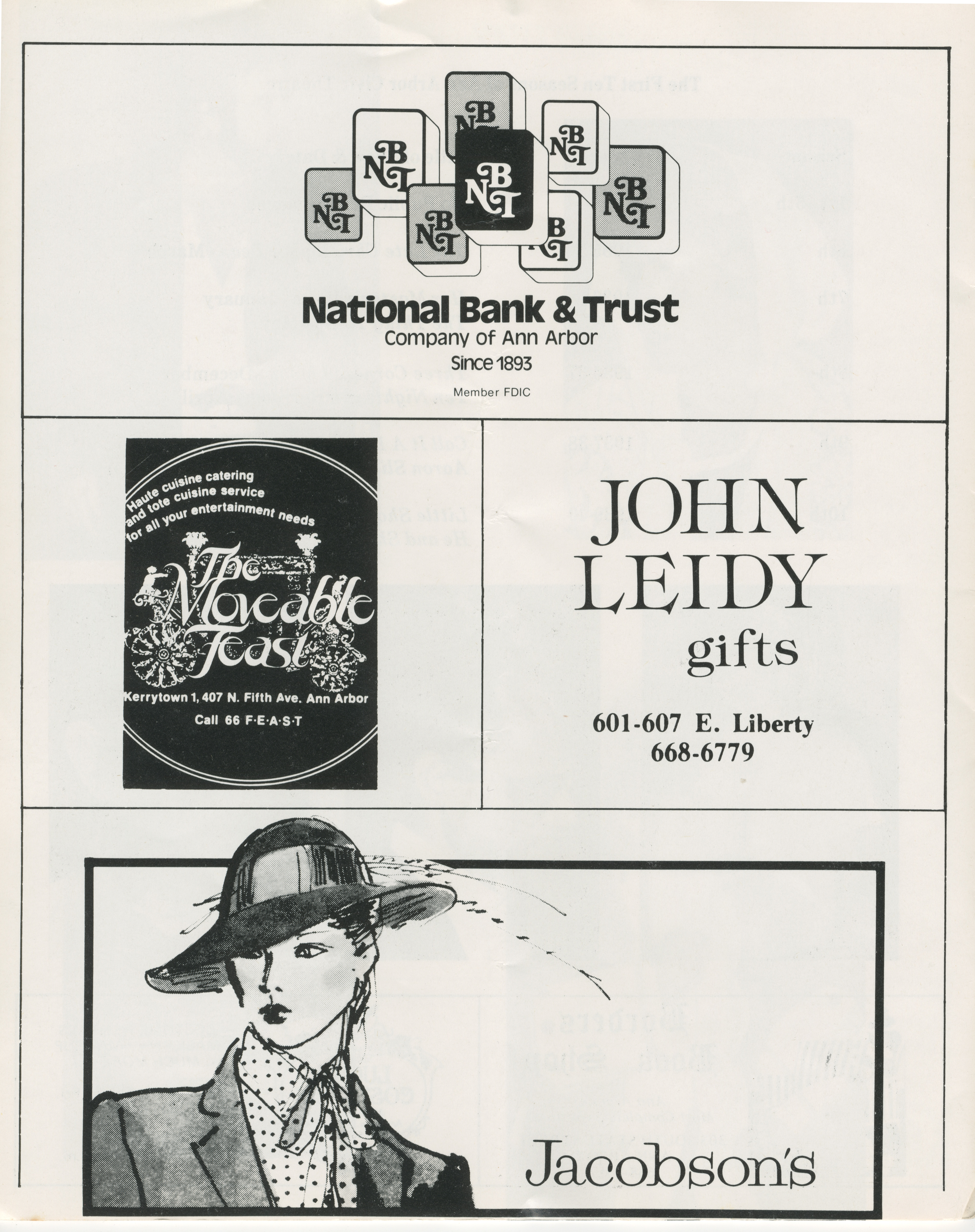 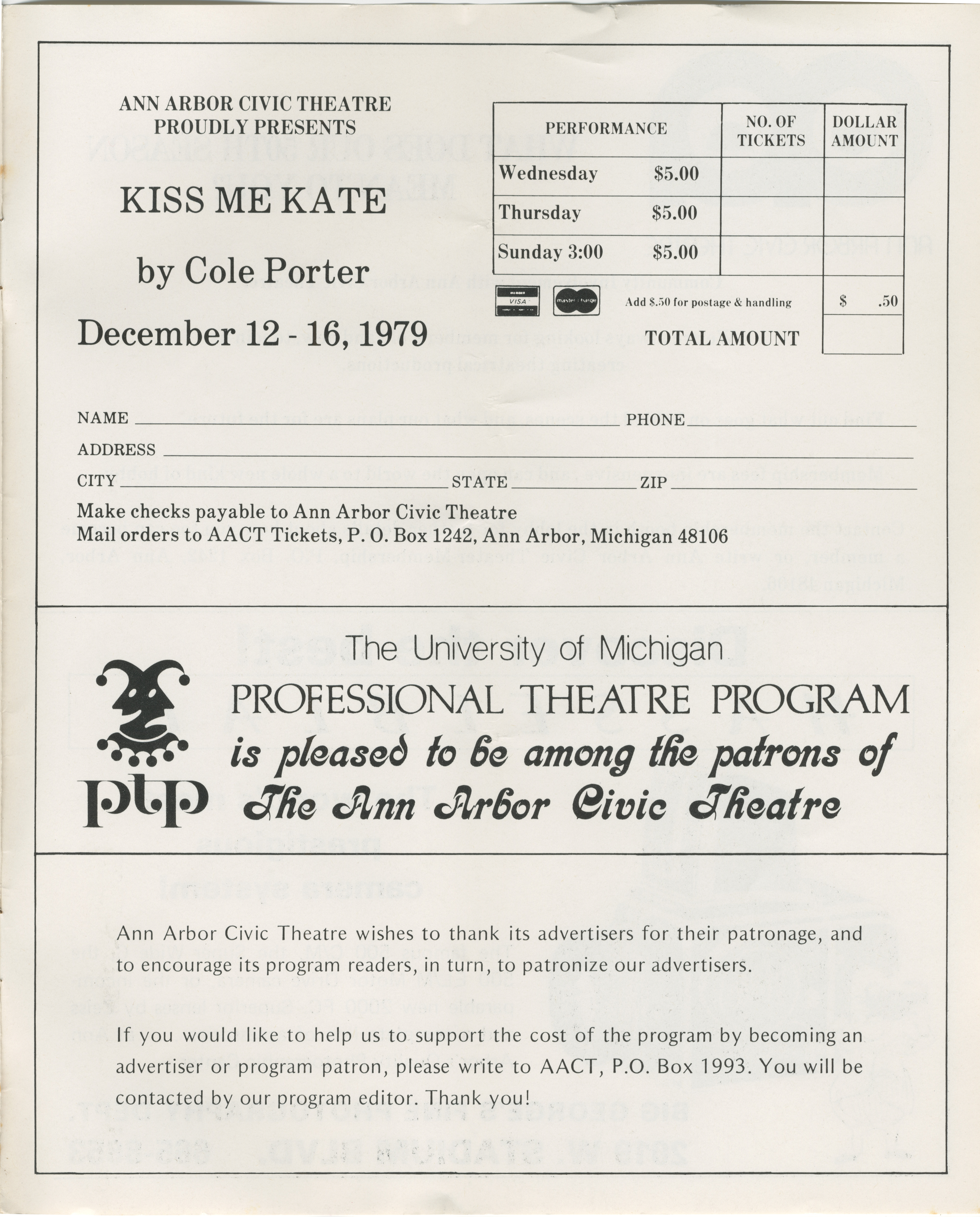 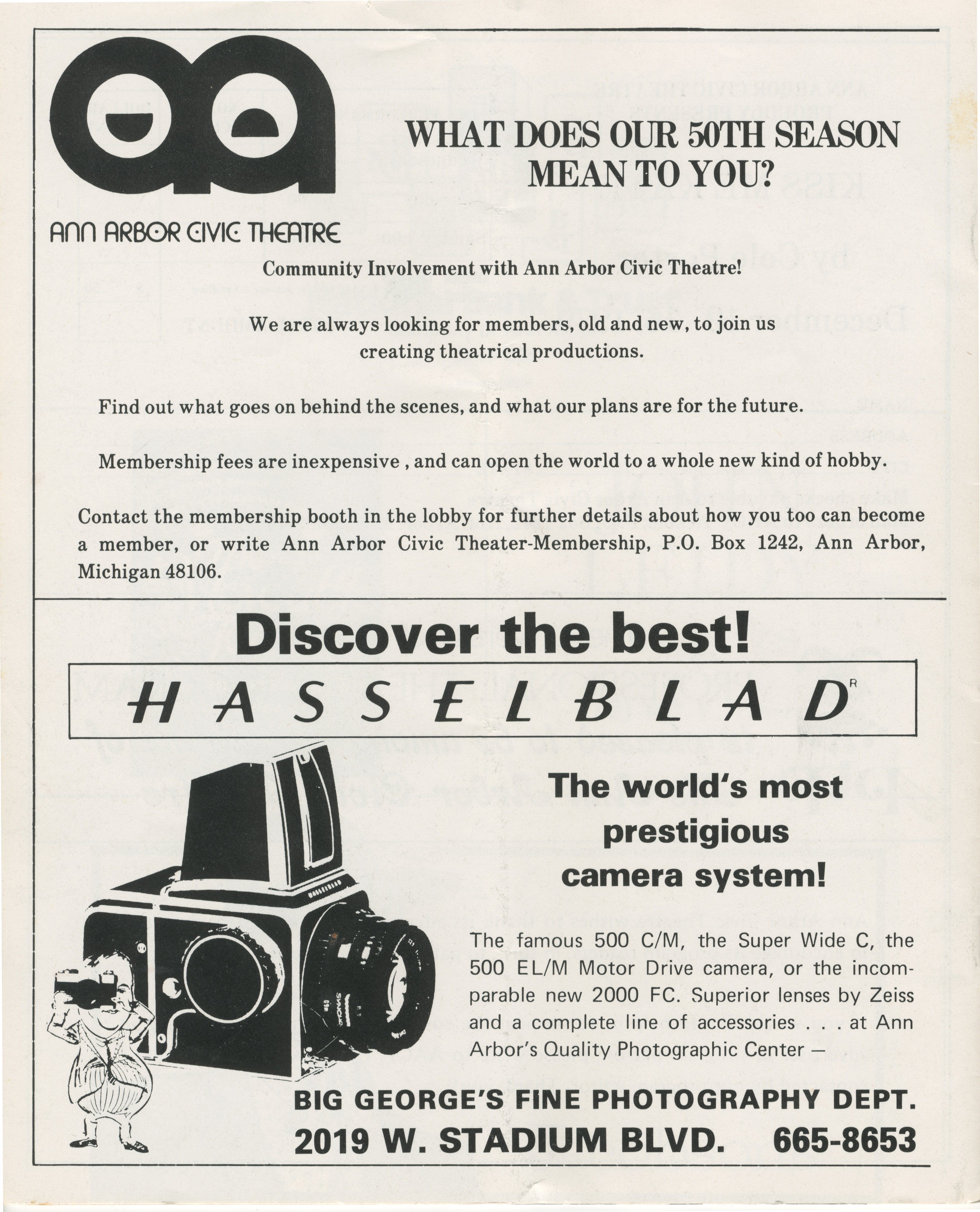 BRAVO! ® Of Ann Arbor, Inc. llm·on \itllt'IJ :\nlionnl n.uith REALTORS® 2349 East Stadium Blvd. Luggage Shop 662-2571 J27 SOL!Ih Ma in $1. Ann Arbor. Mit·higan 48108 Luggage. Lea ther Guocb. Hand Bags . Gi ft s DIAL 769~ 2000(1\ rca Code J IJ ) NIELSEN'S AND NIELSEN'S OF BRIARWOOD FLOWER SHOP & GREENHOUSES Oistillcth·c Floral Desi~tiS 1:or ,Ill Occasions Plants a11J Accessories for Indoor & Outdoor (,"ardeniiiK 1 021 Maiden Lane Phone 994 -6112 A Pleasant Addition to an Evening of Fine Theatre. WATCH FOR OUR HALLOWEEN HAUNTED HOUSE THIS OCTOBER TO HELP CELEBRATE 50 YEARS OF 300 S Thayer • Across from Hill Aud11onum AACT'ING! ANN ARBOR CIVIC THEATRE PROUDLY PRESENTS Its Fiftieth Anniversary Season Encore Performance The Devil's Disciple by George Bernard Shaw Scenic Design by Robert Seeman Artistic Direction by Max B. Elsey Lighting Design by David Sheldon Costume Design by Cheryl Berteel Properties Kathyleen Genik Produced by Susan Morris Produced by special arrangement with Samuel French, Inc., New York Setting: Websterbridge, New Hampshire Time: A dark winter night in 1777 Act I --Dudgeon's, in the morning Act II --The home of Rev. Anderson, the evening of the same day (Intermission) (Intermission) Act Ill, Scene 1 --The anteroom, the next day Scene 2 --The courtroom later that day Scene 3 --The town square, later that day Ladies and Gentlemen: Welcome to this evening's performance of G. Bernard Shaw's The D e viZ's Disciple. Since this 50th year is comprised of shows which you have enjoyed in the past, we wanted to give this classic Melodrama a modern look. Although The Devil's Disciple is a bag of old Melodramatic tricks (the scapegrace with a better nature who protects an oppressed orphan, the reading of a will in his favor, the heroic sacrifice, the court-martial, scaffold and reprieve), they are used to drive home a deeper emotion and moral contrary to the ethics of Melodrama. Not only does the hero of this one disappoint the expectations excited by his romantic,role by repudiating the notion that he was sacrificing his life for the heroine's sake, but this heroism itself is finally exhibited to a disadvantage beside the really efficient though unself-sacrificing energy of a robust, entirely prosaic parson. Everything that had happened before had made us feel the superiority of Richard; but however keenly we had felt that, or the Author himself had sympathized with him, he was not going to permit us to exalt martyrdom above effective service in a cause. .. after the thea tre . HOURS: Monday -Saturday. 11 :30a.m. to 2:00a.m. Kitchen open 'lil Midnight Monday· Thurs.. till :OOa.m. Fri. & Sat Sunday 4:00p.m. to I :00 a .m. Kitchenopen'tilmidnight. Max B. Elsey THE CAST Jru5 (in order of appearance) / J