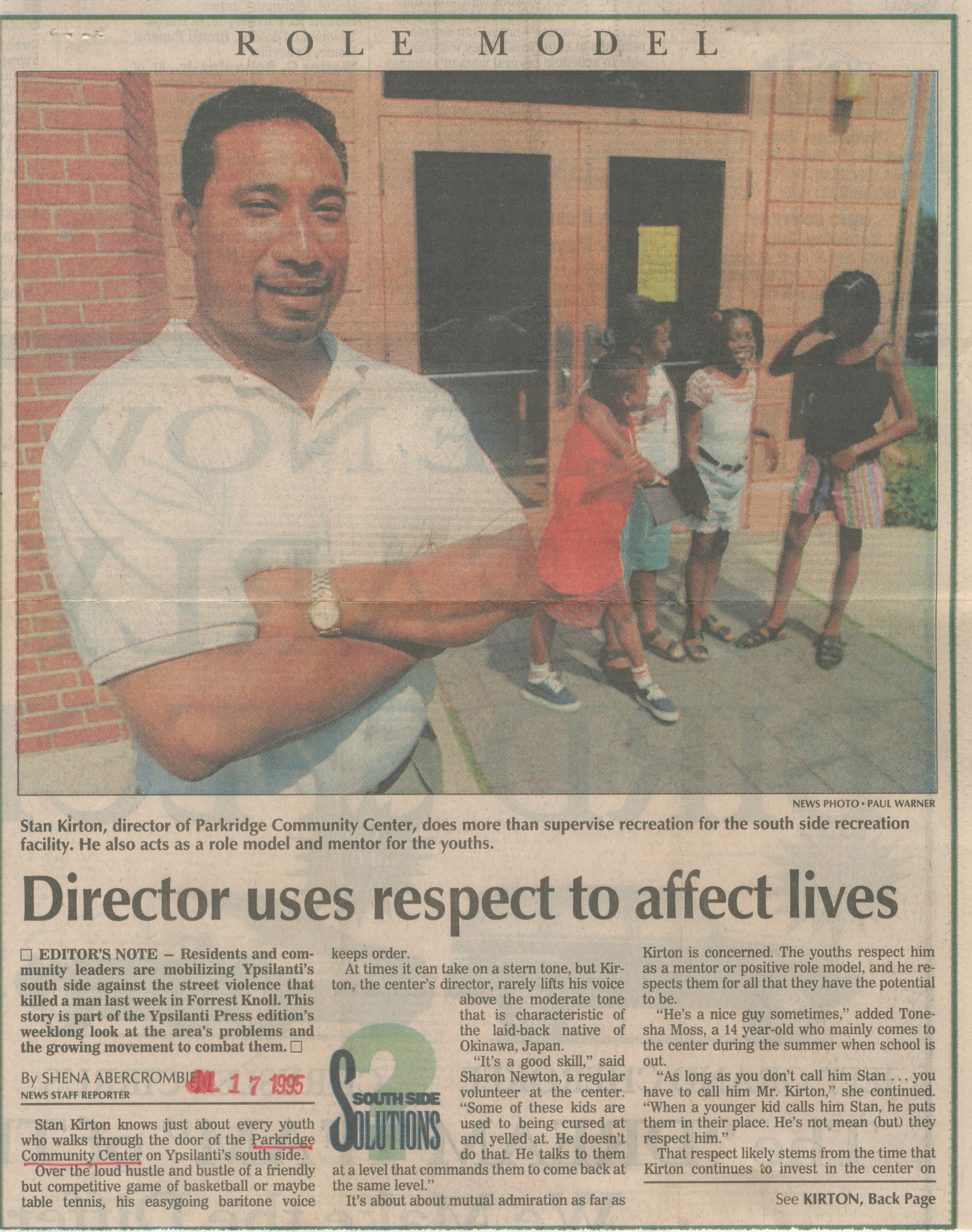 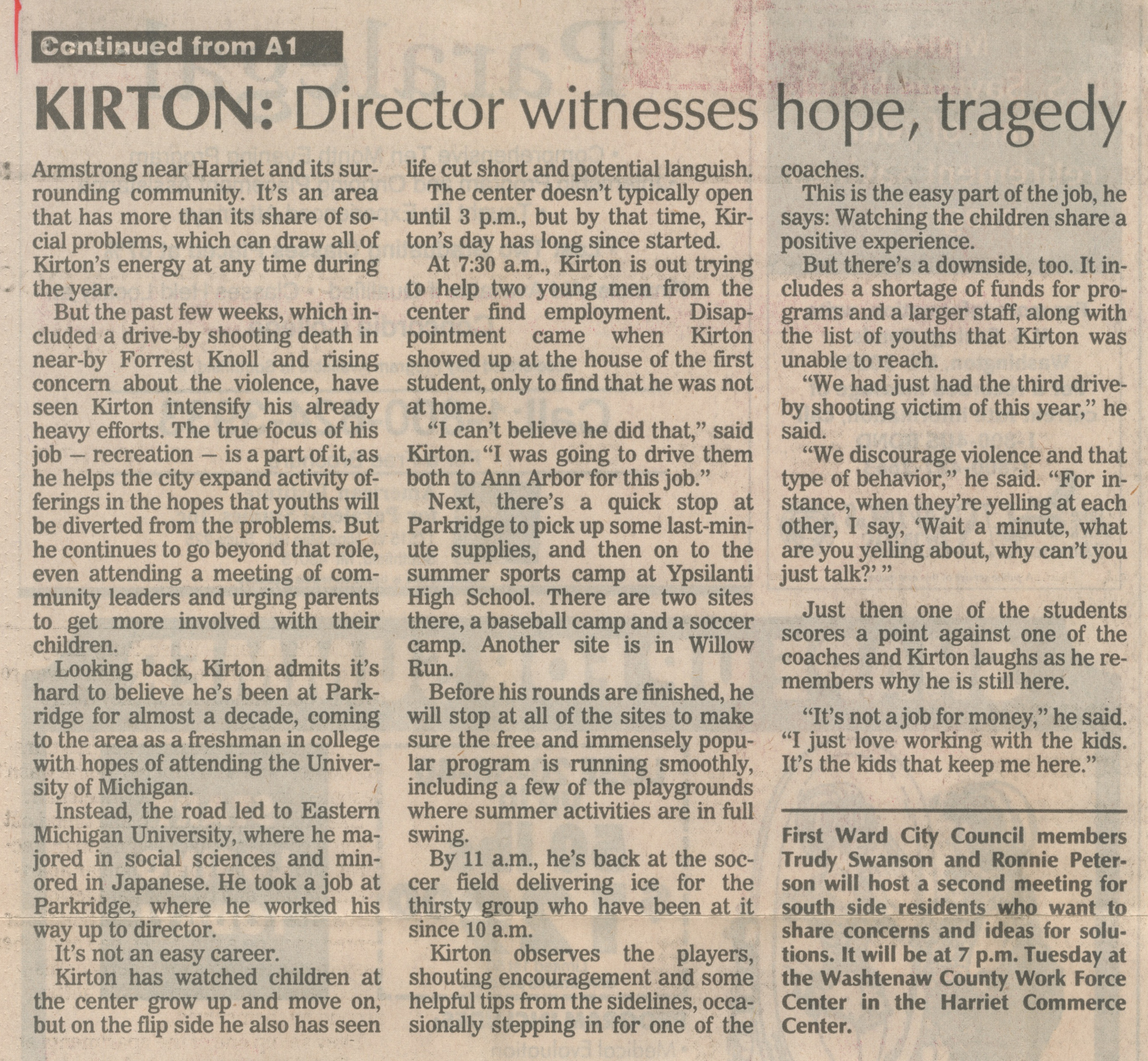 EDITOR'S NOTE -- Residents and community leaders are mobilizing Ypsilanti's south side against the street violence that killed a man last week in Forrest Knoll. This story is part of the Ypsilanti Press edition's weeklong look at the area's problems and the growing movement to combat them.

Stan Kirton knows just about every youth who walks through the door of the Parkridge Community Center on Ypsilanti's south side.

Over the loud hustle and bustle over a friendly but competitive game of basketball or maybe table tennis, his easygoing baritone voice keeps order.

At times it can take on a stern tone, but Kirton, the center's director, rarely lifts his voice above the moderate tone that is characteristic of the laid-back native of Okinawa, Japan.

"It's a good skill," said Sharon Newton, a regular volunteer at the center. "Some of these kids are used to being cursed at and yelled at. He doesn't do that. He talks to them at a level that commands them to come back at the same level."

It's about mutual admiration as far as Kirton is concerned. The youths respect him as a mentor or positive role model, and he respects them for all that they have the potential to be.

"He's a nice guy sometimes," added Tonesha Moss, a 14 year-old who mainly comes to the center during the summer when school is out.

"As long as you don't call him Stan ... you have to call him Mr. Kirton," she continued. "When a younger kid calls him Stan, he puts them in their place. He's not mean (but) they respect him."

That respect likely stems from the time that Kirton continues to invest in the center on Armstrong near Harriet and its surrounding community. It's an area that has more than its share of social problems, which can draw all of Kirton's energy at any time during the year.

But the past few weeks, which included a drive-by shooting death in near-by Forrest Knoll and rising concern about the violence, have seen Kirton intensify his already heavy efforts. The true focus of his job -- recreation -- is part of it, as he helps the city expand activity offerings in the hopes that youths will be diverted from the problems. But he continues to go beyond that role, even attending a meeting of community leaders and urging parents to get more involved with their children.

Looking back, Kirton admits it's hard to believe he's been at Parkridge for almost a decade, coming tot he area as a freshman in college with hopes of attending the University of Michigan.

Instead, the road led to Eastern Michigan University, where he majored in social sciences and minored in Japanese. He took a job at Parkridge, where he worked his way up to director.

It's not an easy career.

Kirton has watched children at the center grow up and move on, but on the flip side he has also seen life cut short and potential languish.

The center doesn't typically open until 3 p.m., but by that time, Kirton's day has long since started.

At 7:30 a.m., Kirton is out trying to help two young men from the center find employment. Disappointment came when Kirton showed up at the house of the first student, only to find that he was not at home.

"I can't believe he did that," said Kirton. "I was going to drive them both to Ann Arbor for this job."

Next, there's a quick stop at Parkridge to pick up some last-minute supplies, and then on to the summer sports camp at Ypsilanti High School. There are two sites there, a baseball camp and a soccer camp. Another site is in Willow Run.

Before his rounds are finished, he will stop at all of the sties to make sure the free and immensely popular program is running smoothly, including a few of the playgrounds where summer activities are in full swing.

By 11 a.m., he's back at the soccer field delivering ice for the thirsty group who have been at it since 10 a.m.

Kirton observes the players, shouting encouragement and some helpful tips from the sidelines, occasionally stepping in for one of the coaches.

This is the easy part of the job, he says: Watching the children share a positive experience.

But there's a downside, too. It includes a shortage of funds for programs and a larger staff, along with the list of youths that Kirton was unable to reach.

"We had just had the third drive-by shooting victim of this year," he said.

"We discourage violence and that type of behavior," he said. "For instance, when they're yelling at each other, I say, 'Wait a minute, what are you yelling about, why can't you just talk?' "

Just then one of the students scores a point against one of the coaches and Kirton laughs as he remembers why he is still here.

"It's not a job for money," he said. "I just love working with the kids. It's the kids that keep me here."

First Ward City Council Members Trudy Swanson and Ronnie Peterson will host a second meeting for the south side residents who want to share concerns and ideas for solutions. It will be at 7 p.m. Tuesday at the Washtenaw County Work Force Center in the Harriet Commerce Center.

Stan Kirton, director of Parkridge Community Center, does more than supervise recreation for the south side recreation facility. He also acts as a role model and mentor for the youths.