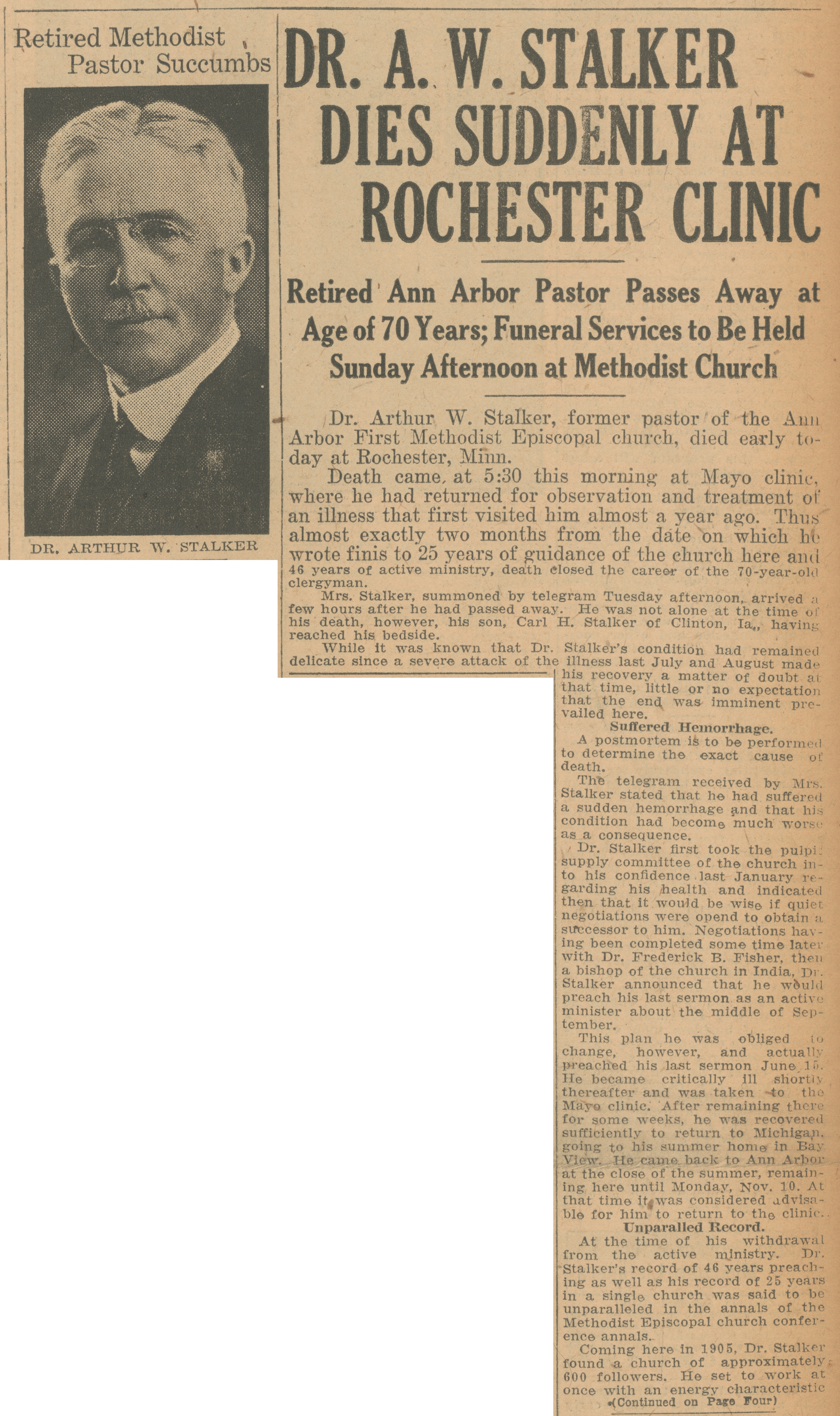 Retired Ann Arbor Pastor Passes Away at Age of 70 Years; Funeral Services to Be Held Sunday Afternoon at Methodist Church
Dr. Arthur W. Stalker, former pastor of the Ann Arbor First Methodist Episcopal church, died early today at Rochester, Minn.
Death came at 5:30 this morning at Mayo clinic, where he had returned for observation and treatment of an illness that first visited him almost a year ago. Thus almost exactly two months from the date on which he wrote finis to 25 years of guidance of the church here and 46 years of active ministry, death closed the career of the 70-year-old clergyman.
Mrs. Stalker, summoned by telegram Tuesday afternoon, arrived a few hours after he had passed away. He was not alone at the time of his death, however, his son, Carl H. Stalker of Clinton, Ia., having reached his bedside.
While it was known that Dr. Stalker's condition had remained delicate since a severe attack of the illness last July and August made his recovery a matter of doubt at that time, little or no expectation that the end was imminent prevailed here.
Suffered Hemorrhage.
A postmortem is to be performed to determine the exact cause of death.
The telegram received by Mrs. Stalker stated that he had suffered a sudden hemorrhage and that his condition had become much worse as a consequence.
Dr. Stalker first took the pulpit supply committee of the church into his confidence last January regarding his health and indicated then that it would be wise if quiet negotiations were opened to obtain a successor to him. Negotiations having been completed some time later with Dr. Frederick B. Fisher, then a bishop of the church in India, Dr. Stalker announced that he would preach his last sermon as an active minister about the middle of September.
This plan he was obliged to change, however, and actually preached his last sermon June 15. He became critically ill shortly thereafter and was taken to the Mayo clinic. After remaining there for some weeks, he was recovered sufficiently to return to Michigan, going to his summer home in Bay View. He came back to Ann Arbor at the close of the summer, remaining here until Monday, Nov. 10. At that time it was considered advisable for him to return to the clinic.
Unparalled Record.
At the time of his withdrawal from the active ministry, Dr. Stalker's record of 46 years preaching as well as his record of 25 years in a single church was said to be unparalleled in the annals of the Methodist Episcopal church conference annals.
Coming here in 1905, Dr. Stalker found a church of approximately 600 followers. He set to work at once with an energy characteristic of him to make the church indispensable to many more townspeople and students. At the close of his pastorate the membership had expanded to between 1,700 and 1,800 and the church had become a great factor in student religious life. Real property of the church increased several fold in the period of his pastorate.
On the occasion of the twenty-second anniversary of his coming to the Ann Arbor church, more than 350 members of his congregation tendered him a surprise banquet. A similar event, although of a much quieter nature was given him by a few intimate friends on the evening of Nov. 6 in the church. A birthday cake was served and a program given in honor of his seventieth birthday. That evening marks the last time Dr. Stalker spoke in the church. He made a few remarks of appreciation and gratitude at that time.
As a token of esteem, officials of the church reserved the parsonage at 123 North State St. for the use of Dr. and Mrs. Stalker for the remainder of their lives.
Served Many Churches.
Dr. Stalker was born Nov. 6, 1860 at Commerce, Mich. He came to Ann Arbor for his college education, obtaining his first degree here in 1884, and a master's degree in 1909. In the meantime, however, he had earned doctor of divinity degree at Lawrence, Wis., college.
He married Miss Mary M. Hendrickson of Ann Arbor in 1885 and the following year was ordained in the ministry.
Previous to his coming to the Ann Arbor church as pastor, he had served pulpits in Dixboro in 1884, then Clinton for five years, Detroit for five more, Sault St. Marie for three more and then to Madison, Wis., where he had his first experience as a pastor in a student community. He served there for five years, coming next to Ann Arbor. In 1921 he was exchange preacher to London, England.
Surviving are his widow, two daughters, Miss Esther and Mrs. Catherine Miller of Ann Arbor; two sons, Carl of Clinton, Ia., and George A. of Detroit; a brother, G. H. Stalker of Detroit and a grandson Arthur W. Miller of Ann Arbor.
He was member of Phi Beta Kappa, national honorary scholastic society, and Delta Upsilon. In political beliefs he was Republican. He was a member of the Barton Hills Country club, Ann Arbor Golf and Outing club and was a Kiwanian.
Services Sunday.
Mrs. Stalker will leave Rochester tonight with the body and is expected to arrive here Thursday afternoon. The body will lie in state from 1:30 to 3:15 Sunday afternoon at the First Methodist church.
Funeral services will be held at 3:30 Sunday afternoon at the church, and will be conducted by Dr. F. B. Fisher, pastor, and Dr. J. E. Martin, superintendent of the Ann Arbor district of the Methodist church. Interment will be in Forest Hill cemetery.