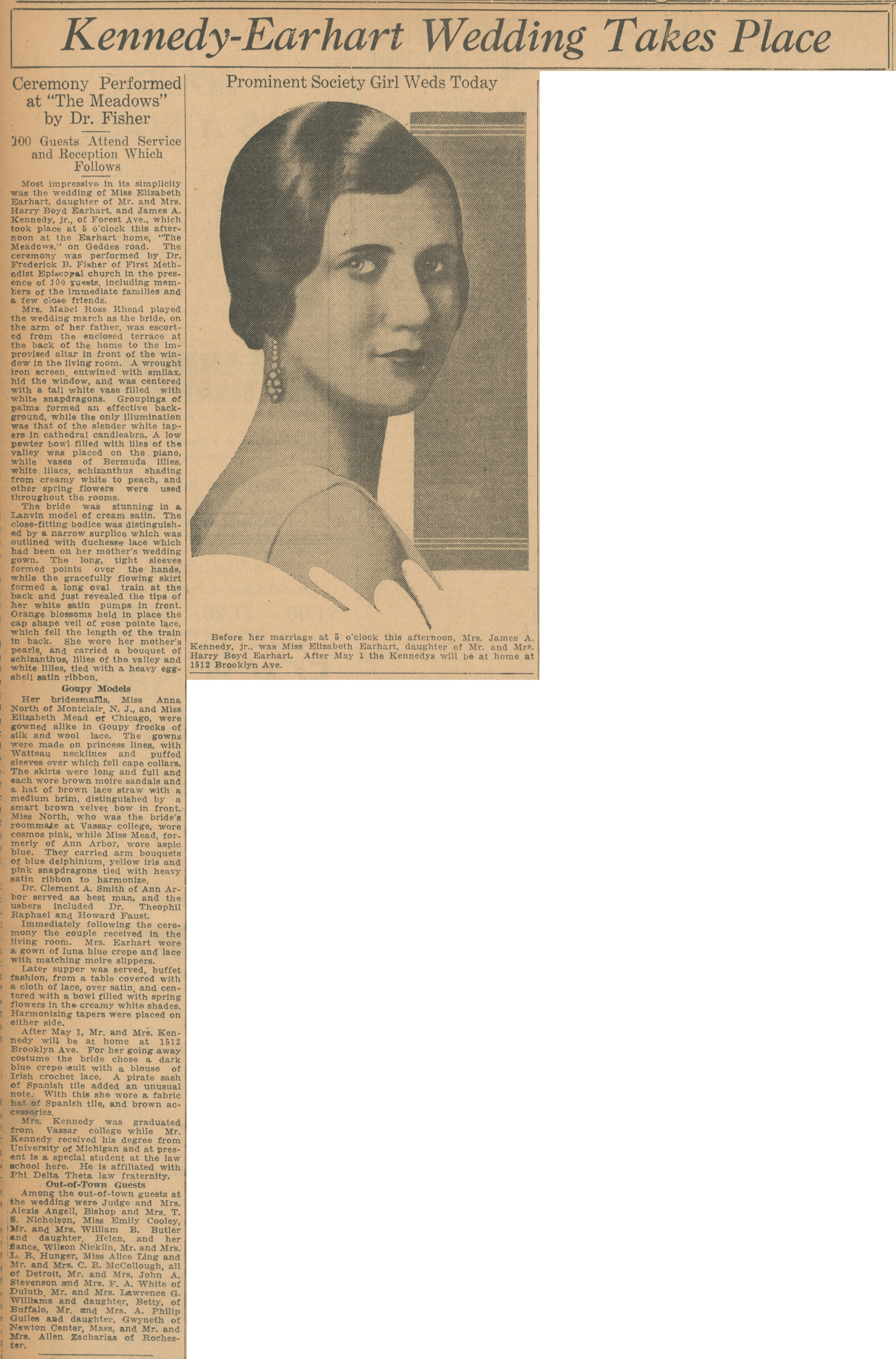 Ceremony Performed at “The Meadows” by Dr. Fisher

Most impressive in its simplicity was the wedding of Miss Elizabeth Earhart, daughter of Mr. and Mrs. Harry Boyd Earhart, and James A. Kennedy, jr., of Forest Ave., which took place at 5 o’clock this afternoon at the Earhart home, “The Meadows,” on Geddes road. The ceremony was performed by Dr. Frederick B. Fisher of First Methodist Episcopal church in the presence of 100 guests, including members of the immediate families and a few close friends.
Mrs. Mabel Ross Rhead played the wedding march as the bride, on the arm of her father, was escorted from the enclosed terrace at the back of the home to the improvised altar in front of the window in the living room. A wrought iron screen, entwined with smilax, hid the window, and was centered with a tall white vase filled with white snapdragons. Groupings of palms formed an effective background, while the only illumination was that of the slender white tapers in cathedral candelabra. A low pewter bowl filled with lilies of the valley was placed on the piano, while vases of Bermuda lilies, white lilacs, schizanthus shading from creamy white to peach, and other spring flowers were used throughout the rooms.
The bride was stunning in a Lanvin model of cream satin. The close-fitting bodice was distinguished by a narrow surplice which was outlined with duchesse lace which had been on her mother’s wedding gown. The long, tight sleeves formed points over the hands, while the gracefully flowing skirt formed a long oval train at the back and just revealed the tips of her white satin pumps in front. Orange blossoms held in place the cap shape veil of rose pointe lace, which fell the length of the train in back. She wore her mother’s pearls, and carried a bouquet of schizanthus, lilies of the valley and white lilies, tied with a heavy egg-shell satin ribbon.

Goupy Models
Her bridesmaids, Miss Anna North of Montclair, N. J., and Miss Elizabeth Mead of Chicago, were gowned alike in Goupy frocks of silk and wool lace. The gowns were made on princess lines, with Watteau necklines and puffed sleeves over which fell cape collars. The skirts were long and full and each wore brown moire sandals and a hat of brown lace straw with a medium brim, distinguished by a smart brown velvet bow in front. Miss North, who was the bride’s roommate at Vassar college, wore cosmos pink, while Miss Mead, formerly of Ann Arbor, wore aspic blue. They carried arm bouquets of blue delphinium, yellow iris and pink snapdragons tied with heavy satin ribbon to harmonize.
Dr. Clement A. Smith of Ann Arbor served as best man, and the ushers included Dr. Theophil Raphael and Howard Faust.
Immediately following the ceremony the couple received in the living room. Mrs. Earhart wore a gown of luna blue crepe and lace with matching moire slippers.
Later supper was served, buffet fashion, from a table covered with a cloth of lace, over satin, and centered with a bowl filled with spring flowers in the creamy white shades. Harmonizing tapers were placed on either side.
After May 1, Mr. and Mrs. Kennedy will be at home at 1512 Brooklyn Ave. For her going away costume the bride chose a dark blue crepe suit with a blouse of Irish crochet lace. A pirate sash of Spanish tile added an unusual note. With this she wore a fabric hat of Spanish tile, and brown accessories.
Mrs. Kennedy was graduated from Vassar college while Mr. Kennedy received his degree from University of Michigan and at present is a special student at the law school here. He is affiliated with Phi Delta Theta law fraternity.

IMAGE TEXT: PROMINENT SOCIETY GIRL WEDS TODAY: Before her marriage at 5 o’clock this afternoon, Mrs. James A. Kennedy, jr., was Miss Elizabeth Earhart, daughter of Mr. and Mrs. Harry Boyd Earhart. After May 1 the Kennedys will be at home at 1512 Brooklyn Ave.