Mr. and Mrs. Lawrence E. Ouimet Honored At Reception Given By Bride's Parents 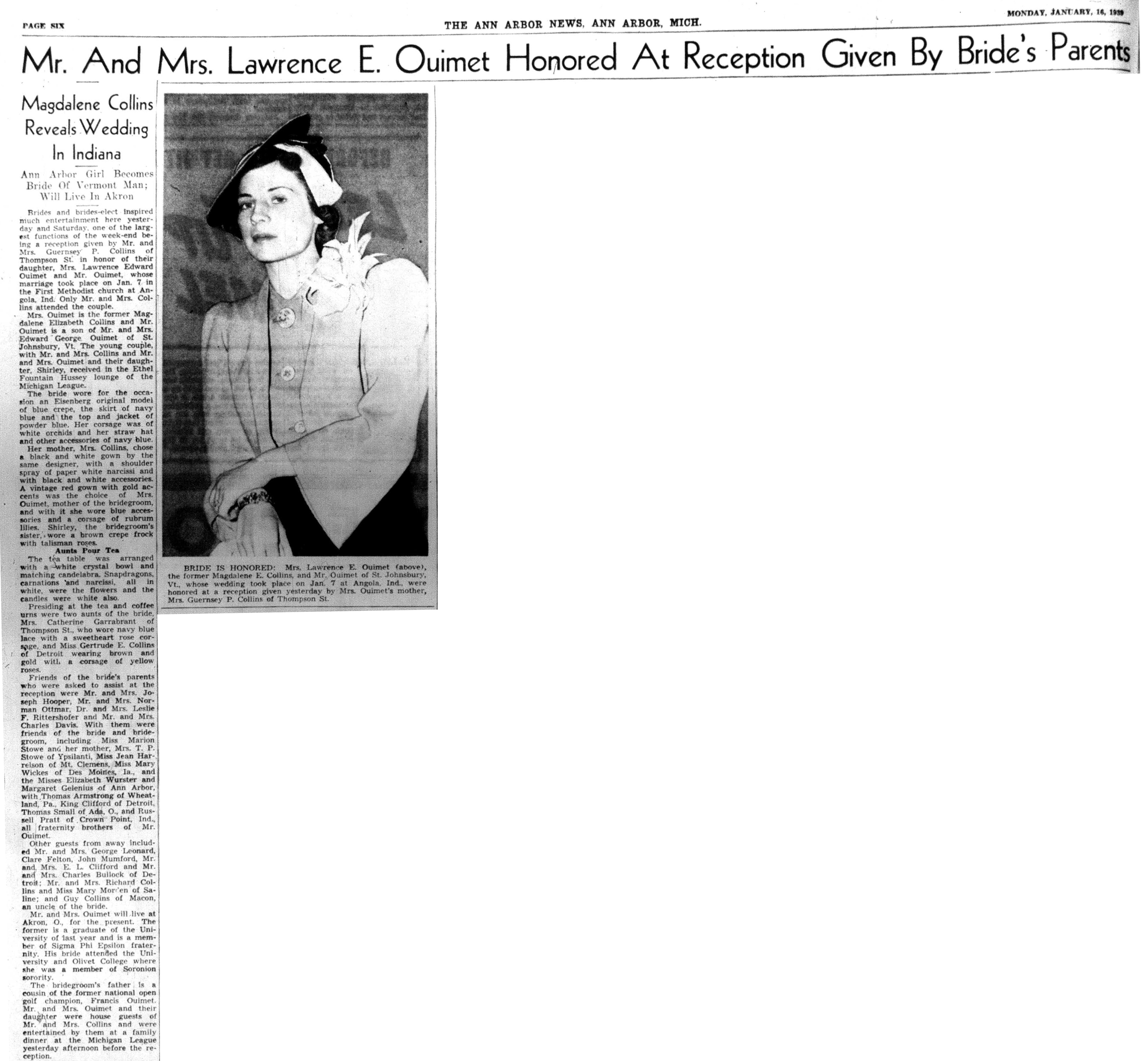 Mr. And Mrs. Lawrence E. Ouimet Honored At Reception Given By Bride's Parents

Brides and brldes-elect Inspired much entertainment here yesterday and Saturday, one of the largest functions of the week-end being a reception given by Mr. and Mrs. Guernsey P. Collins of Thompson St. in honor of their daughter, Mrs. Lawrence Edward Ouimet and Mr. Ouimet, whose marriage took place on Jan. 7 in the First Methodist church at Angola, Ind. Only Mr. and Mrs. Collins attended the couple.

The bride wore for the occasion an Eisenberg original model of blue crepe, the skirt of navy blue and the top and jacket of powder blue. Her corsage was of white orchids and her straw hat and other accessories of navy blue.

Her mother. Mrs. Collins, chose a black and white gown by the same designer, with a shoulder spray of paper white narcissi and with black and white accessories. A vintage red gown with gold accents was the choice of Mrs. Ouimet, mother of the bridegroom, and with it she wore blue accessories and a corsage of rubrum lilies. Shirley, the bridegroom’s sister, wore a brown crepe frock with talisman roses.

The tea table was arranged with a white crystal bowl and matching candelabra. Snapdragons, carnations and narcissi, all in white, were the flowers and the candles were white also.

Presiding at the tea and coffee urns were two aunts of the bride, Mis. Catherine Garrabrant of Thompson St., who wore navy blue lace with a sweetheart rose corsage, and Miss Gertrude E. Collins of Detroit wearing brown and gold with a corsage of yellow

Friends of the bride's parents who were asked to assist at the reception were Mr. and Mrs. Joseph Hooper, Mr. and Mrs. Norman Ottmar, Dr. and Mis. Leslie F. Rittershofer and Mr. and Mrs. Charles Davis. With them were friends of the bride and bridegroom, including Miss Marion Stowe and her mother, Mrs. T. P. Stowe of Ypsilanti, Miss Jean Harrelson of Mt. Clemens, Miss Mary Wickes of Des Moines, la., and the Misses Elizabeth Wurster and Margaret Gelenius of Ann Arbor, with Thomas Armstrong of Wheatland, Pa., King Clifford of Detroit, Thomas Small of Ada. O., and Russell Pratt of Crown Point. Ind., all fraternity brothers of Mr. Ouimet.

Other guests from away Included Mr. and Mrs. George Leonard, Clare Felton, John Mumford, Mr. and Mrs. E. L. Clifford and Mr. and Mrs. Charles Bullock of Detroit; Mr. and Mrs Richard Collins and Miss Mary Morden of Saline; and Guy Collins of Macon, an uncle of the bride.

The bridegroom's father Is a cousin of the former national open golf champion, Francis Ouimet. Mr and Mrs. Ouimet and their daughter were house guests of Mr. and Mrs. Collins and were entertained by them al a family dinner at the Michigan League yesterday afternoon before the reception.