$750,000 Spent On 1938 WPA Improvements In County - District Head Turns In Report For Washtenaw - Forty Projects Carried On, Of Which Half Were In Ann Arbor 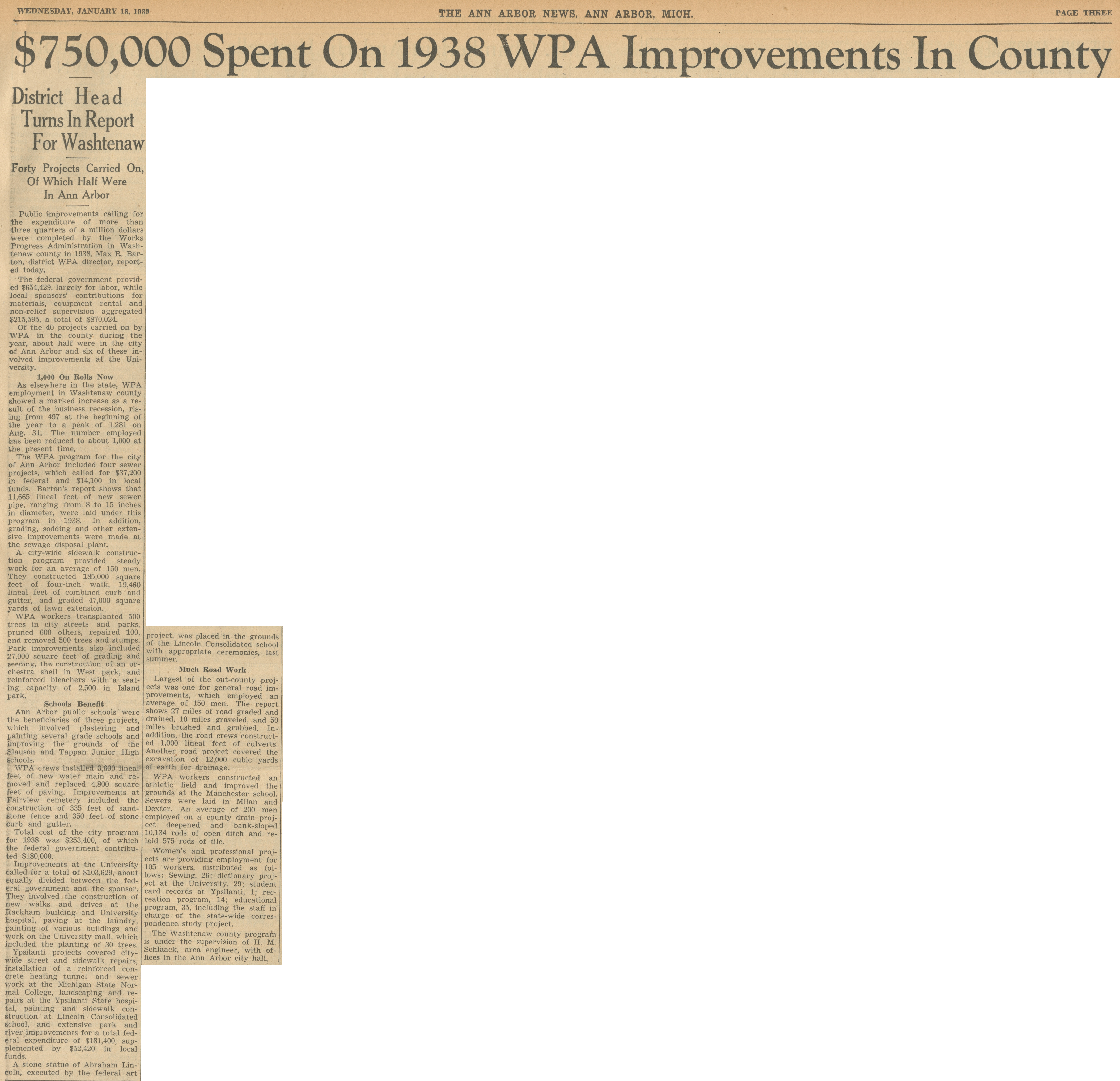 Forty Projects Carried On, Of Which Half Were In Ann Arbor

Public improvements calling for the expenditure of more than three quarters of a million dollars were completed by the Works Progress Administration in Washtenaw county in 1938, Max R. Barton, district WPA director, reported today.

The federal government provided $654,429, largely for labor, while local sponsors’ contributions for materials, equipment rental and non-relief supervision aggregated $215,595, a total of $870,024.

Of the 40 projects carried on by WPA in the county during the year, about half were in the city of Ann Arbor and six of these involved improvements at the University.

As elsewhere in the state, WPA employment in Washtenaw county showed a marked increase as suit of the business recession ing from 497 at the beginning of the year to a peak of 1,281 on Aug. 31. The number employed has been reduced to about 1,000 at the present time.

The WPA program for the city of Ann Arbor included four sewer projects, which called for $37,200 in federal and $14,100 in local funds. Barton’s report shows that 11,665 lineal feet of new sewer pipe, ranging from 8 to 15 inches in diameter, were laid under this program in 1938. In addition, grading, sodding and other extensive improvements were made at the sewage disposal plant.

WPA workers transplanted 500 trees in city streets and parks, pruned 600 others, repaired 100, and removed 500 trees and stumps. Park improvements also included 27,000 square feet of grading and seeding, the construction of an orchestra shell in West park, and reinforced bleachers with a seating capacity of 2,500 in Island park.

Ann Arbor public schools the beneficiaries of three projects, which involved plastering and painting several grade schools and improving the grounds of the Slauson and Tappan Junior High schools.

Improvements at the University called for a total of $103,629, about equally divided between the federal government and the sponsor. They involved the construction of new walks and drives at the Rackham building and University hospital, paving at the laundry, painting of various buildings and work on the University mall, which included the planting of 30 trees.

Ypsilanti projects covered citywide street and sidewalk repairs, installation of a reinforced concrete heating tunnel and sewer work at the Michigan State Normal College, landscaping and repairs at the Ypsilanti State hospital, painting and sidewalk construction at Lincoln Consolidated school, and extensive park and river improvements for a total federal expenditure of $181,400, supplemented by $52,420 in local funds.

A stone statue of Abraham Lincoln, executed by the federal art project, was placed in the grounds of the Lincoln Consolidated school with appropriate ceremonies, last summer.

Largest of the out-county projects was one for general road improvements, which employed an average of 150 men. The report shows 27 miles of road graded and drained, 10 miles graveled, and 50 miles brushed and grubbed. In addition, the road crews constructed 1,000 lineal feet of culverts. Another road project covered the excavation of 12,000 cubic yards if earth for drainage.

WPA workers constructed an athletic field and improved the grounds at the Manchester school. Sewers were laid in Milan and Dexter. An average of 200 men employed on a county drain project deepened and bank-sloped 10,134 rods of open ditch and re-laid 575 rods of tile.

Women's and professional projects are providing employment for 105 workers, distributed as follows: Sewing, 26; dictionary project at the University, 29; student card records at Ypsilanti, 1; recreation program, 14; educational program, 35, including the staff in charge of the state-wide correspondence study project.

The Washtenaw county program is under the supervision of H. M. Schlaack, area engineer, with offices in the Ann Arbor city hall.