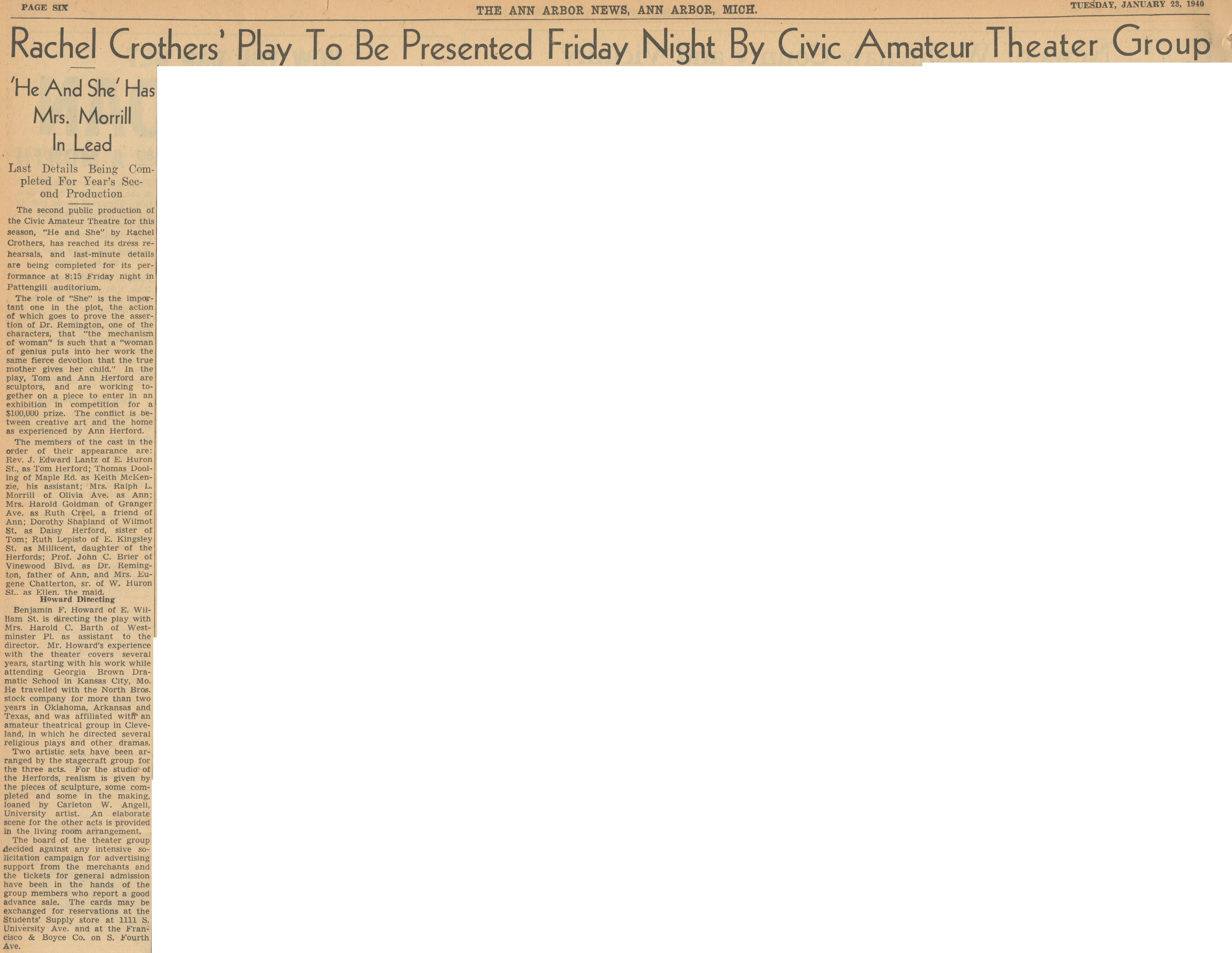 'He And She' Has Mrs. Morrill In Lead

The second public production of the Civic Amateur Theatre for this season, "He and She" by Rachel Crothers, has reached its dress rehearsals, and last-minute details are being completed for its performance at 8:15 Friday night in Pattengill auditorium.

The role of "She" is the important one in the plot, the action of which goes to prove the assertion of Dr. Remington, one of the characters, that "the mechanism of woman" is such that a "woman of genius puts into her world the same fierce devotion that the true mother gives her child." In the play, Tom and Ann Herford are sculptors, and are working together on a piece to enter in an exhibition in competition for a $100,000 price. The conflict i between creative art and the home as experienced by Ann Herford.

The members of the cast in the order of their appearance are: Rev. J. Edward Lantz of E. Huron St., as Tom Herford; Thomas Dooling of Maple Rd. as Keith McKenzie, his assistant; Mrs. Ralph L. Morill of Olivia Ave. as Ann, Mrs. Harold Goldman of Granger Ave. as Ruth Creel, a friend of Ann, Dorothy Shapland of Wilmot St. as Daisy Herford, sister of Tom; Ruth Lepsito of E. Kinglsey St. as Millicent, daughter of the Herfords; Prof John C. Brier of Vinewood Blvd. as Dr. Remington, father of Ann, and Mrs. Eugene Chatterton, sr. of W. Huron St. as Ellen, the maid.

Benjamin F. Howard of E. William St. is directing the play with Mrs. Harold C. Barth of Westminster Pl. as assistant to the director. Mr. Howard's experience with the theater covers several years, starting with his work while attending Georgia Brown Dramatic School in Kansas City, Mo. He travelled with North Bros. stock company for more than two years in Oklahoma, Arkansas and Texas, and was affiliated with an amateur theatrical group in Cleveland, in which he directed several religious plays and other dramas.

Two artistic sets have been arranged by the stagecraft group for the three acts. For the studio of the Herfords, realism is given by the pieces of sculpture, some completed and in the making, loaned by Carleton W. Angell, University artist. An elaborate scene for the other acts is provided in the living room arrangement.

The board of the theater group decided against any intensive solicitation campaign for advertising support from the merchants and the tickets for general admission have been in the hands of group members who report a good advance sale. The cards may be exchanged for reservations at 1111 S. University Ave. and at the Francisco  & Boyce Co. on S. Fourth Ave.