Mills At Clinton Fill Navy Order: "Swing-Over" For Defense Job Would Be Easy 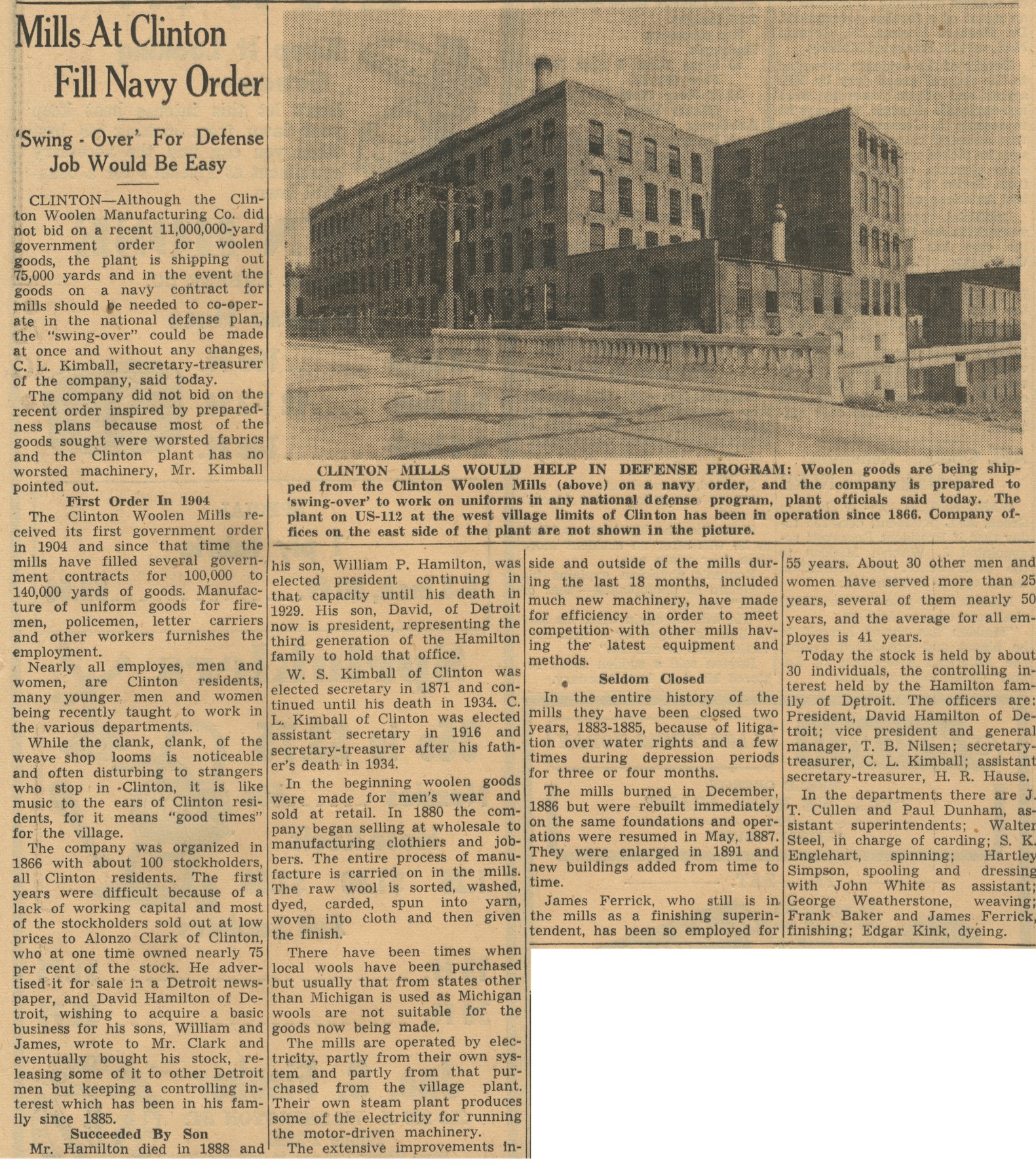 'Swing - Over' For Defense Job Would Be Easy

CLINTON - Although the Clinton Woolen Manufacturing Co. did not bit on a recent 11,000,000-yard government order for woolen goods, the plant is shipping out 75,000 yards and in the event the goods on a navy contract for mills should be needed to co-operate in the national defense plan, the "swing-over" could be made at once and without any changes, C. L. Kimball, secretary-treasurer of the company, said today.

The company did not bid on the recent order inspired by preparedness plans because most of the goods sought were worsted fabrics and the Clinton plant has no worsted machinery, Mr. Kimball pointed out.

The Clinton Woolen Mills received its first government order in 1904 and since that time the mills have filled several government contracts for 100,000 to 140,000 yards of goods. Manufacture of uniform goods for firemen, policemen, letter carriers and other workers furnishes the employment.

Nearly all employes, men and women, are Clinton residents, many younger men and women being recently taught to work in the various departments.

While the clank, clank, of weave shop looms is noticeable and often disturbing to strangers who stop in Clinton, it is like music to the ears of Clinton residents, for it means "good times" for the village.

The company was organized in 1866 with about 100 stockholders, all Clinton residents. The first years were difficult because of a lack of working capital and most of the stockholders sold out at low prices to Alonzo Clark of Clinton, who at one time owned nearly 75 per cent of the stock. He advertised it for sale in a Detroit newspaper, and David Hamilton of Detroit, wising to acquire a basic business for this sons, William and James, wrote to Mr. Clark and eventually bought his stock, releasing some of it to other Detroit men but keeping a controlling interest which as been in his family since 1885.

Mr. Hamilton died in 1888 and his son, William P. Hamilton, was elected president continuing in that capacity until his death in 1929. His son, David, of Detroit now is president, representing the third generation of the Hamilton family to hold that office.

In the beginning woolen goods were made for men's wear and sold at retail. in 1880 the company began selling at wholesale to manufacturing clothiers and jobbers. The entire process of manufacture is carried on in the mills. The raw wool is sorted, washed, dyed, carded, spun into yarn, woven into cloth and then given the finish.

There have been times when local wools have been purchased but usually that from states other than Michigan is used as Michigan wools are not suitable for the goods now being made.

The mills are operated by electricity, party from their own system and partly from that purchased from the village plant. Their own stream plant produces some of the electricity for running the motor-driven machinery.

The extensive improvements inside and outside of the mills during the last 18 months, included much new machinery, have made for efficiency in order to meet competition with other mills having the latest equipment and methods.

In the entire history of the mills they have been closed two years, 1883-1885, because of litigation over water rights and a few times during depression periods for three or four months.

The mills burned in December, 1886 but were rebuilt immediately on the same foundations and operations were resumed May, 1887. They were enlarged in 1891 and new buildings added from time to time.

James Ferrick, who still is in the mills as a finishing superintendent, has been so employed for 55 years. About 30 other men and women have served more than 25 years, several of them nearly 50 years, and the average for all employes is 41 years.

CLINTON MILLS WOULD HELP IN DEFENSE PROGRAM: Woolen goods are being shipped from the Clinton Woolen Mills (above) on a navy order, and the company is prepared to 'swing-over' to work on uniforms in any national defense program, plant officials said today. The plant on US-112 at the west village limits of Clinton has been in operation since 1866. Company offices on the east side of the plant are not shown in the picture.