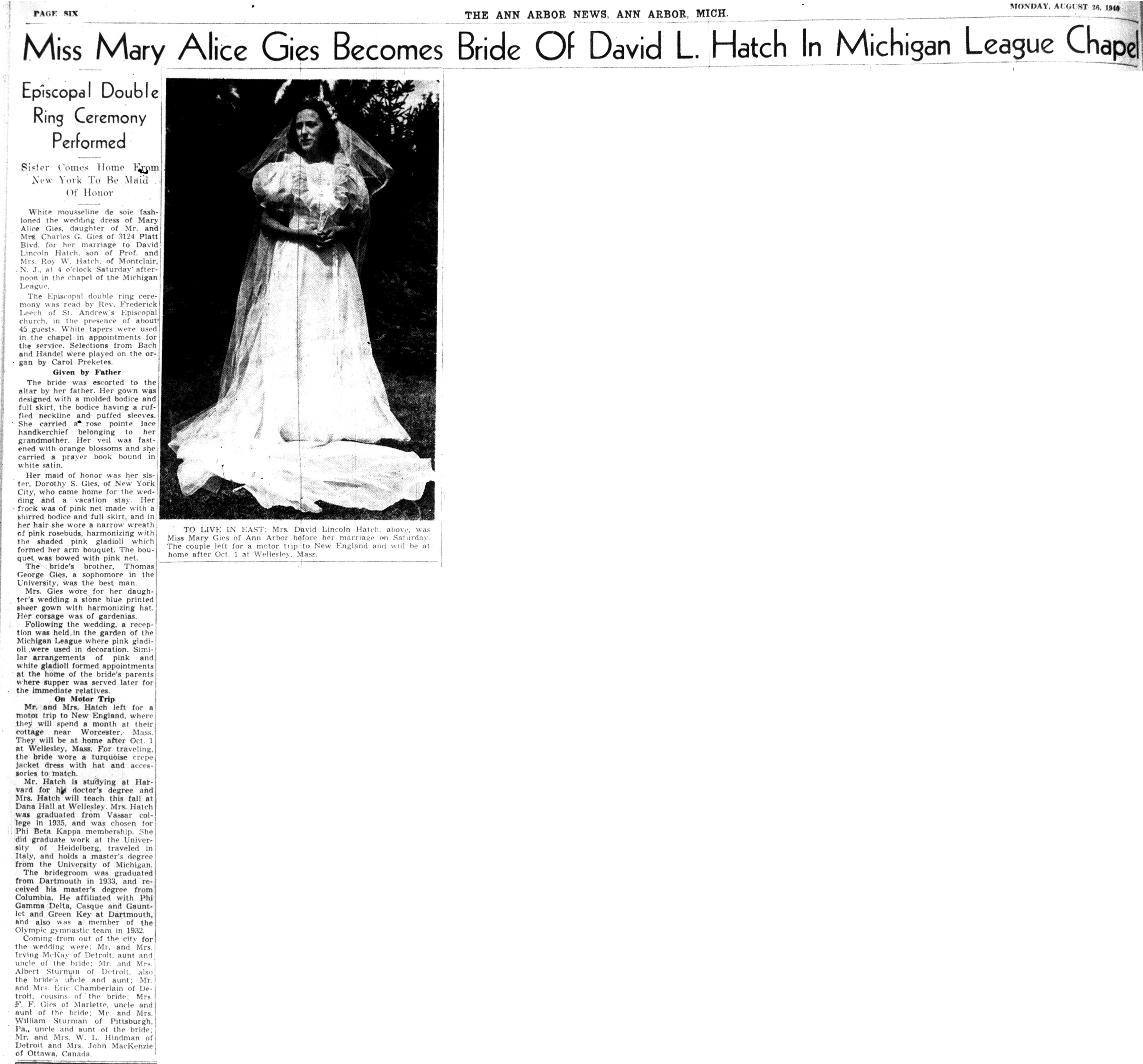 Now York To Be Mti'd

White mousseline de sole fashioned the wedding dress of Mary Alice Gies, daughter of Mr. and Mrs. Charles G. Gies of 3124 Platt Blvd. for her marriage to David Lincoln Hatch, son of Prof, and Mrs. Ron W. Hatch, of Montclair, N. J., at 4 o’clock Saturday afternoon in the chapel of the Michigan League.

The Episcopal double ring ceremony was read by Rev. Frederick Leech of St. Andrew's Episcopal church, in the presence of about 45 guests. White tapers were used in the chapel in appointments for the service. Selections from Bach and Handel were played on the organ by Carol Preketes.

The bride was escorted to the altar by her father. Her gown was designed with a molded bodice and full skirt, the bodice having a ruffled neckline and puffed sleeves. She carried a rose pointe lace belonging to her grandmother. Her veil was fastened with orange blossoms and she carried a prayer book bound in white satin.

Her maid of honor was her sister. Dorothy S. Gies, of New York City, who came home for the wedding and a vacation stay. Her frock was of pink net made with a shirred bodice and full skirt, and in her hair she wore a narrow wreath of pink rosebuds, harmonizing with the shaded pink gladioli which formed her arm bouquet. The bouquet was bowed with pink net.

The bride’s brother, Thomas George Gies, a sophomore in the University, was the best man.

Mrs. Gies wore for her daughter’s wedding a stone blue printed sheer gown with harmonizing hat. Her corsage was of gardenias.

Following the wedding, a reception was held in the garden of the Michigan League where pink gladioli were used in decoration. Similar arrangements of pink and white gladioli formed appointments at the home of the bride’s parents where supper was served later for the immediate relatives.

Mr. and Mrs. Hatch left for a motor trip to New England, where they will spend a month at their cottage near Worcester,  Mass. They will be at home after Oct. 1 at Wellesley, Mass. For traveling, the bride wore a turquoise crepe jacket dress with hat and accessories to match.

Mr. Hatch is studying at Harvard for doctor's degree and Mrs. Hatch will teach this fall at Dana Hall at Wellesley. Mrs. Hatch was graduated from Vassar college in 1935, and was chosen for Phi Beta Kappa membership. She did graduate work at the University of Heidelberg, traveled in Italy, and holds a master's degree from the University of Michigan.

The bridegroom was graduated from Dartmouth in 1933, and received his master’s degree from Columbia. He affiliated with Phi Gamma Delta, Casque and Gauntlet and Green Key at Dartmouth, and also was a member of the Olympic gymnastic team in 1932.

TO LIVE IN EAST: Mrs. David Lincoln Hatch, above, was Miss Mary Gies of Ann Arbor before her marriage on Saturday. The couple left for a motor trip to New England and will be at home after Oct. 1 at Wellesley, Mass.