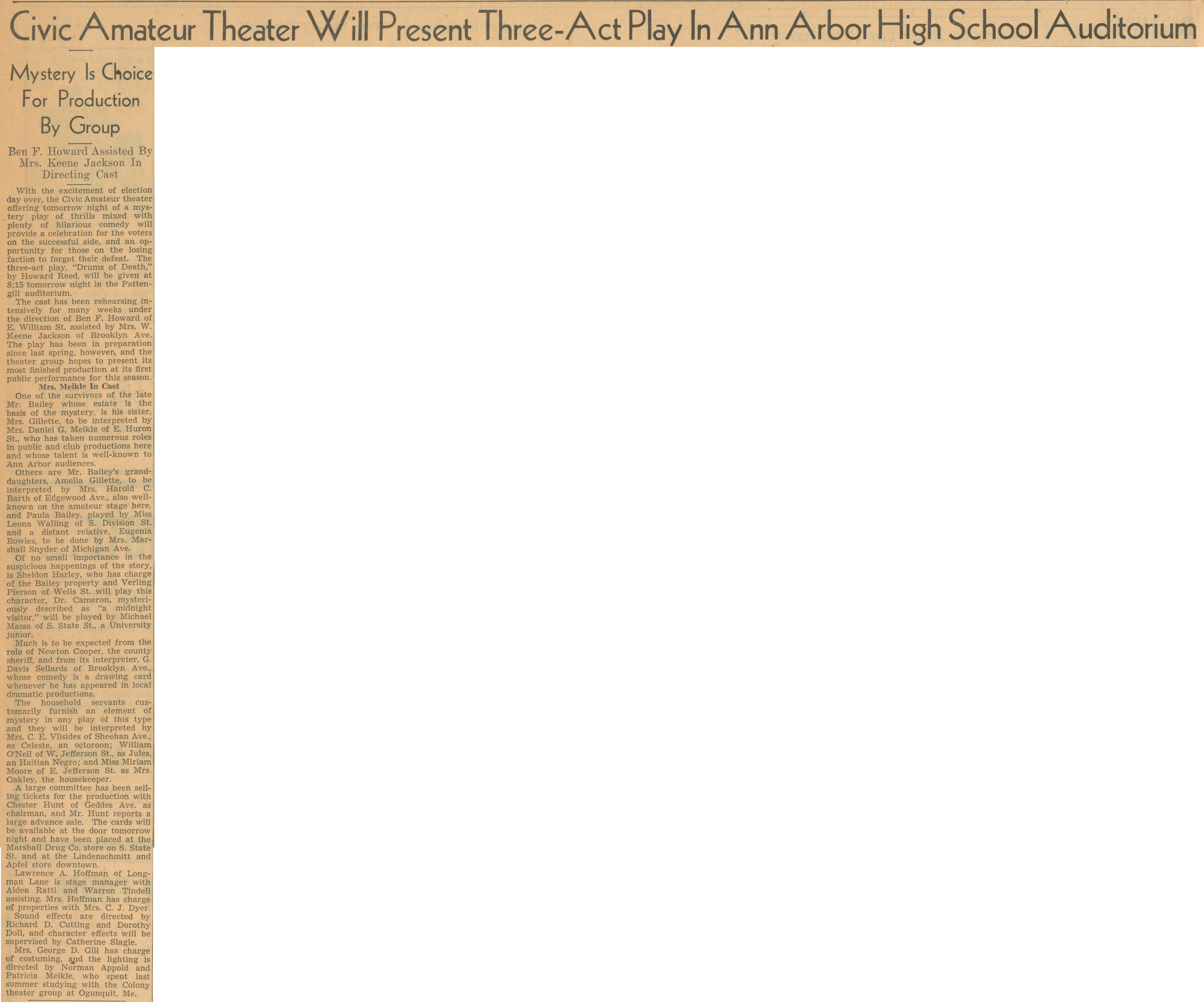 Mystery Is Choice For Production By Group

With the excitement of election day over, the Civic Amateur theater offering tomorrow night of a mystery play of thrills mixed with plenty of hilarious comedy will provide a celebration for the voters on the successful side, and an opportunity for those on the losing faction to forget their defeat. The three-act play, “Drums of Death,” by Howard Reed, will be given at 8:15 tomorrow night in the Pattengill auditorium.

The cast has been rehearsing intensively for many weeks under the direction of Ben F. Howard of E. William St. assisted by Mrs. W. Keene Jackson of Brooklyn Ave. The play has been in preparation since last spring, however, and the theater group hopes to present its most finished production at its first public performance for this season.

One of the survivors of the late Mr. Bailey whose estate is the basis of the mystery, is his sister, Mrs. Gillette, to be interpreted by Mrs. Daniel G. Meikle of E. Huron St., who has taken numerous roles in public and club productions here and whose talent is well-known to Ann Arbor audiences.

Others are Mr. Bailey’s granddaughters, Amelia Gillette, to be interpreted by Mrs. Harold C. Barth of Edgewood Ave., also well-known on the amateur stage here, and Paula Bailey, played by Miss Leona Walling of S. Division St. and a distant relative, Eugenia Bowles, to be done by Mrs. Marshall Snyder of Michigan Ave.

Of no small importance in the suspicious happenings of the story, is Sheldon Harley, who has charge of the Bailey property and Verling Pierson of Wells St. will play this character, Dr. Cameron, mysteriously described as "a midnight visitor,” will be played by Michael Massa of S. State St., a University junior.

Much is to be expected from the role of Newton Cooper, the county sheriff, and from its interpreter, G. Davis Sellards of Brooklyn Ave., whose comedy is a drawing card whenever he has appeared in local dramatic productions.

The household servants customarily furnish an element of mystery in any play of this type and they will be interpreted by Mrs. C. E. Vlisides of Sheehan Ave., as Celeste, an octoroon; William O’Neil of W. Jefferson St., as Jules, an Haitian Negro; and Miss Miriam Moore of E. Jefferson St. as Mrs. Oakley, the housekeeper.

A large committee has been selling tickets for the production with Chester Hunt of Geddes Ave. as chairman, and Mr. Hunt reports a large advance sale. The cards will be available at the door tomorrow night and have been placed at the Marshall Drug Co. store on S. State St. and at the Lindenschmitt and Apfel store downtown.

Sound effects are directed by Richard D. Cutting and Dorothy Doll, and character effects will be supervised by Catherine Slagle.

Mrs. George D. Gill has charge of costuming, and the lighting is directed by Norman Appold and Patricia Meikle, who spent last summer studying with the Colony theater group at Ogunquit, Me.