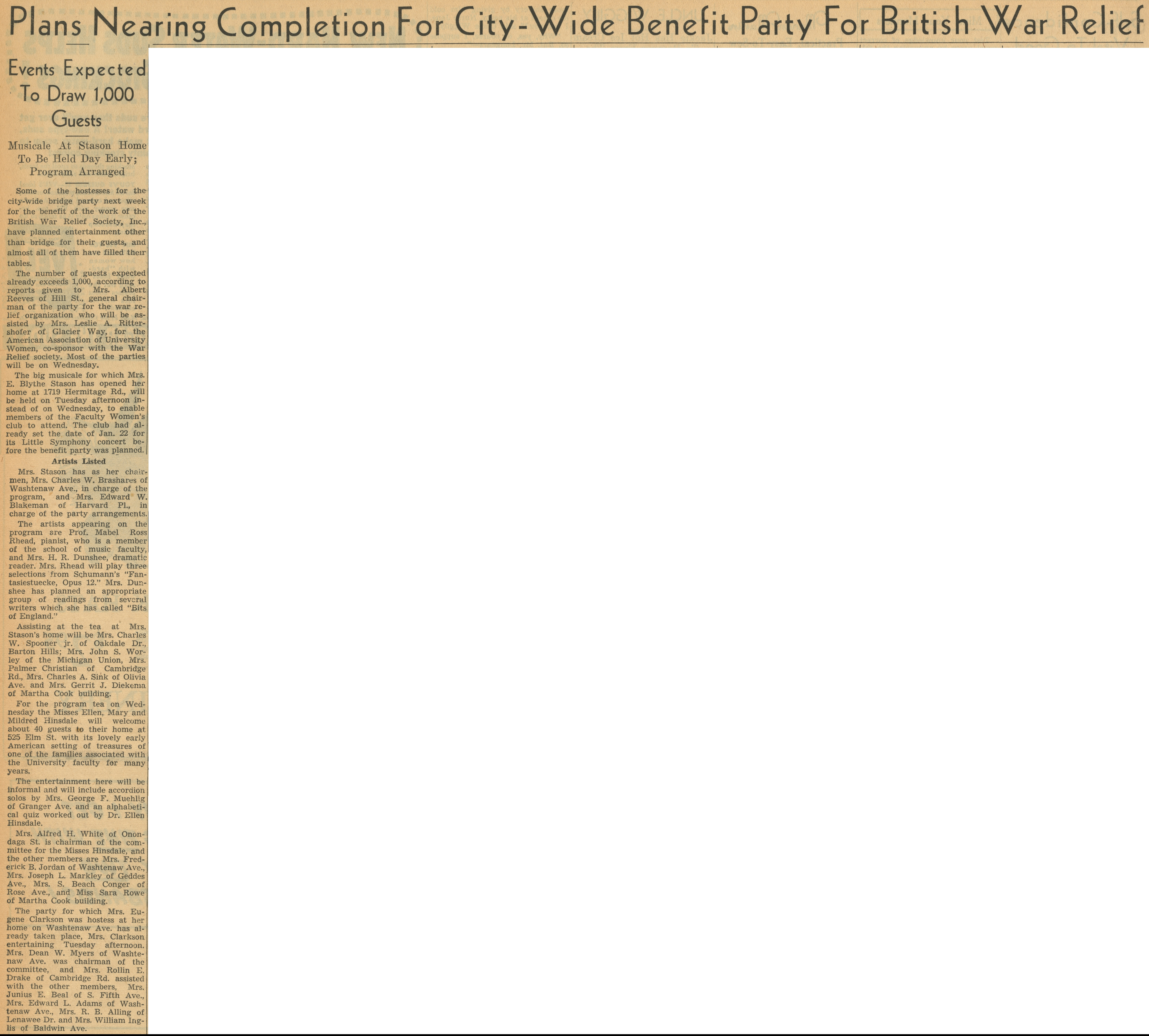 Some of the hostesses for the city-wide bridge party next week for the benefit of the work of the British War Relief Society, Inc., have planned entertainment other than bridge for their guests, and almost all of them have filled their tables.

The number of guests expected already exceeds 1,000, according to reports given to Mrs. Albert Reeves of Hill St., general chairman of the party for the war relief organization who will be assisted by Mrs. Leslie A. Rittershofer of Glacier Way, for the American Association of University Women, co-sponsor with the War Relief society. Most of the parties will be on Wednesday.

The big musicale for which Mrs. E. Blythe Stason has opened her home at 1719 Hermitage Rd., will be held on Tuesday afternoon instead of on Wednesday, to enable members of the Faculty Women’s club to attend. The club had already set the date of Jan. 22 for its Little Symphony concert before the benefit party was planned.

The artists appearing on the program are Prof. Mabel Ross Rhead, pianist, who is a member of the school of music faculty, and Mrs. H. R. Dunshee, dramatic reader. Mrs. Rhead will play three selections from Schumann's “Fantasiestuecke, Opus 12." Mrs. Dunshee has planned an appropriate group of readings from several writers which she has called “Bits of England.”

For the program tea on Wednesday the Misses Ellen, Mary and Mildred Hinsdale will welcome about 40 guests to their home at 525 Elm St. with its lovely early American setting of treasures of one of the families associated with the University faculty for many years.

The entertainment here will be informal and will include accordion solos by Mrs. George F. Muehlig of Granger Ave. and an alphabetical quiz worked out by Dr. Ellen Hinsdale.

Mrs. Alfred H. White of Onondaga St. is chairman of the committee for the Misses Hinsdale, and the other members are Mrs. Frederick B. Jordan of Washtenaw Ave., Mrs. Joseph L. Markley of Geddes Ave., Mrs. S. Beach Conger of Rose Ave., and Miss Sara Rowe of Martha Cook building.