Proceeds Of Woman's Club Card Party Next Tuesday To Be Given For British Relief: Red Cross Sewing Will Supplement Program 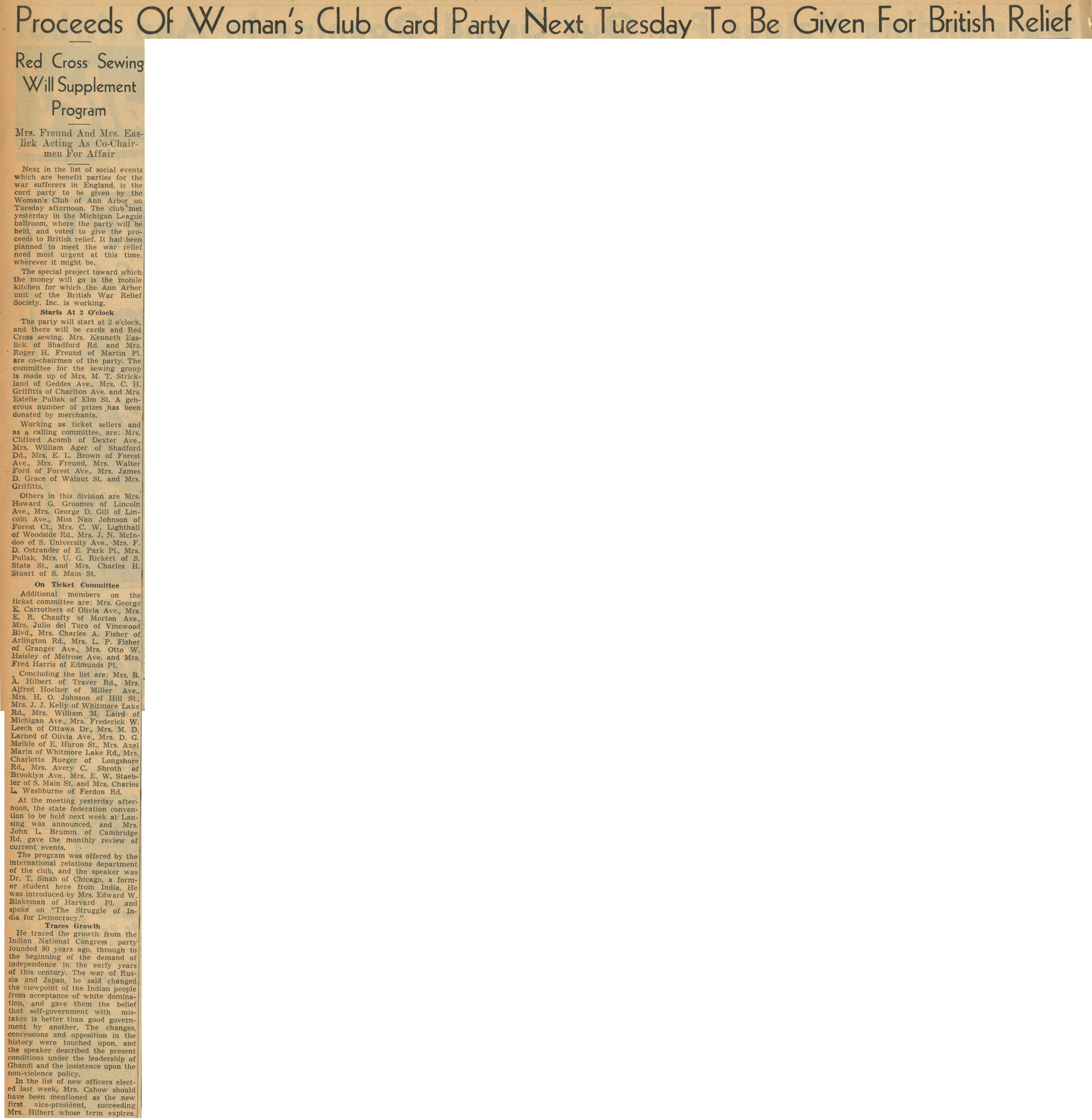 Mrs. Freund And Mrs. Easlick Acting As Co-Chairmen For Affair

Next in the list of social events which are benefit parties for the war sufferers in England, is the card party to be given by the Woman's Club of Ann Arbor on Tuesday afternoon. The club met yesterday in the Michigan League ballroom, where the party will be held, and voted to give the proceeds to British relief. It had been planned to meet the war relief need most urgent at this time, wherever it might be.

The special project toward which the money will go is the mobile kitchen for which the Ann Arbor unit of the British War Relief Society, Inc. is working.

The party will start at 2 o’clock, and there will be cards and Red Cross sewing. Mrs. Kenneth Easlick of Shadford Rd. and Mrs. Roger H. Freund of Martin Pl. are co-chairmen of the party. The committee for the sewing group is made up of Mrs. M. T. Strickland of Geddes Ave., Mrs. C. H. Griffitts of Charlton Ave. and Mrs. Estelle Pollak of Elm St. A generous number of prizes has been donated by merchants.

At the meeting yesterday afternoon, the state federation convention to be held next week at Lansing was announced, and Mrs. John L. Brumm of Cambridge Rd. gave the monthly review of current events.

The program was offered by the international relations department of the club, and the speaker was Dr. T. Sinah of Chicago, a former student here from India. He was introduced by Mrs. Edward W. Blakeman of Harvard PI. and spoke on “The Struggle of India for Democracy.”

He traced the growth from the Indian National Congress party founded 80 years ago, through to the beginning of the demand of independence in the early years of this century. The war of Russia and Japan, he said changed the viewpoint of the Indian people from acceptance of white domination, and gave them the belief that self-government with mistakes is better than good government by another. The changes, concessions and opposition in the history were touched upon, and the speaker described the present conditions under the leadership of Ghandi and the insistence upon the non-violence policy.

In the list of new officers elected last week, Mrs. Cahow should have been mentioned as the new first vice-president, succeeding Mrs. Hilbert whose term expires.