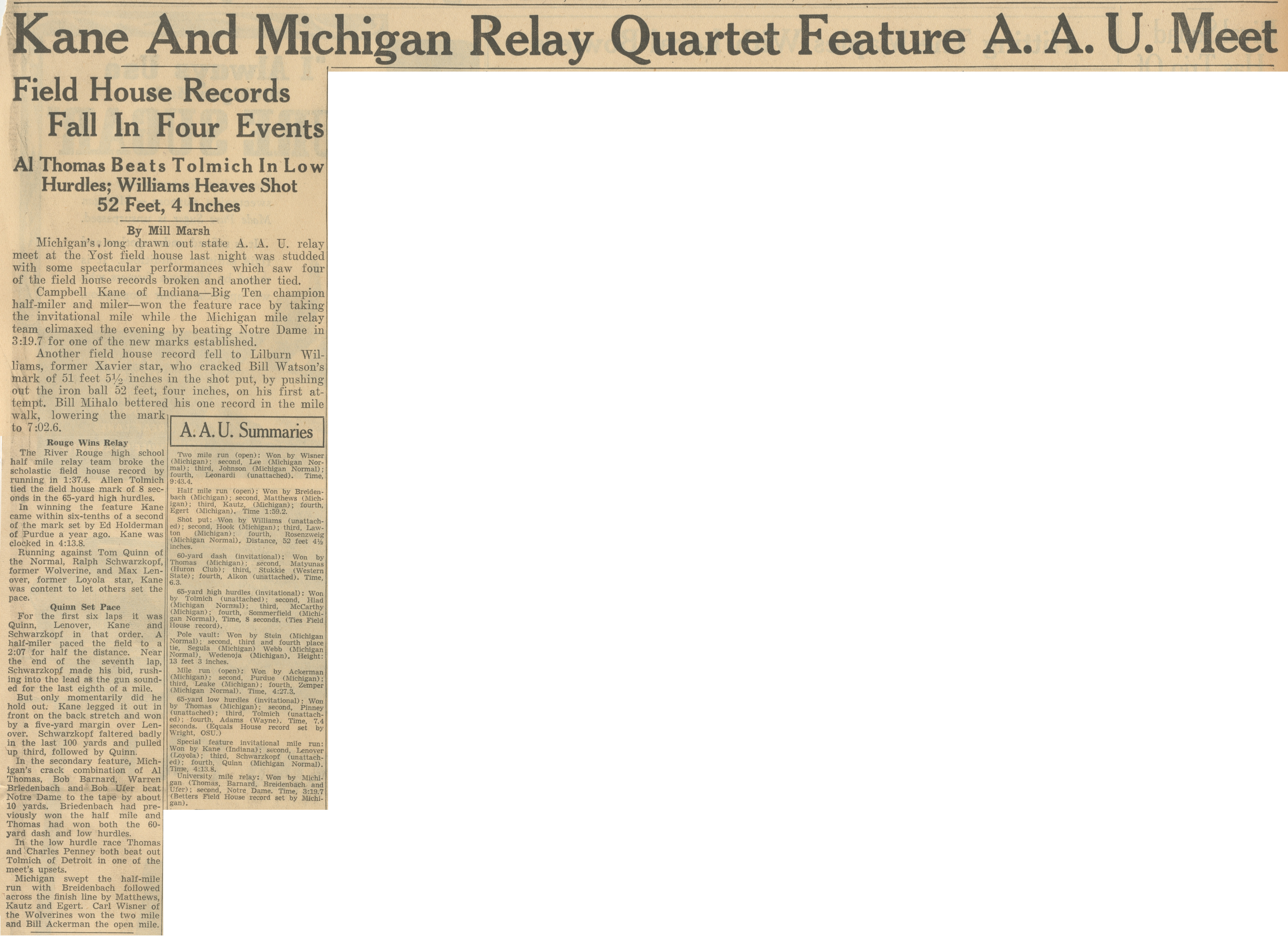 ﻿Kane And Michigan Relay Quartet Feature A. A. U. Meet

Michigan’s. long drawn out state A. A. U. relay meet at the Yost field house last night was studded with some spectacular performances which saw four of the field house records broken and another tied.

Campbell Kane of Indiana—Big Ten champion half-miler and miler—won the feature race by taking the invitational mile while the Michigan mile relay team climaxed the evening by beating Notre Dame in 3:19.7 for one of the new marks established.

Another field house record fell to Lilburn Williams, former Xavier star, who cracked Bill Watson’s mark of 51 feet 5 1/2 inches in the shot put, by pushing out the iron ball 52 feet, four inches, on his first attempt. Bill Mihalo bettered his one record in the mile walk, lowering the mark to 7:02.6.

In winning the feature Kane came within six-tenths of a second of the mark set by Ed Holderman of Purdue a year ago. Kane was clocked in 4:13.8.

Running against Tom Quinn of the Normal, Ralph Schwarzkopf, former Wolverine, and Max Lenover, former Loyola star, Kane was content to let others set the pace.

For the first six laps it was Quinn, Lenover, Kane a Schwarzkopf in that order. A half-miler paced the field to 2:07 for half the distance. Near the end of the seventh lap, Schwarzkopf made his bid, rushing into the lead as the gun sounded for the last eighth of a mile.

But only momentarily did he hold out. Kane legged it out in front on the back stretch and won by a five-yard margin over Lenover. Schwarzkopf faltered badly in the last 100 yards and pulled up third, followed by Quinn.

In the secondary feature, Michigan’s crack combination of Al Thomas, Bob Barnard, Warren Briedenbach and Bob Ufer beat Notre Dame to the tape by about 10 yards. Briedenbach had previously won the half mile and Thomas had won both the 60-yard dash and low hurdles.

In the low hurdle race Thomas and Charles Penney both beat out Tolmich of Detroit in one of the meet’s upsets.

Michigan swept the half-mile run with Breidenbach followed across the finish line by Matthews, Kautz and Egert. Carl Wisner of the Wolverines won the two mile and Bill Ackerman the open mile.