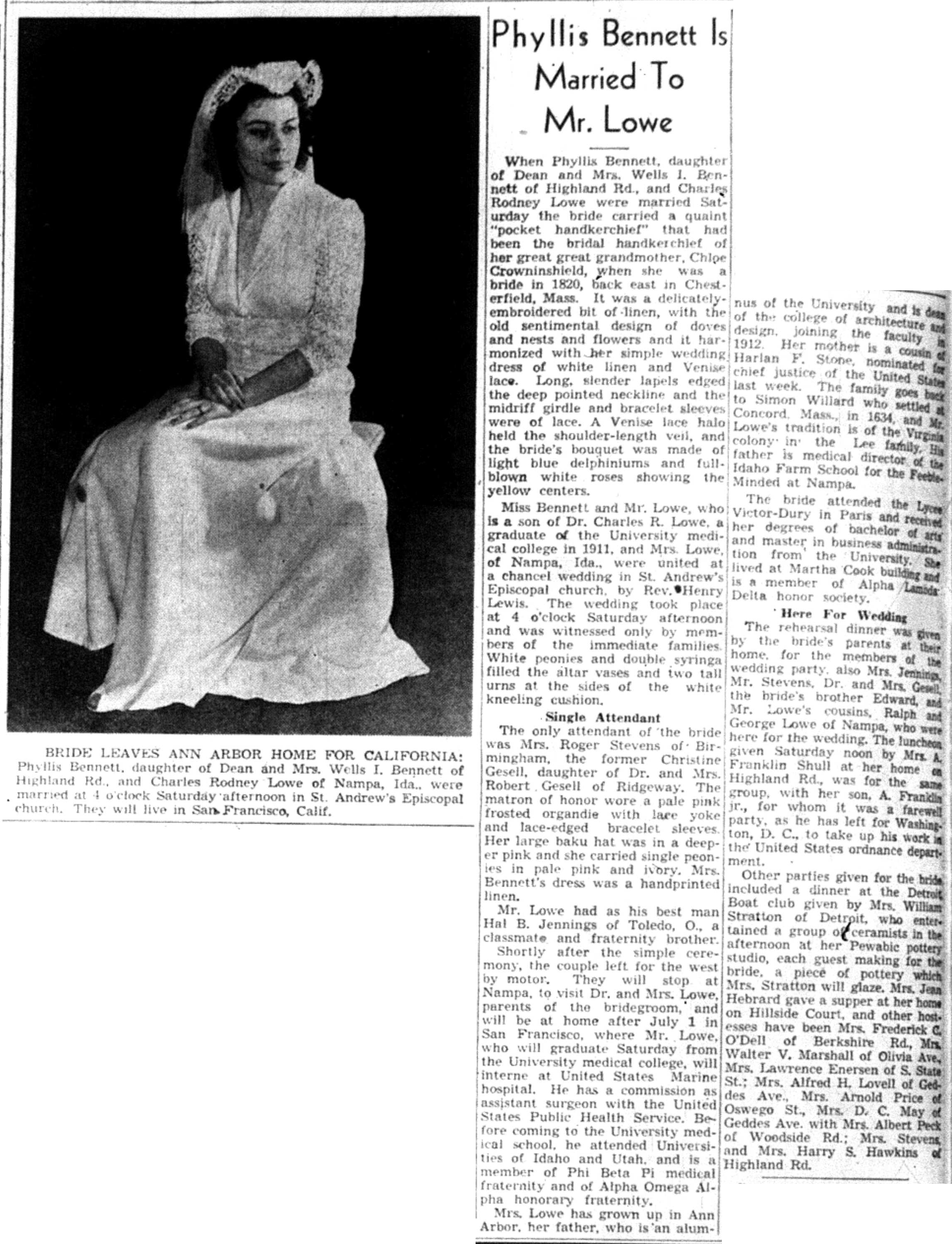 When Phyllis Bennett, daughter of Dean and Mrs. Wells I. Bennett of Highland Rd., and Charles Rodney Lowe were married Saturday the bride carried a quaint "pocket handkerchief" that had been the bridal handkerchief of her great great grandmother, Chloe Crowninshield, when she was a bride in 1820, back east in Chesterfield, Mass. It was a delicately-embroidered bit of linen, with the old sentimental design of doves and nests and flowers and it harmonized with her simple wedding dress of white linen and Venise lace. Long, slender lapels edged the deep pointed neckline and the midriff girdle and bracelet sleeves were of lace. A Venise lace halo held the shoulder-length veil, and the bride's bouquet was made of light blue delphiniums and full-blown white roses showing the yellow centers.

Miss Bennett and Mr. Lowe, who Is a son of Dr. Charles R. Lowe, a graduate of the University medical college in 1911, and Mrs. Lowe of Nampa, Ida., were united at a chancel wedding in St. Andrew’s Episcopal church, by Rev. Henry Lewis. The wedding took place at 4 o'clock Saturday afternoon and was witnessed only by members of the immediate families. White peonies and double syringa filled the altar vases and two tall urns at the sides of the white kneeling cushion.

The only attendant of the bride was Mrs. Roger Stevens of Birmingham, the former Christine Gesell, daughter of Dr. and Mrs. Robert Gesell of Ridgeway. The matron of honor wore a pale pink frosted organdie with lace yoke and lace-edged bracelet sleeves. Her large baku hat was in a deeper pink and she carried single peonies in pale pink and ivory. Mrs. Bennett's dress was a handprinted linen.

Mr. Lowe had as his best man Hal B. Jennings of Toledo, O., a classmate and fraternity brother.

Shortly after the simple ceremony, the couple left for the west by motor. They will stop at Nampa, to visit Dr. and Mrs. Lowe, parents of tho bridegroom, and will be at home after July 1 in San Francisco, where Mr. Lowe, who will graduate Saturday from the University medical college, will intern at United States Marine hospital. He has a commission as assistant surgeon with the United States Public Health Service. Before coming to the University medical school, he attended Universities of Idaho and Utah, and is a member of Phi Beta Pi medical fraternity and of Alpha Omega Alpha honorary fraternity.

Mrs. Lowe has grown up in Ann Arbor, her father, who is an alumnus of the University and is of the college of architecture and design, joining the faculty in 1912. Her mother is a cousin of Harlan F. Stone, nominated for chief justice of the United last week. The family goes to Simon Willard who settled at Concord, Mass., in 1634 and Mr. Lowe's tradition is of the Virginia colony in the Lee family. His father is medical director of the Idaho Farm School for the Feeble-Minded at Nampa.

The bride attended the Lycee Victor-Dury in Paris and received her degrees of bachelor of arts and master in business administration from the University. She lived at Martha Cook building and is a member of Alpha Lamda Delta honor society.

The rehearsal dinner was given by the bride's parents at their home, for the members of the wedding party, also Mrs. Jennings, Mr. Stevens, Dr. and Mrs. Gesell, the bride's brother Edward, Mr. Lowe's cousins, Ralph and George Lowe of Nampa, who were here for the wedding. The luncheon given Saturday noon by Mrs. A. Franklin Shull at her home on Highland Rd., was for the same group, with her son, A. Franklin, jr., for whom it was a farewell party, as he has left for Washington, D. C. to take up his work in the United States ordnance department.

Other parties given for the bride included a dinner at the Detroit Boat club given by Mrs. William Stratton of Detroit, who entertained a group of ceramists in the afternoon at her Pewabic pottery studio, each guest making for the bride a piece of pottery which Mrs. Stratton will glaze. Mrs. Jean Hebrard gave a supper at her home on Hillside Court, and other hostesses have been Mrs. Frederick C. O'Dell of Berkshire Rd., Mrs. Walter V. Marshall of Olivia Ave., Mrs. Lawrence Enersen of S. State St.; Mrs. Alfred H. Lovell of Geddes Ave,. Mrs. Arnold Price of Oswego St., Mrs. D. C. May of Geddes Ave. with Mrs. Albert Peck of Woodslde Rd.; Mrs. Stevens, and Mrs. Harry S. Hawkins of Highland Rd.