City Has Bumper Crop Of Ragweed, Cause Of Hay Fever 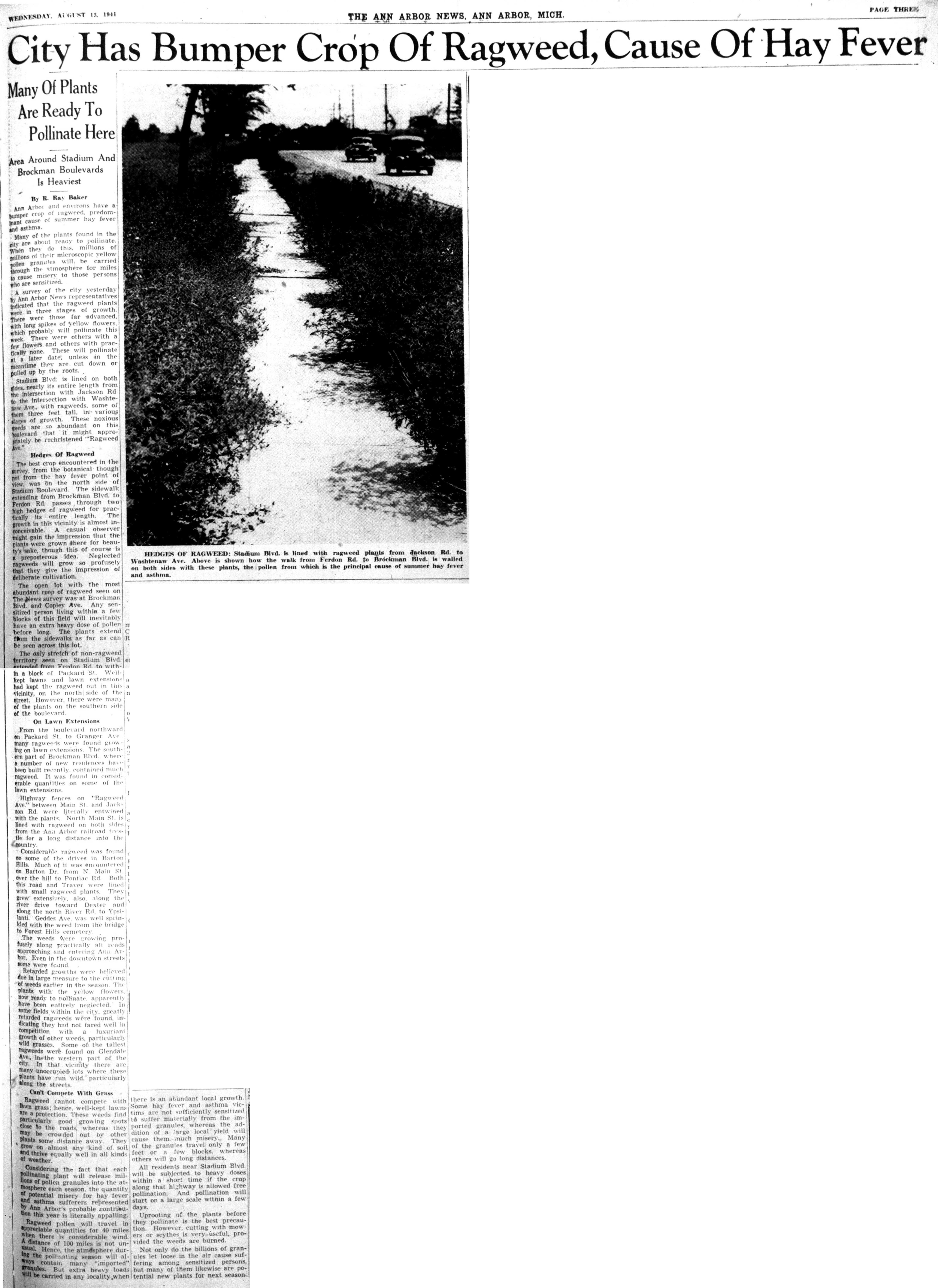 Many Of Plants Are Ready To Pollinate Here
Area Around Stadium And Brockman Boulevards
Is Heaviest
By R. Ray Baker Ann Arbor and environs have a bumper crop of ragweed. predom-1 Inant cause of summer hay fever and asthma.
Many of the plants found in the aty are about ready to pollinate. When they do this, millions of millions of their microscopic yellow pollen granules will be carried through the atmosphere for miles to cause misery to those persons who are sensitized.
A survey of the city yesterday kr Ann Arbor News representatives Indicated that the ragweed plants were in three stages of growth. There were those far advanced, with long spikes of yellow flowers, which probably will pollinate this week. There were others with a few flowers and others with practically none. These will pollinate at a later date, unless in the meantime they are cut down or pulled up by the roots.
Stadium Blvd. is lined on both sides, nearly its entire length from the intersection with Jackson Rd. to the intersection with Washte. Haw Ave., with ragweeds, some of them three feet tall, in various stages of growth. These noxious seeds are so abundant on this boulevard that it might appropriately be rechristened "Ragweed
Ave."
Hedges of Ragweed. The best crop encountered in the survey, from the botanical though not from the hay fever point of view. was on the north side of Stadium Boulevard. The sidewalk extending from Brockman Blvd. tol Ferdon Rd. passes through two high hedges of ragweed for practically its entire length. The growth in this vicinity is almost inconceivable. A casual observer might gain the impression that the plants were grown there for beauty's sake, though this of course is
preposterous idea. Neglected ragweeds will grow so profusely that they give the impression of deliberate cultivation.
The open lot with the most abundant crop of ragweed seen on The News survey was at Brockman Blvd. and Copley Ave. Any sensitized person living within a few blocks of this field will inevitably have an extra heavy dose of pollen m before long. The plants extend C flom the sidewalks as far as can R be seen across this lot.
The only stretch of non-ragweed territory seen on Stadium Blvd. lei extended from Ferdon Rd to withIn a block of Packard St. Wellkept lawns and lawn extensions a had kept the ragweed out in this a vicinity, on the north side of the n street. However, there were many of the plants on the southern side of the boulevard
On Lawn Extensions From the boulevard northward on Packard St. to Granger Ave many ragweed were found growing on lawn extensions. The southern part of Brockman Blvd., where: a number of new residences hair been built recently, contained much ragweed. It was found in considerable quantities on some of the lawn extensions.
Highway fences on "Ragweed Ave." between Main St. and Jackson Rd. were literally entwined with the plants. North Main Si.is lined with ragweed on both sides, from the Ann Arbor railroad trestle for a long distance into the country.
Considerable ragweed was found on some of the drives in Barton Hills. Much of it was encountered on Barton Dr. from N Main St. over the hill to Pontiac Rd. Both this road and Traver were lined with small ragweed plants. They grew extensively. also, along the river drive toward Dexter and along the north River Rd to Ypsilanti. Geddes Ave. was well sprinkled with the weed from the bridge to Forest Hills cemetery
The weeds were growing profusely along practically all roads approaching and entering Ann Arbor. Even in the downtown streets some were found..
Retarded growths were believed due in large measure to the cutting of weeds earlier in the season. The plants with the yellow flowers, now ready to pollinate, apparently have been entirely neglected. In some fields within the city, greatly retarded ragweeds were found, indicating they had not fared well in competition with a luxuriant growth of other weeds, particularly wild grasses. Some of the tallest ragweeds were found on Glendale Ave., in the western part of the city. In that vicinity there are many unoccupied lots where these plants have run wild. particularly along the streets.
Can't Compete with Grass Ragweed cannot compete with dawn grass; hence, well-kept lawns are a protection. These weeds find particularly good growing spots close to the roads, whereas they may be crowded out by other plants some distance away. They grow on almost any kind of soil and thrive equally well in all kinds
of weather.
Considering the fact that each pollinating plant will release milLIons of pollen granules into the at. mosphere each season, the quantity of potential misery for hay fever and asthma sufferers represented by Ann Arbor's probable contribution this year is literally appalling.
Ragweed rollen will travel in appreciable quantities for 40 miles When there is considerable wind. A distance of 100 miles is not unusual. Hence, the atmosphere during the pollinating season will al. ways contains, many "Imported" Granules. But extra heavy loads will be carried in any locality when there is an abundant local growth. ! Some hay fever and asthma victims are not sufficiently sensitized lo suffer materially from the imported granules, whereas the addition of a large local yield will cause them anuch misery. Many of the granules travel only a few feet or a few blocks, whereas others will go long distances.
All residents near Stadium Blvd. will be subjected to heavy doses within a short time it the crop along that highway is allowed free pollination. And pollination will start on a large scale within a few days.
Uprooting of the plants before they pollinate is the best precaution. However, cutting with mowers or scythes is very useful, provided the weeds are burned.
Not only do the billions of granules let loose in the air cause suffering among sensitized persons, but many of them likewise are potential new plants for next season.