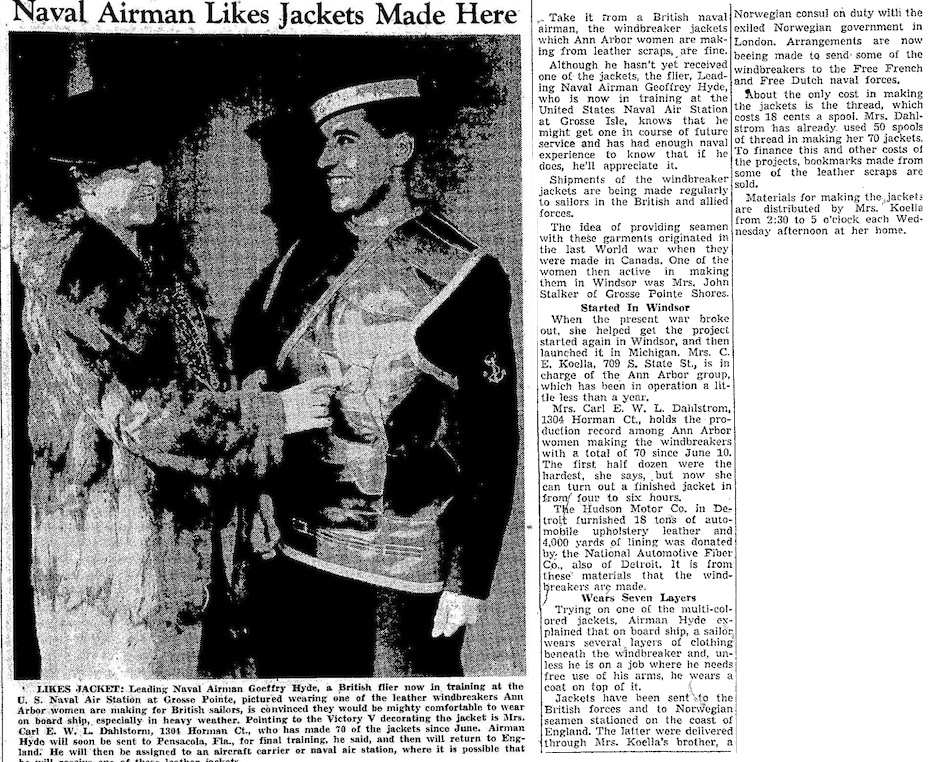 LIKES JACKET: Leading Naval Airman Goeffry Hyde, a British flier now in training at the U. S. Naval Air Station at Grosse Pointe, pictured wearing one of the leather windbreakers Ann Arbor women are making for British sailors, is convinced they would be mighty comfortable to wear on board ship, especially in heavy weather. Pointing to the Victory V decorating the jacket is Mrs. Carl E. W. L. Dahlstorm, 1301 Herman Ct., who has made 70 of the jackets since June. Airman Hyde will soon Ins sent to Pensacola, Fla., for final training, he said, and then will return to England. He will then be assigned to an aircraft carrier or naval air station, where it is possible that

Take it from a British naval airman, the windbreaker jackets which Ann Arbor women are making from leather scraps, are fine.

Although he hasn’t yet received one of the jackets, the flier, Leading Naval Airman Geoffrey Hyde, who is now in training at the United States Naval Air Station at Grosse Isle, knows that he might get one in course of future service and has had enough naval experience to know that if he does, he’ll appreciate it.

Shipments of the windbreaker jackets are being made regularly to sailors in the British and allied forces.

The idea of providing seamen with these garments originated In the last World war when they were made in Canada. One of the women then active in making them in Windsor was Mrs. John Stalker of Grosse Pointe Shores.

When the present war broke out, she helped get the project started again in Windsor, and then launched it in Michigan. Mrs. C. E. Koella, 709 S. State St., is in charge of the Ann Arbor group, which has been in operation a little less than a year.

Mrs. Carl E. W. L. Dahlslrom, 1304 Herman Ct., holds the production record among Ann Arbor women making the windbreakers with a total of 70 since June 10. The first half dozen were the hardest, she says, but now she can turn out a finished jacket in from four to six hours.

The Hudson Motor Co. in Detroit furnished I8 tons of automobile upholstery leather and 4,000 yards of lining was donated by the National Automotive Fiber Co., also of Detroit. It is from these materials that the wind-breakers are made.

Trying on one of the multi-colored jackets, Airman Hyde explained that on board ship, a sailor wears several layers of clothing beneath the windbreaker and, unless he is on a job where he needs free use of his arms, he wears a coat on top of it.

Jackets have been sent to the British forces and to Norwegian seamen stationed on the coast of England. The latter were delivered through Mrs. Koella’s brother, a Norwegian consul on duty with the exiled Norwegian government in London. Arrangements are now being made to send some of the windbreakers to the Free French and Free Dutch naval forces.

About the only cost in making the jackets is the thread, which costs 18 cents a spool. Mrs. Dahlslrom has already used 50 spools of thread in making her 70 jackets. To finance this and other costs of the projects, bookmarks made from some of the leather scraps are sold.

Materials for making the jacket are distributed by Mrs. Koella from 2:30 to 5 o’clock each Wednesday afternoon at her home.