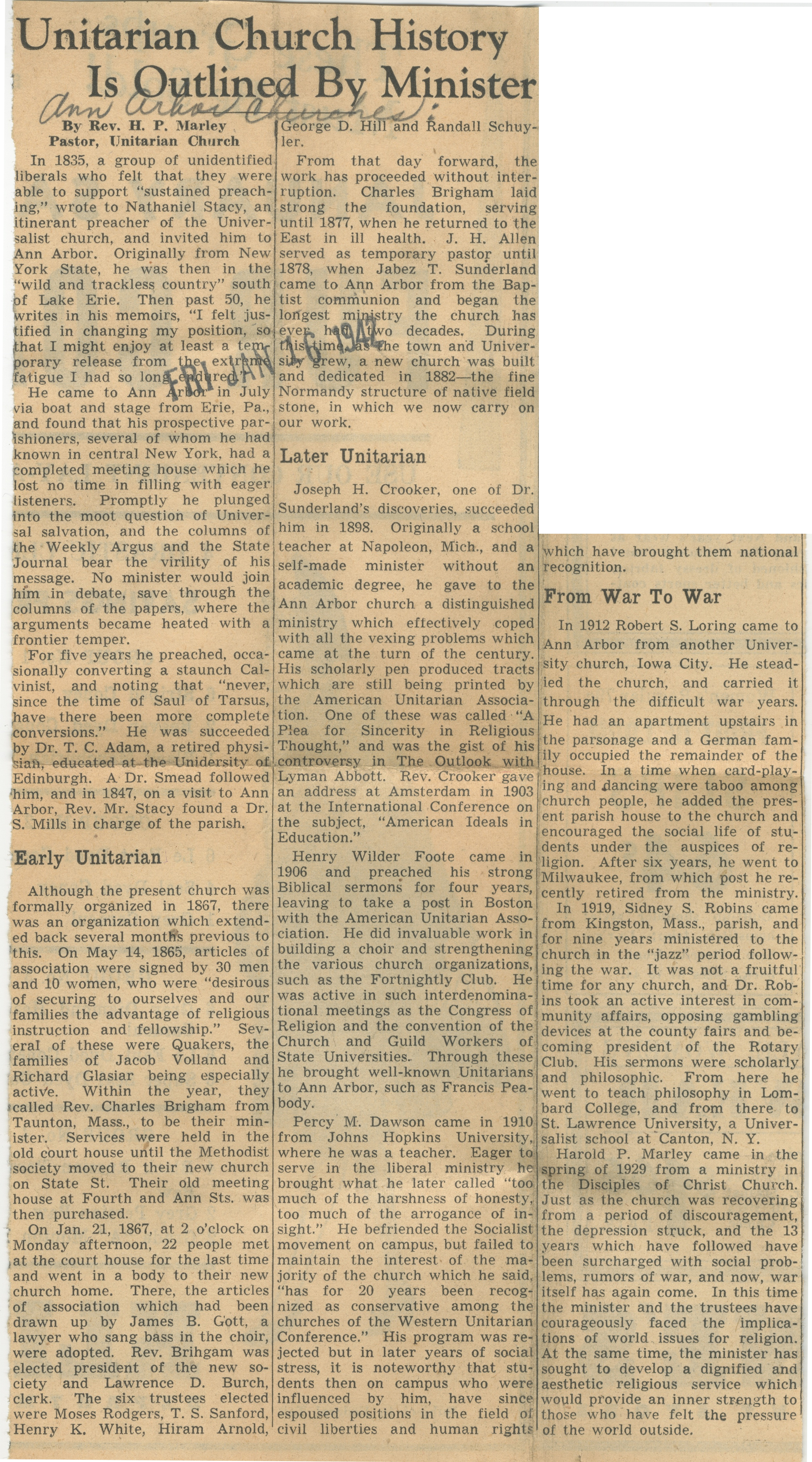 In 1835, a group of unidentified liberals who felt that they were able to support “sustained preaching,'’ wrote to Nathaniel Stacy, an itinerant preacher of the Universalist church, and invited him Ann Arbor. Originally from New York State, he was then in the “wild and trackless country” south of Lake Erie. Then past 50, he writes in his memoirs, “I felt justified in changing my position, so that I might enjoy at least a temporary release from the extreme fatigue I had so long endured.

He came to Ann Arbor in July via boat and stage from Erie, Pa., and found that his prospective parishioners, several of whom he had known in central New York, had a completed meeting house which he lost no time in filling with eager listeners. Promptly he plunged into the moot question of Universal salvation, and the columns of the Weekly Argus and the State Journal bear the virility of his message. No minister would join him in debate, save through columns of the papers, where the arguments became heated with a frontier temper.

For five years he preached, occasionally converting a staunch Calvinist, and noting that "never, since the time of Saul of Tarsus, have there been more complete conversions." He was succeeded by Dr. T. C. Adam, a retired physician, educated at the University of Edinburgh.  A Dr. Smead followed him, and in 1847, on a visit to Ann Arbor, Rev. Mr. Stacy found a Dr. S. Mills in charge of the parish.

Although the present church was formally organized in 1867, there was an organization which extended back several months previous to this.  On May 14, 1865, articles of association were signed by 30 men and 10 women, who were "desirous of securing to ourselves and our families the advantage of religious instruction and fellowship."  Several of these were Quakers, the families of Jacob Volland and Richard Glasiar being especially active.  Within the year, they called Rev. Charles Brigham from Taunton, Mass., to be their minister.  Services were held in the old court house until the Methodist society moved to their new church on State St.  Their old meeting house at Fourth and Ann Sts. was then purchased.

On Jan 21. 1867, at 2 o'clock on Monday afternoon, 22 people met at the court house for the last time and went in a body to their new church home. There, the articles of association which had been drawn up by James B. Gott, a lawyer who sang bass in the choir, were adopted.  Rev. Brigham was elected president of the new society and Lawrence D. Burch, clerk.  The six trustees elected were Moses Rodgers, T. S. Sanford, Henry K. White, Hiram Arnold, George D. Hill and Randall Schuyler.

From that day forward, the work has proceeded without interruption. Charles Brigham laid strong the foundation, serving until 1877, when he returned to the East in ill health. J. H. Allen served as temporary pastor until 1878, when Jabez T. Sunderland came to Ann Arbor from the Baptist communion and began the longest ministry the church has ever had in two decades. During this time, as the town and University grew, a new church was built and dedicated in 1882—the fine Normandy structure of native field which we now carry on our work.

Joseph H. Crooker, one of Dr Sunderland's discoveries, succeeded him in 1898. Originally a school teacher at Napoleon, Mich., and a self-made minister without academic degree, he gave to the Ann Arbor church a distinguished ministry which effectively coped with all the vexing problems which came at the turn of the century. His scholarly pen produced tracts which are still being printed by the American Unitarian Association. One of these was called “A Plea for Sincerity in Religious Thought,” and was the gist of his controversy in The Outlook with Lyman Abbott.  Rev. Crooker gave an address at Amsterdam in 1903 at the International Converence on the subject, "American Ideals in Education."

Henry Wilder Foote came in 1906 and preached his strong Biblical sermons for four years, leaving to take a post in Boston with the American Unitarian Association. He did invaluable work in building a choir and strengthening the various church organizations, such as the Fortnightly Club. He was active in such interdenominational meetings as the Congress of Religion and the convention of the Church and Guild Workers of State Universities. Through these he brought well-known Unitarians to Ann Arbor, such as Francis Peabody.

Percy M. Dawson came in 1910 from Johns Hopkins University, where he was a teacher. Eager to serve in the liberal ministry he brought what he later called “too much of the harshness of honesty, too much of the arrogance of insight." He befriended the Socialist movement on campus, but failed to maintain the interest of the majority of the church which he said, "has for 20 years been recognized as conservative among the churches of the Western Unitarian Conference.” His program was rejected but in later years of social stress, it is noteworthy that students then on campus who were influenced by him, have since espoused positions in the field of civil liberties and human rights which have brought them national recognition.

From War To War

In 1912 Robert S. Loring came to Ann Arbor from another University church, Iowa City. He steadied the church, and carried it through the difficult war years. He had an apartment upstairs in the parsonage and a German family occupied the remainder of the house. In a time when card-playing and dancing were taboo among church people, he added the present parish house to the church and encouraged the social life of students under the auspices of religion. After six years, he went to Milwaukee, from which post he recently retired from the ministry.

In 1919, Sidney S. Robins came from Kingston, Mass., parish, and for nine years ministered to the church in the “jazz” period following the war. It was not a fruitful time for any church, and Dr. Robins took an active interest in community affairs, opposing gambling devices at the county fairs and becoming president of the Rotary Club. His sermons were scholarly and philosophic. From here he went to teach philosophy in Lombard College, and from there to St. Lawrence University, a Universalist school at Canton, N. Y.

Harold P. Marley came in the spring of 1929 from a ministry in the Disciples of Christ Church. Just as the church was recovering from a period of discouragement, the depression struck, and the 13 years which have followed have been surcharged with social problems, rumors of war, and now, war itself has again come. In this time the minister and the trustees have courageously faced the implications of world issues for religion. At the same time, the minister has sought to develop a dignified and aesthetic religious service which would provide an inner strength to those who have felt the pressure of the world outside.