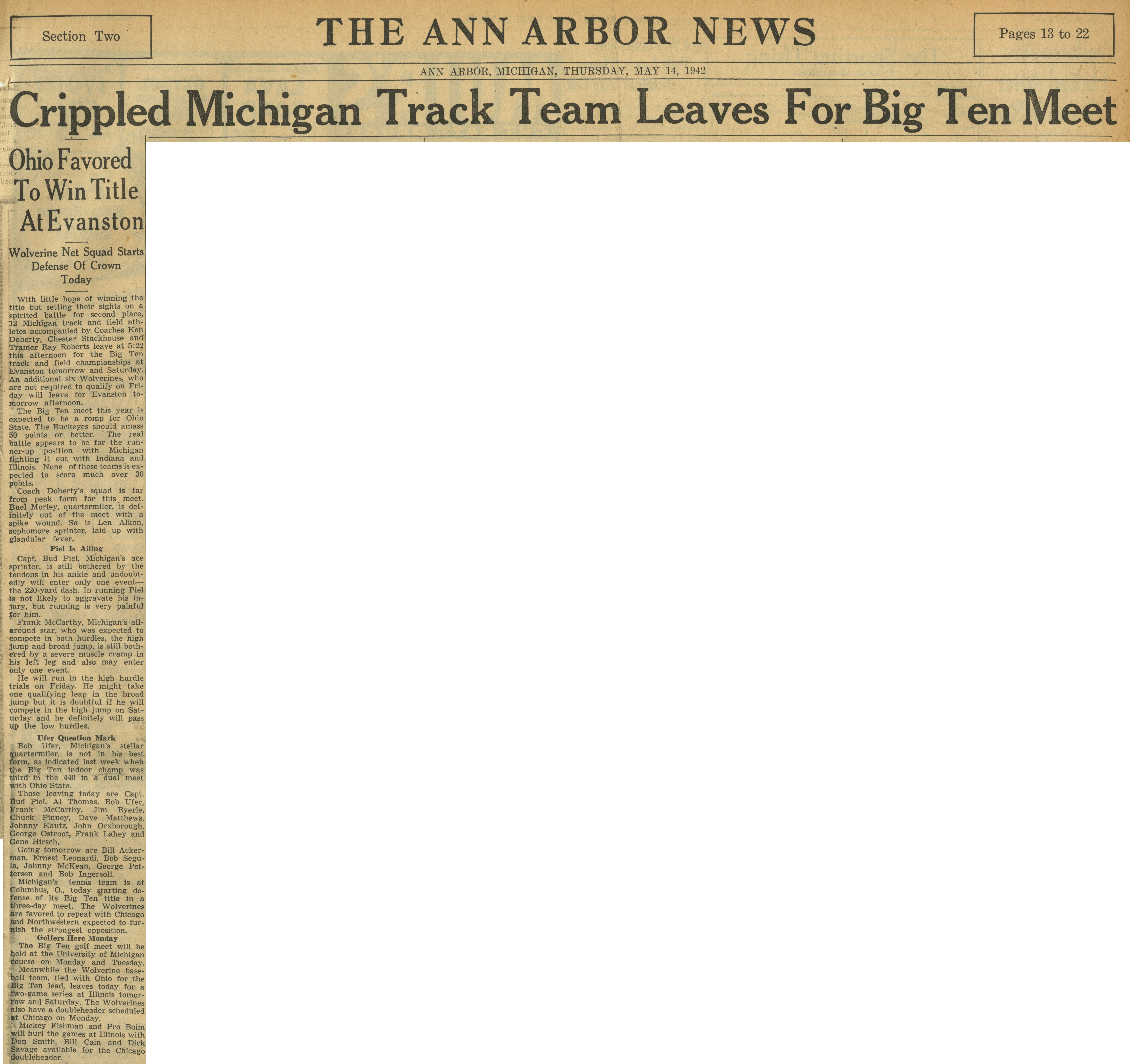 With little hope of winning the title but setting their sights on a spirited battle for second place, 12 Michigan track and field athletes accompanied by Coaches Ken Doherty, Chester Stackhouse and Trainer Ray Roberts leave at 5:22 this afternoon for the Big Ten track and field championships at Evanston tomorrow and Saturday. An additional six Wolverines, who are not required to qualify on Friday will leave for Evanston tomorrow afternoon.

The Big Ten meet this year is expected to be a romp for Ohio State. The Buckeyes should amass 50 points or better. The real battle appears to be for the runner-up position with Michigan fighting it out with Indiana and Illinois. None of these teams is expected to score much over 30 points.

Coach Doherty's squad is far from peak form for this meet. Buel Morley, quartermiler, is definitely out of the meet with a spike wound. So is Len Alkon, sophomore sprinter, laid up with glandular fever.

Capt. Bud Piel, Michigan’s ace sprinter, is still bothered by the tendons in his ankle and undoubtedly will enter only one event— the 220-yard dash. In running Piel is not likely to aggravate his injury, but running is very painful for him.

Frank McCarthy, Michigan's all-around star, who was expected to compete in both hurdles, the high jump and broad jump, is still bothered by a severe muscle cramp in his left leg and also may enter only one event.

He will run in the high hurdle trials on Friday. He might take one qualifying leap in the broad jump but it is doubtful if he will compete in the high jump on Saturday and he definitely will pass up the low hurdles.

Bob Ufer, Michigan’s stellar quartermiler, is not in his best form, as indicated last week when the Big Ten indoor champ was third in the 440 in a dual meet with Ohio State.

Michigan’s tennis team is at Columbus, O., today starting defense of its Big Ten title in a three-day meet. The Wolverines are favored to repeat with Chicago and Northwestern expected to furnish the strongest opposition.

The Big Ten golf meet will be held at the University of Michigan Course on Monday and Tuesday.

Meanwhile the Wolverine baseball team, tied with Ohio for the Big Ten lead, leaves today for a two-game series at Illinois tomorrow and Saturday. The Wolverines also have a doubleheader scheduled at Chicago on Monday.

Mickey Fishman and Pro Boim will hurl the games at Illinois with Don Smith, Bill Cain and Dick Savage available for the doubleheader.