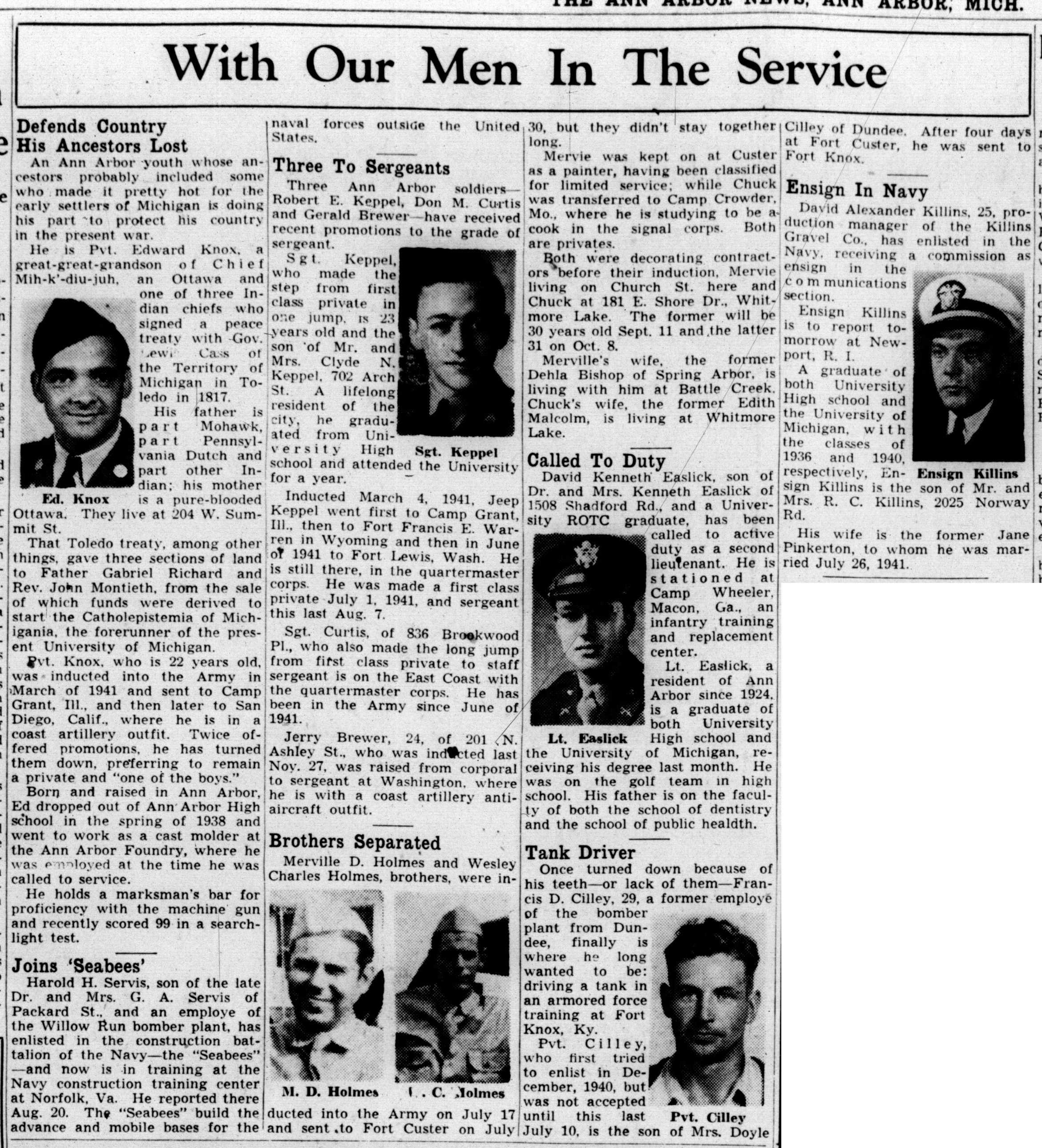 ﻿With Our Men In The Service

An Ann Arbor youth whose ancestors probably included some who made it pretty hot for the early settlers of Michigan is doing his part to protect his country in the present war.

He is Pvt. Edward Knox, a great-great-grandson of chief Mih-k'-diu-juh, and Ottawa and one of three Indian chiefs who signed a peace treaty with Gov. Lewis Cass of the Territory of Michigan in Toledo in 1817.

His father is part Mohawk, part Pennsylvania Dutch and part other Indian; his mother is a pure-blooded Ottawa. They live at 204 W. Summit St.

That Toledo treat, among other things, gave three sections of land to Father Gabriel Richard and Rev. John Montieth, from the sale of which funds were derived to start the Catholepistemia of Michigania, the forerunner of the present University of Michigan.

Pvt. Knox, who is 22 years old, was inducted into the Army in March of 1941 and sent to Camp Grant, Ill., and then later to San Diego, Calif., where he is in a coast artillery outfit. Twice offered promotions, he has turned them down, preferring to remain a private and "one of the boys."

Born and raised in Ann Arbor, Ed dropped out of Ann Arbor High school in the spring of 1938 and went to work as a cast molder at the Ann Arbor Foundry, where he was employed at the time he was called to service.

He holds a marksman's bar for proficiency with the machine gun and recently scored 99 in a searchlight test.

Harold H. Servis, son of the late Dr. and Mrs. G. A. Servis of Packard St., and an employe of the Willow Run bomber plant, has enlisted in the construction battalion of the Navy--the “Seabees"--and now is in training at the Navy construction training center at Norfolk, Va. He reported there Aug. 20. The "Seabees” build the advance and mobile bases for the naval forces outside the United States.

Sgt. Keppel, who made the step from first class private in one jump, is 23 years old and the son of Mr. and Mrs. Clyde N. Keppel, 702 Arch St. A lifelong resident of the city, he graduated from University High school and attended the University for a year.

Inducted March 4, 1941, Jeep Keppel went first to Camp Grant, Ill., then to Fort Francis E. Warren in Wyoming and then in June of 1941 to Fort Lewis, Wash. He is still there, in the quartermaster corps. He was made a first class private July 1, 1941, and sergeant this last Aug. 7.

Sgt. Curtis, of 836 Brookwood Pl., who also made the long jump from first class private to staff sergeant is on the East Coast with the quartermaster corps. He has been in the Army since June of 1941.

Jerry Brewer, 24, of 201 , N. Ashley St., who was inducted last Nov. 27, was raised from corporal to sergeant at Washington, where he is with a coast artillery anti-aircraft outfit.

Merville D. Holmes and Wesley Charles Holmes, brothers, were inducted into the Army on July 17 and sent to Fort Custer on July 30, but they didn't stay together long.

Mervie was kept on at Custer as a painter, having been classified for limited service; while Chuck was transferred to Camp Crowder, Mo., where he is studying to be a cook in the signal corps. Both are privates.

Both were decorating contractors before their induction. Mervie living on Church St. here and Chuck at 181 E. Shore Dr., Whitmore Lake. The former will be 30 years old Sept. 11 and the latter 31 on Oct. 8.

Merville's wife. the former Dehla Bishop of Spring Arbor, is living with him at Battle Creek. Chuck's wife, the former Edith Malcolm, is living at Whitmore Lake.

David Kenneth Easlick. son of Dr. and Mrs. Kenneth Easlick of 1508 Shadford Rd., and a University ROTC graduate, has been called to active duty as a second lieutenant. He is stationed at Camp Wheeler, Macon, Ga., an infantry training and replacement center.

Lt. Easlick, a resident of Ann Arbor since 1924, is a graduate of both University High school and of the University of Michigan, receiving his degree last month. He was on the golf team in high school. His father is on the faculty of both the school of dentistry and the school of public health.

Once turned down because of his teeth--or lack of them--Francis D. Cilley, 29, a former employe of the bomber plant from Dundee, finally is where he long wanted to be: driving a tank in an armored force training at Fort Knox, Ky.

Pvt. Cilley, who first tried to enlist in December, 1940, but was not accepted until this last July 10, is the son of Mrs. Doyle Cilley of Dundee. After four days at Fort Custer, he was sent to Fort Knox.

David Alexander Killins, 25, production manager of the Killins Gravel Co., has enlisted in the Navy, receiving a commission as ensign in the communications section.

Ensign Killins is to report tomorrow at Newport, R. I.

A graduate of both University High school and the University of Michigan, with the classes of 1936 and 1940, respectively, Ensign Killins is the son of Mr. and Mrs. R. C. Killins, 2025 Norway Rd.