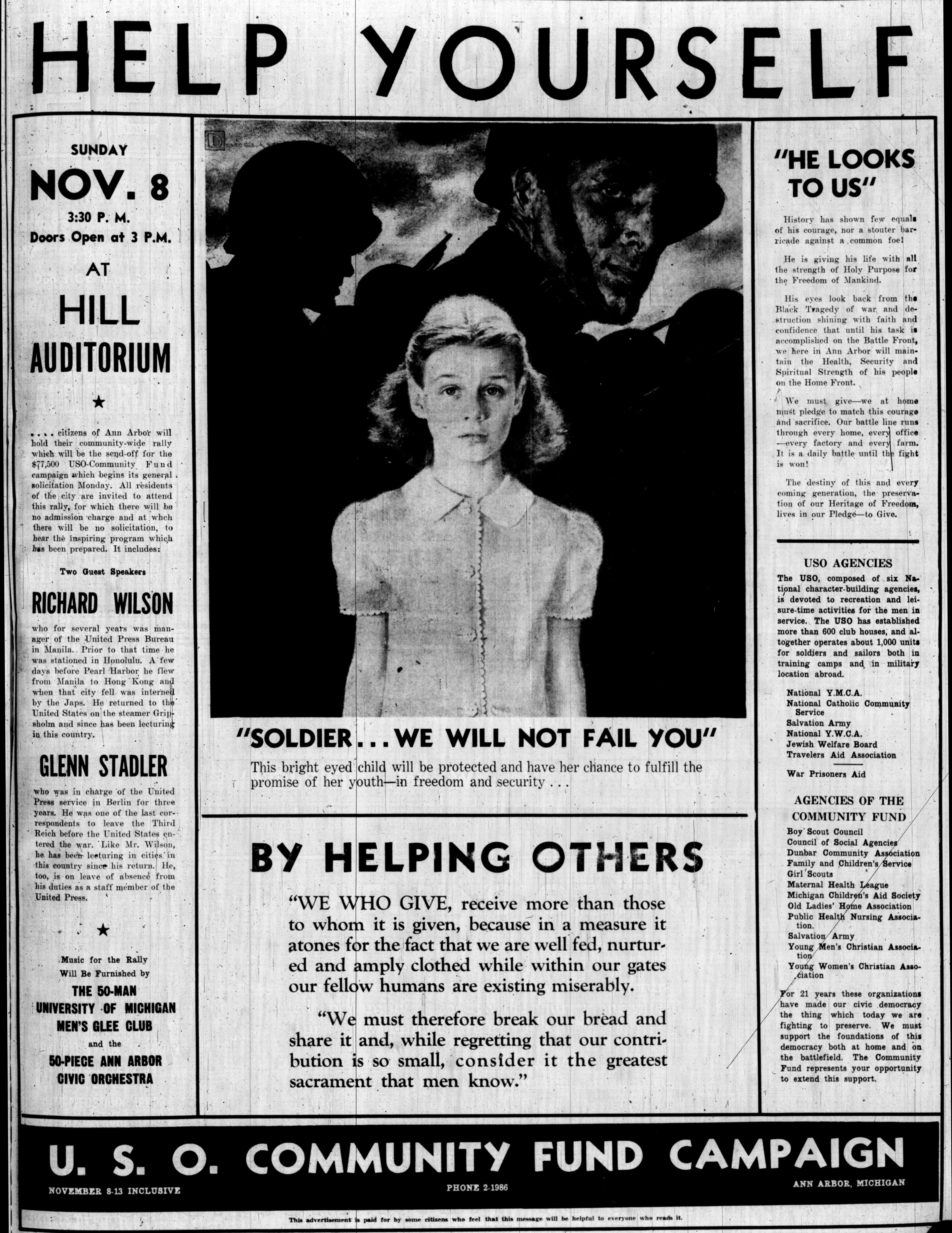 ...citizens of Ann Arbor will hold their community-wide rally which will be the send-off for the $77,500 USO-Community Fund campaign which begins its general solicitation Monday. All residents of the city are invited to attend this rally, for which there will be no admission charge and at which there will be no solicitation, to hear the inspiring program which has been prepared. It includes:

who for several years was manager of the United Press Bureau in Manila.. Prior to that time he was stationed in Honolulu. A few days before Pearl Harbor he flew from Manila to Hong Kong and when that city fell was interned by the Japs. He returned to the United States on the steamer Gripsholm and since has been lecturing in this country.

who was in charge of the United Press service in Berlin for three years. He was one of the last correspondents to leave the Third Reich before the United States entered the war. Like Mr. Wilson, he has been lecturing in cities in this country since his return. He, too, is on leave of absence from his duties as a staff member of the United Press.

Music for the Rally Will Be Furnished by

"SOLDIER...WE WILL NOT FAIL YOU"

This bright eyed child will be protected and have her chance to fulfill the promise of her youth--freedom and security...

“WE WHO GIVE, receive more than those to whom it is given, because in a measure it atones for the fact that we are well fed, nurtured and amply clothed while within our gates our fellow humans are existing miserably.

"We must therefore break our bread and share it and, while regretting that our contribution is so small, consider it the greatest sacrament that men know.”

History has shown few equals of his courage, nor a stouter barricade against a common foe!

He is giving his life with all the strength of Holy Purpose for the Freedom of Mankind.

His eyes look back from the Black Tragedy of war and destruction shining with faith annd confidence that until his task is accomplished on the Battle Front, we here in Ann Arbor will maintain the Health, Security and Spiritual Strength of his people on the Home Front.

We must give—we at home must pledge to match this courage and sacrifice. Our battle line runs through every home, every office--every factory and every farm. It is a daily battle until the fight is won!

The destiny of this and every coming generation, the preservation of our Heritage of Freedom, lives in our Pledge—to Give.

The USO, composed of six National character-building agencies, is devoted to recreation and leisure-time activities for the men in service. The USO has established more than 600 club houses, and altogether operates about 1,000 units for soldiers and sailors both in training camps and in military location abroad.

AGENCIES OF THE COMMUNITY FUND

For 21 years these organizations have made our civic democracy the thing which today we are fighting to preserve. We must support the foundations of this democracy both at home and on the battlefield. The Community Fund represents your opportunity to extend this support.

This advertisement is paid for by some citizens who feel that this message will be helpful to everyone who reads it.