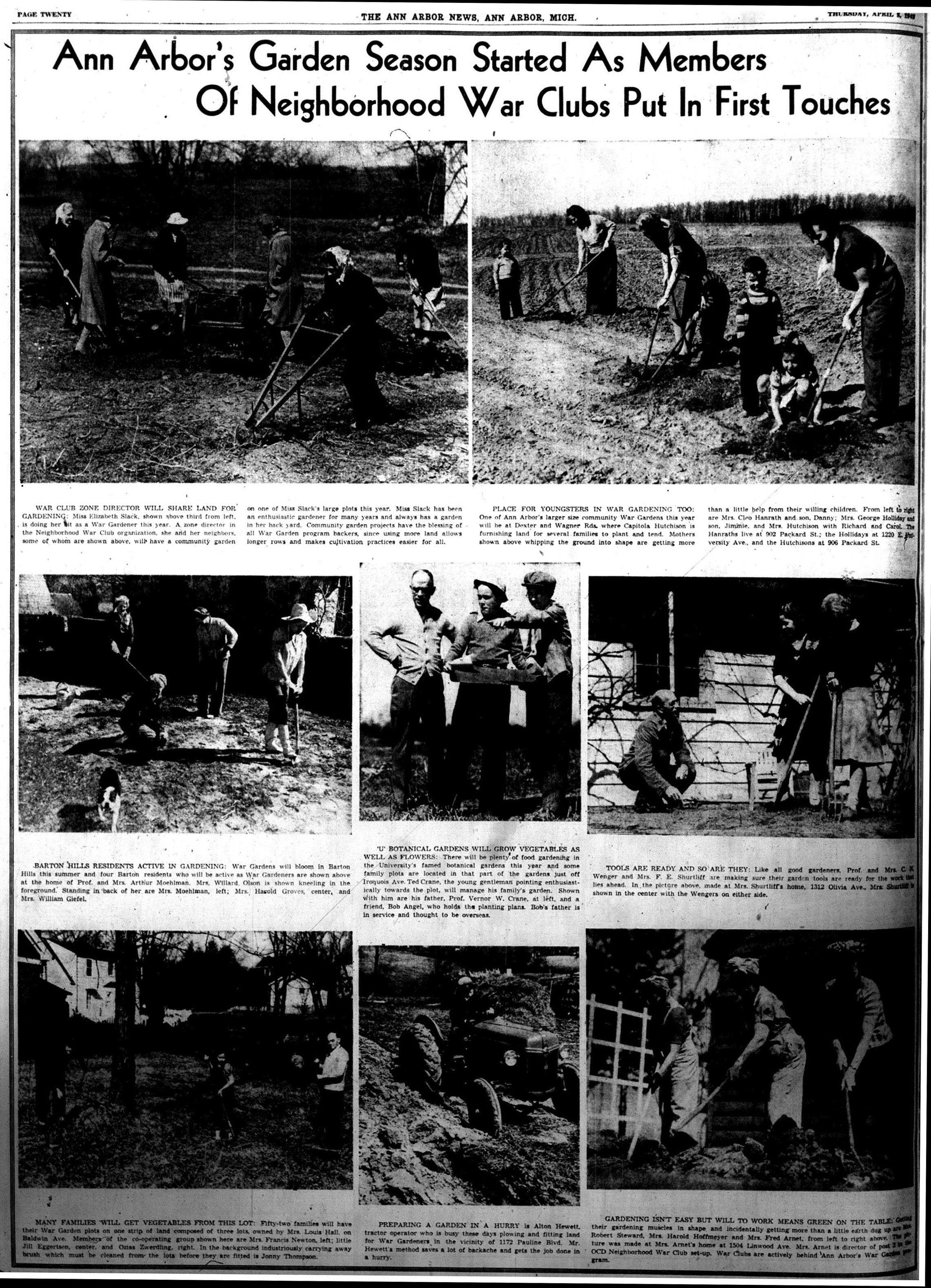 WAR CLUB ZONE DIRECTOR WILL SHARE LANS FOR GARDENING : Miss Elizabeth Slack, shown above third from left , is doing her bit as a War Gardener this year. A zone director in the Neighborhood War Club organization, she abd her neighbors, some of whom are shown above, will have a community garden on one of Miss Slack's large plots this year. Miss Slack has been an enthusiastic gardener for many years and always has a garden In her back yard. Community garden projects have the blessing of all War Garden program backers, since using more land allows longer rows and makes cultivation practices easier for all.

PLACE FOR YOUNGSTERS IN WAR GARDENING TOO:One of Ann Arbor's larger size community War Gardens this year will be at Dexter and Wagner Rds. where Capitola Hutchison is furnishing land for several families to plant and tend. Mothers shown above whipping the ground into shape are getting more than a little help from their willing children. From left to right are Mrs. Cleo Hanrath and son. Danny; Mrs. George Holliday and son. Jimmie, and Mrs. Hutchison with Richard and Carol. Hanraths live at 902 Packard St.; the Hollidays at 1220 E.University Ave., and the Hutchisons at 906 Packard St.

BARTON HlLLS RESIDENTS ACTIVE IN GARDENING: War Gardens will bloom in Barton Hills this summer and four Barton residents who will be active as War Gardeners are shown above at the home of Prof, and Mrs. Arthur Moehlman. Mrs. Willard Olson is shown kneeling in the foreground.' Standing in back of her are Mrs. Moehlman, left; Mrs., Hacold Groves, center, and Mrs. William Giefel.

"U" BOTANICAL GARDENS WILL GROW VEGETABLES AS WELL AS FLOWERS: There will be plenty of food gardening in the University's famed botanical gardens this year and some family plots are located in that part of the gardens just off Iroquois Ave. Ted Crane, the young gentleman pointing enthusiastically towards the plot, will manage his family's garden. Shown with him are his father, Prof. Vernor W. Crane, at left, and a friend, Bob Angel, who holds the planting plans. Bob's father is in service and thought to be overseas.

TOOLS ARE READY AND SO ARE THEY: Like all good gardeners. Prof. and Mrs. C. K. Wenger and Mrs. F. E. Shurtliff are making sure their garden tools are ready for the work that lies ahead. In the picture above, made at Mrs. Shurtliff's home, 1312 Olivia Ave, Mrs. Shurtliff is shown in the center with the Wengers on either side.

MANY FAMILIES WILL GET VEGETABLES FROM THIS LOT: Fifty-two families will have their War Garden plots on one strip of land composed of three lots owned by Mrs. Louis Hall on Baldwin Ave. Members of the cooperating group shown here are Mrs. Francis Newton, left; little Jill Eggertsen, center, and Oztas Zwerdlin, right. In the background Industriously carrying away brush which must be cleaned from the Iots before they are fitted is Jonny Thompson.

PREPARING A GARDEN IN A HURRY is Alton Hewett. tractor operator who is busy these days plowing and fitting land for War Gardeners in the vicinity of 1172 Pauline Blvd. Mr. Hewett's method saves a lot of backache and gets the Job done in a hurry.

GARDENING ISN'T EASY BUT WILL TO WORK MEANS GREEN ON THE TABLE: Getting their gardening muscles in shape and incidentally getting more than a little earth dug up are Mrs. Robert Steward. Mrs. Harold Hoffmeyer and Mrs. Fred Arnet, from left to right above. The Picture was made at Mrs. Arnet's home at 1504 Linwood Ave. Mrs. Arnet is director of post 2 in the OCD Neighborhood War Club set-up. War Clubs are actively behind 'Ann Arbor's War Garden program.