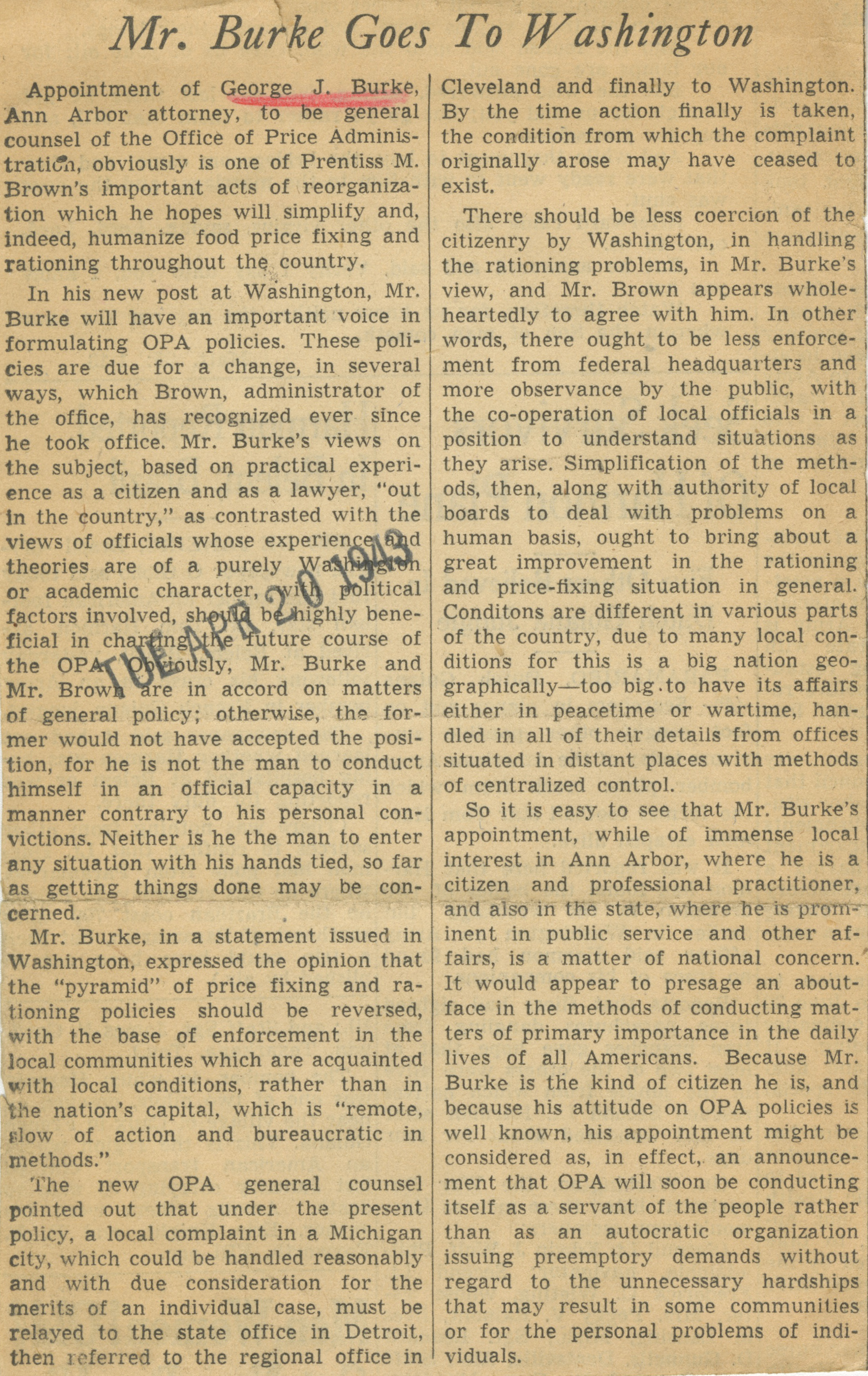 Appointment of George J. Burke, Ann Arbor attorney, to be general counsel of the Office of Price Administration, obviously is one of Prentiss M. Brown's important acts of reorganization which he hopes will simplify and, indeed, humanize food price fixing and rationing throughout the country.
In his new post at Washington, Mr. Burke will have an important voice in formulating OPA policies. These policies are due for a change, in several ways, which Brown, administrator of the office, has recognized ever since he took office. Mr. Burke's views on the subject, based on practical experience as a citizen and as a lawyer, "out in the country,” as contrasted with the views of officials whose experience and theories are of a purely Washington or academic character, it political factors involved, should be highly beneficial in charting the future course of the OPAT Obviously, Mr. Burke and Mr. Brown are in accord on matters of general policy; otherwise, the former would not have accepted the position, for he is not the man to conduct himself in an official capacity in a manner contrary to his personal convictions. Neither is he the man to enter any situation with his hands tied, so far as getting things done may be concerned.
Mr. Burke, in a statement issued in Washington, expressed the opinion that the "pyramid" of price fixing and rationing policies should be reversed, with the base of enforcement in the local communities which are acquainted with local conditions, rather than in the nation's capital, which is "remote, slow of action and bureaucratic in methods."
The new OPA general counsel pointed out that under the present policy, a local complaint in a Michigan city, which could be handled reasonably and with due consideration for the merits of an individual case, must be relayed to the state office in Detroit, then referred to the regional office in Cleveland and finally to Washington. By the time action finally is taken, the condition from which the complaint originally arose may have ceased to exist.
There should be less coercion of the citizenry by Washington, in handling the rationing problems, in Mr. Burke's view, and Mr. Brown appears wholeheartedly to agree with him. In other words, there ought to be less enforcement from federal headquarters and more observance by the public, with the co-operation of local officials in a position to understand situations as they arise. Simplification of the methods, then, along with authority of local boards to deal with problems on a human basis, ought to bring about a great improvement in the rationing and price-fixing situation in general. Conditions are different in various parts of the country, due to many local conditions for this is a big nation geographically—too big to have its affairs either in peacetime or wartime, handled in all of their details from offices situated in distant places with methods of centralized control.
So it is easy to see that Mr. Burke's appointment, while of immense local interest in Ann Arbor, where he is a citizen and professional practitioner, and also in the state, where he is prominent in public service and other affairs, is a matter of national concern. It would appear to presage an about face in the methods of conducting matters of primary importance in the daily lives of all Americans. Because Mr. Burke is the kind of citizen he is, and because his attitude on OPA policies is well known, his appointment might be considered as, in effect, an announcement that OPA will soon be conducting itself as a servant of the people rather than as an autocratic organization issuing peremptory demands without regard to the unnecessary hardships that may result in some communities or for the personal problems of individuals.