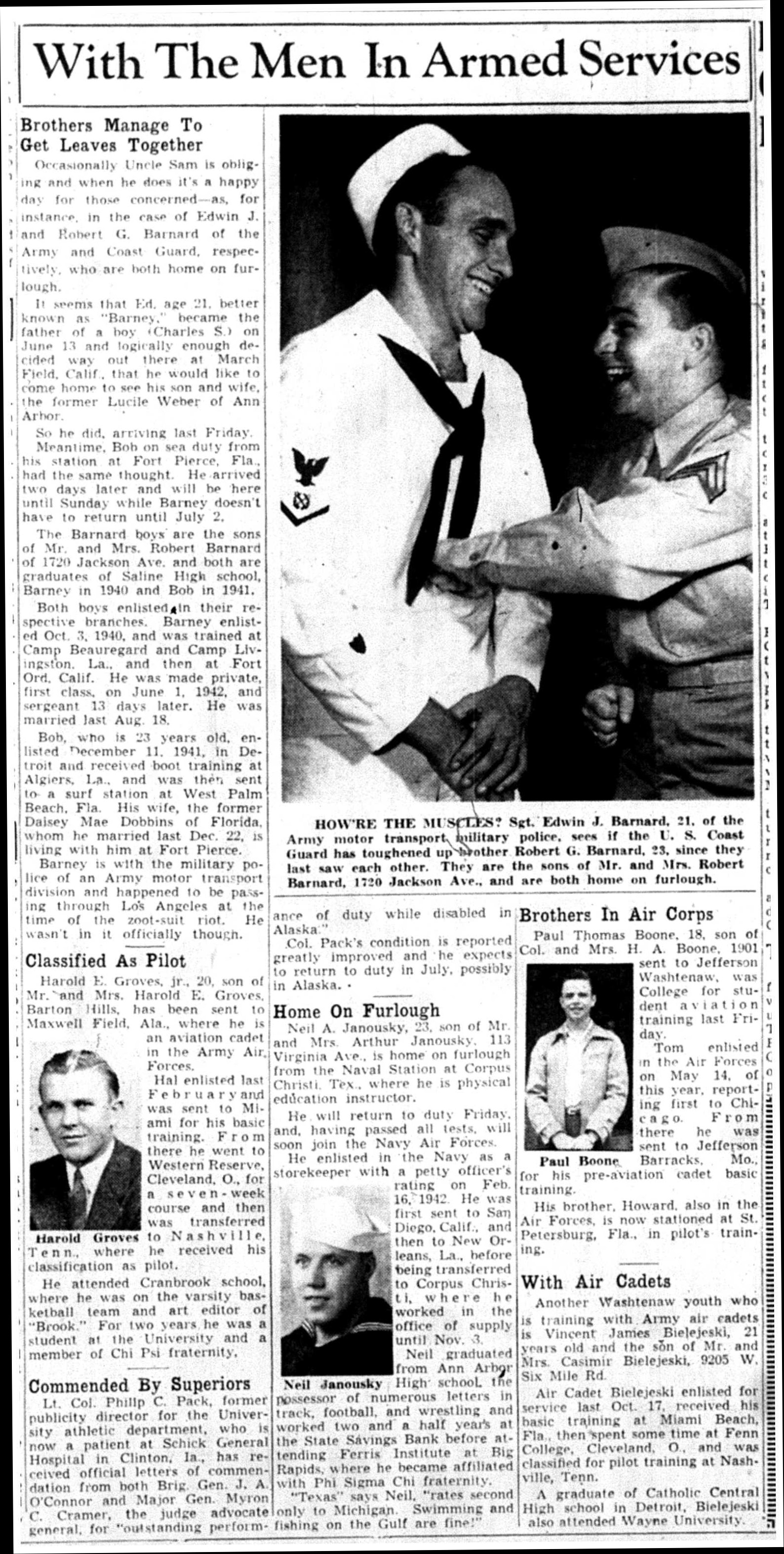 ﻿With The Men In Armed Services

HOW’RE THE MUSCLES? Sgt. Edwin J. Barnard, 21, of the Army motor transport military police, sees if the U. S. Coast Guard has toughened up Robert G. Barnard, 23, since they last saw each other. They are the sons of Mr. and Mrs. Robert Barnard, 1720 Jackson Ave., and are both home on furlough.

Brothers Manage To Get Leaves Together

Occasionally Uncle Sam is obliging and when he does it's a happy day for those concerned--as, for instance, in the case of Edwin J. and Robert G. Barnard of the Army and Coast Guard, respectively, who are both home on furlough.

It seems that Ed, age 21, better known as "Barney," became the father of a boy (Charles S.) on June 13 and logically enough decided way out there at March Field, Calif., that he would like to come home to see his son and wife, the former Lucile Weber of Ann Arbor.

So he did, arriving last Friday.

Meantime, Bob on sea duty from his station at Fort Pierce, Fla., had the same thought. He arrived two days later and will he here until Sunday while Barney doesn't have to return until July 2.

The Barnard boys are the sons of Mr and Mrs. Robert Barnard of 1720 Jackson Ave. and both are graduates of Saline High school, Barney in 1940 and Bob in 1941.

Both boys enlisted in their respective branches. Barney enlisted Oct. 3, 1940, and was trained at Camp Beauregard and Camp Livingston, La., and then at Fort Ord, Calif. He was made private, first class, on June 1, 1942, and sergeant 13 days later. He was married last Aug. 18.

Bob, who is 23 years old, enlisted December 11, 1941 in Detroit and received boot training at Algiers, La., and was then sent to a surf station at West Palm Beach, Fla. His wife, the former Daisey Mae Dobbins of Florida, whom he married last Dec. 22, is living with him at Fort Pierce.

Barney is with the military police of an Army motor transport division and happened to he passing through Los Angeles at the time of the zoot-suit riot. He wasn't in it officially though.

Hal enlisted last February and was sent to Miami for his basic training. From there he went to Western Reserve, Cleveland, O., for a seven-week course and then was transferred to Nashville, Tenn., where he received his classification as pilot.

He attended Cranbrook school, where he was on the varsity basketball team and art editor of "Brook.” For two years he was a student at the University and a member of Chi Psi fraternity.

Lt. Col. Philip C. Pack, former publicity director for the University athletic department, who is now a patient at Schick General Hospital in Clinton, Ia., has received official letter of commendation from both Brig. Gen. J. A. O’Connor and Major Gen. Myron C. Cramer, the judge advocate general, for "outstanding performance of duty while disabled in Alaska."

Col. Pack's condition is reported greatly improved and he expects to return to duty in July, possibly in Alaska.

Neil A. Janousky, 23, son of Mr. and Mrs. Arthur Janousky, 113 Virginia Ave., is home on furlough from the Naval Station at Corpus Christi, Tex., where he is physical education instructor.

He will return to duty Friday, and, having passed all tests, will soon join the Navy Air Forces.

He enlisted in the Navy as a storekeeper with a petty officer’s rating on Feb. 16, 1942. He was first sent to San Diego. Calif., and then to New Orleans, La., before being transferred to Corpus Christi, where he worked in the office of supply until Nov. 3.

Neil graduated from Ann Arbor High school the possessor of numerous letters in track, football, and wrestling and worked two and a half years at the State Savings Bank before attending Ferris Institute at Big Rapids, where he became affiliated with Phi Sigma Chi fraternity.

"Texas" says Neil, "rates second only to Michigan. Swimming and fishing on the Gulf are fine!"

Tom enlisted in the Air Forces on May 14, of this year, reporting first to Chicago. From there he was sent to Jefferson Barracks, Mo., for his pre-aviation cadet basic training.

His brother, Howard, also in the Air Forces, is now stationed at St. Petersburg, Fla., in pilots training.

Another Washtenaw youth who is training with Army air cadets is Vincent James Bielejeski, 21 years old and the son of Mr. and Mrs Casimir Bielejeski, 9205 W. Six Mile Rd.