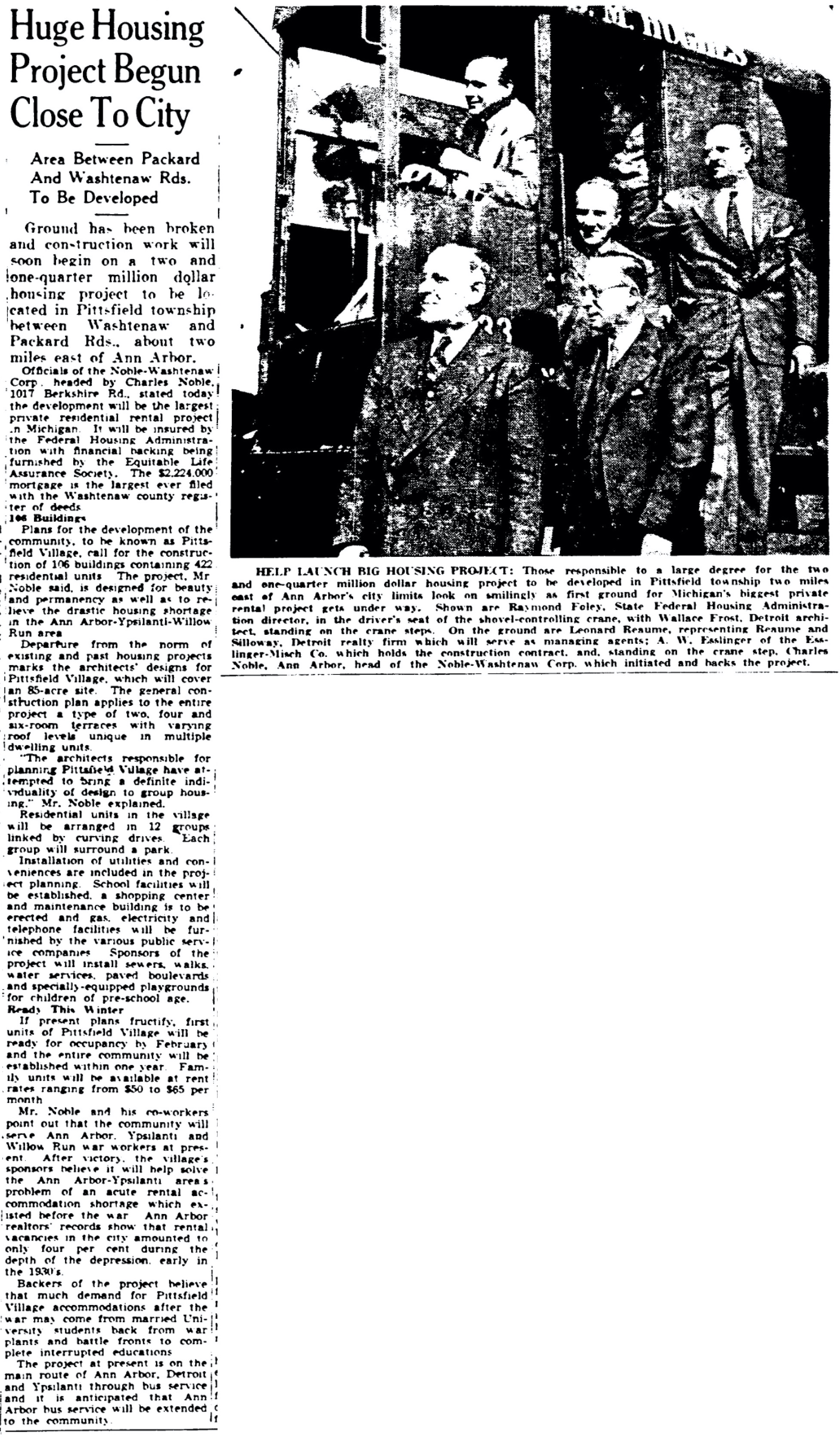 Area Between Packard And Washtenaw Rds. To Be Developed

Ground has been broken and construction work will soon begin on a two and one-quarter million dollar housing project to be located in Pittsfield township between Washtenaw and Packard Rds., about two miles east of Ann Arbor.

Officials of the Noble-Washtenaw Corp. headed by Charles Noble, 1017 Berkshire Rd., stated today the development mill be the largest private residential rental project in Michigan. It will be insured by the Federal Housing Administration with financial backing being furnished by the Equitable Life Assurance Society. The $2,224,000 mortgage is the largest ever filed with the Washtenaw county register of deeds.

Plans for the development of the community, to be known as Pittsfield Village, call for the construction of 106 buildings containing 422 residential units. The project, Mr. Noble said, is designed for beauty and permanency as well as to relieve the drastic housing shortage in the Ann Arbor-Ypsilantl-Willow Run area.

Departure from the norm of existing and past housing projects marks the architects' designs for Pittsfield Village, which will cover an 85-acre site. The general construction plan applies to the entire project a type of two, four and six-room terraces with varying roof levels unique in multiple dwelling units.

"The architects responsible for planning Pittsfield Village have attempted to bring a definite individuality of design to group housing," Mr. Noble explained.

Residential units in the village will be arranged in 12 groups linked by curving drives. Each group will surround a park.

Installation of utilities and conveniences are included in the project planning. School facilities will be established, a shopping center and maintenance building is to be erected and gas, electricity and telephone facilities will be furnished by the various public service companies. Sponsors of the project will install sewers, walks, water services, paved boulevards and specially-equipped playgrounds for children of pre-school age.

If present plans fructify, first units of Pittsfield Village will be ready for occupancy by February and the entire community will be established within one year. Family units will be available at rent rates ranging from $50 to $65 per month.

Mr. Noble and his co-workers point out that the community will serve Ann Arbor, Ypsilanti and Willow Run war workers at present. After victory, the village's sponsors believe it will help solve the Ann Arbor-Ypsilanti area's problem of an acute rental accommodation shortage which existed before the war.  Ann Arbor realtors records show that rental vacancies in the city amounted to only four per cent during the depth of the depression, early in the 1930's.

Backers of the project believe that much demand for Pittsfield Village accommodations after the war may come from married University students back from war plants and battle fronts to complete interrupted educations.

The project at present is on the main route of Ann Arbor, Detroit and Ypsilanti through bus service and it is anticipated that Ann Arbor bus service will be extended to the community.

HELP LAUNCH BIG HOUSING PROJECT: Those responsible to a lrge degree for the two and one-quarter million dollar housing project to be developed in Pittsfield township two miles east of Ann Arbor’s city limits look on smilinglv as first ground for Michigan's biggest private rental project gets under way. Shown are Ravmond Foley, State Federal Housing Administration director, in the driver's seat of the shovel-controlling crane, with Wallace Frost, Detroit architect, standing on the crane steps. On the ground are Leonard Reaume, representing Reaume and Silloway, Detroit realty firm which mil! serve as managing agents; A. W. Esslinger of the Esslinger-Misch Co. which holds the construction contract, and standing on the crane step. Charles Noble, Ann Arbor, head of the Noble-Washtenaw Corp. which initiated and barks the project.