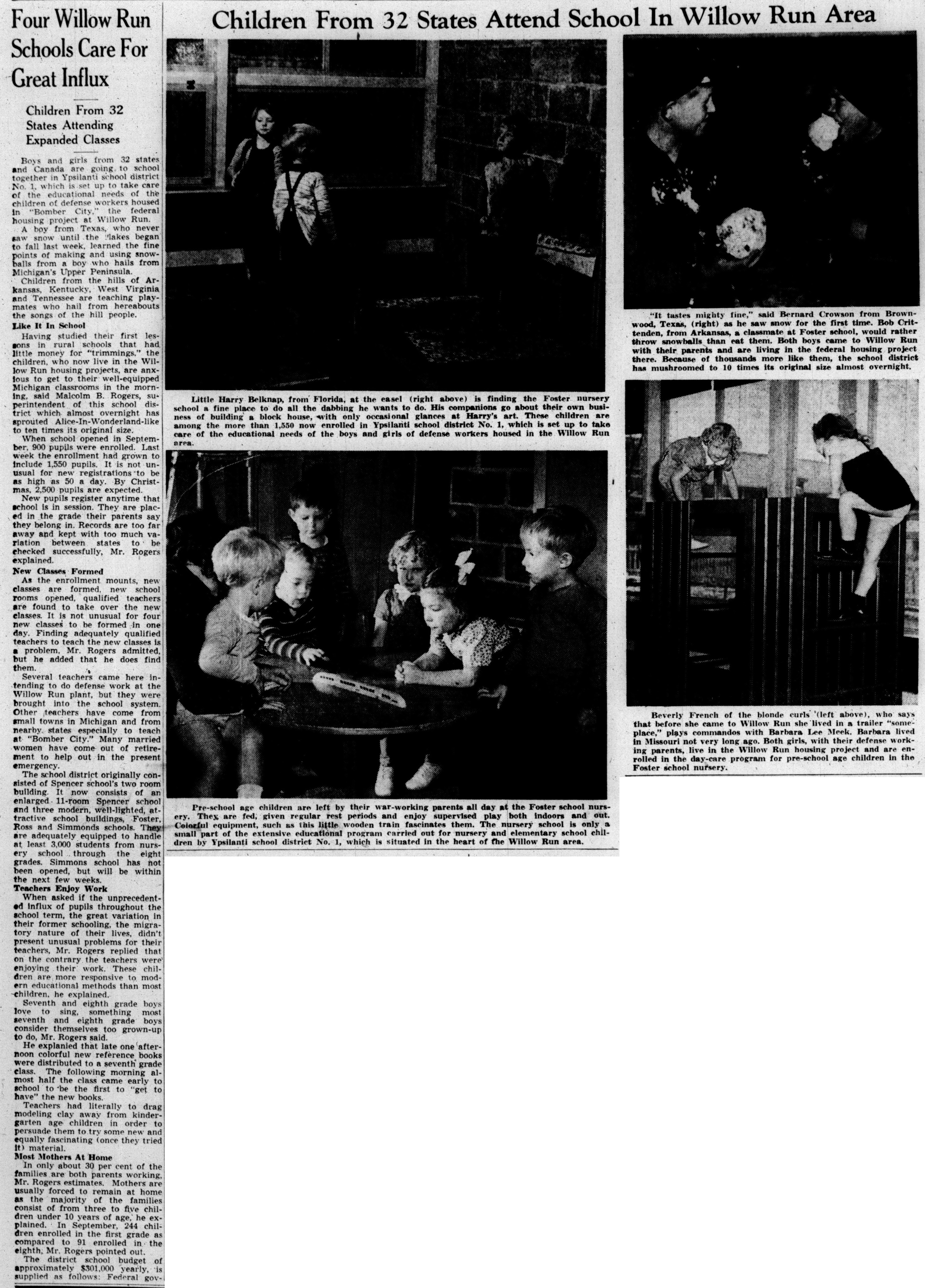 Boys and Girls from 32 slates and Canada are going to school together in Ypsilanti school district No 1, which is set up to take care of the educational needs of the children of defense workers housed In "Bomber City," the federal housing project at Willow Run.

A boy from Texas, who never saw snow until the flakes began to fall last week, learned the fine points of making and using snowballs from a boy who hails from Michigan's Upper Peninsula.

Children from the hills of Arkansas, Kentucky, West Virginia and Tennessee are teaching playmates who hail from hereabouts the songs of the hill people.

Having studied their first lessons in rural schools that had little money for "trimmings," the children, who now live in the Willow Run housing projects, are anxious to get to their well-equipped Michigan classrooms in the morning, said Malcolm B. Rogers, superintendent of this school district which almost overnight has sprouted Alice-In-Wonderland-like to ten times its original size.

When school opened in September, 900 pupils were enrolled. Last week the enrollment had grown to Include 1,550 pupils. It is not unusual for new registrations to be as high as 50 a day. By Christmas, 2,500 pupils are expected.

New pupils register anytime that school Is in session. They are placed in the grade their parents say they belong in. Records are too far away and kept with too much variation between states to be checked successfully, Mr. Rogers explained.

Several teachers came here intending to do defense work at the Willow Run plant, but they were brought into the school system. Other teachers have come from small towns in Michigan and from nearby states especially to teach at “Bomber City." Many married women have come out of retirement to help out in the present emergency.

The school district originally consisted of Spencer school's two room building. It now consists of an enlarged 11-room Spencer school and three modern, well-lighted, attractive school buildings, Foster, Ross and Simmonds schools. They are adequately equipped to handle at least 3,000 students from nursery school through the eight grades. Simmons school has not been opened, but will be within the next few weeks.

When asked if the unprecedented influx of pupils throughout the school term, the great variation in their former schooling, the migratory nature of their lives, didn’t present unusual problems for their teachers, Mr. Rogers replied that on the contrary the teachers were enjoying their work. These children are more responsive to modern educational methods than most children, he explained.

He explained that late one afternoon colorful new reference books were distributed to a seventh grade class. The following morning almost half the class came early to school to be the first to “get to have" the new books.

Teachers had literally to drag modeling clay away from kindergarten age children in order to persuade them to try some new and equally fascinating (once they tried it) material.

Most Mothers At Home

The district school budget of approximately $301,000 yearly, is supplied as follows: Federal gov-

Little Harry Belknap, from Florida, at the easel (right above) is finding the Foster nursery school a fine place to do all the dabbing he wants to do. His companions go about their own business of building a block house, with only occasional glances at Harry’s art. These children are among the more than 1,550 now enrolled in Ypsilanti school district No. 1, which is set up to take rare of the educational needs of the boys and girls of defense workers housed in the Willow Run area.

Pre-school age children are left by their war-working parents all day at the Foster school nursery. They are fed, given regular rest periods and enjoy supervised play both Indoors and out. Colorful equipment, such as this little wooden train fascinates them. The nursery school is only a small part of the extensive educational program carried out for nursery and elementary school children by Ypsilanti school district No. 1, which is situated in the heart of the Willow Run area.

“It tastes mighty fine," said Bernard Crowson from Brownwood, Texas, (right) as he saw snow for the first time. Bob Crittenden, from Arkansas, a classmate at Foster school, would rather throw snowballs than eat them. Both boys came to Willow Run with their parents and are living in the federal housing project there. Because of thousands more like them, the school district has mushroomed to 10 times its original size almost overnight.

Beverly French of the blonde curls (left above), who says that before she came to Willow Run she lived in a trailer “someplace,” plays commandos with Barbara Lee Meek. Barbara lived in Missouri not very long ago. Both girls, with their defense working parents, live in the Willow Run housing project and are enrolled in the day-care program for pre-school age children in the Foster school nursery.