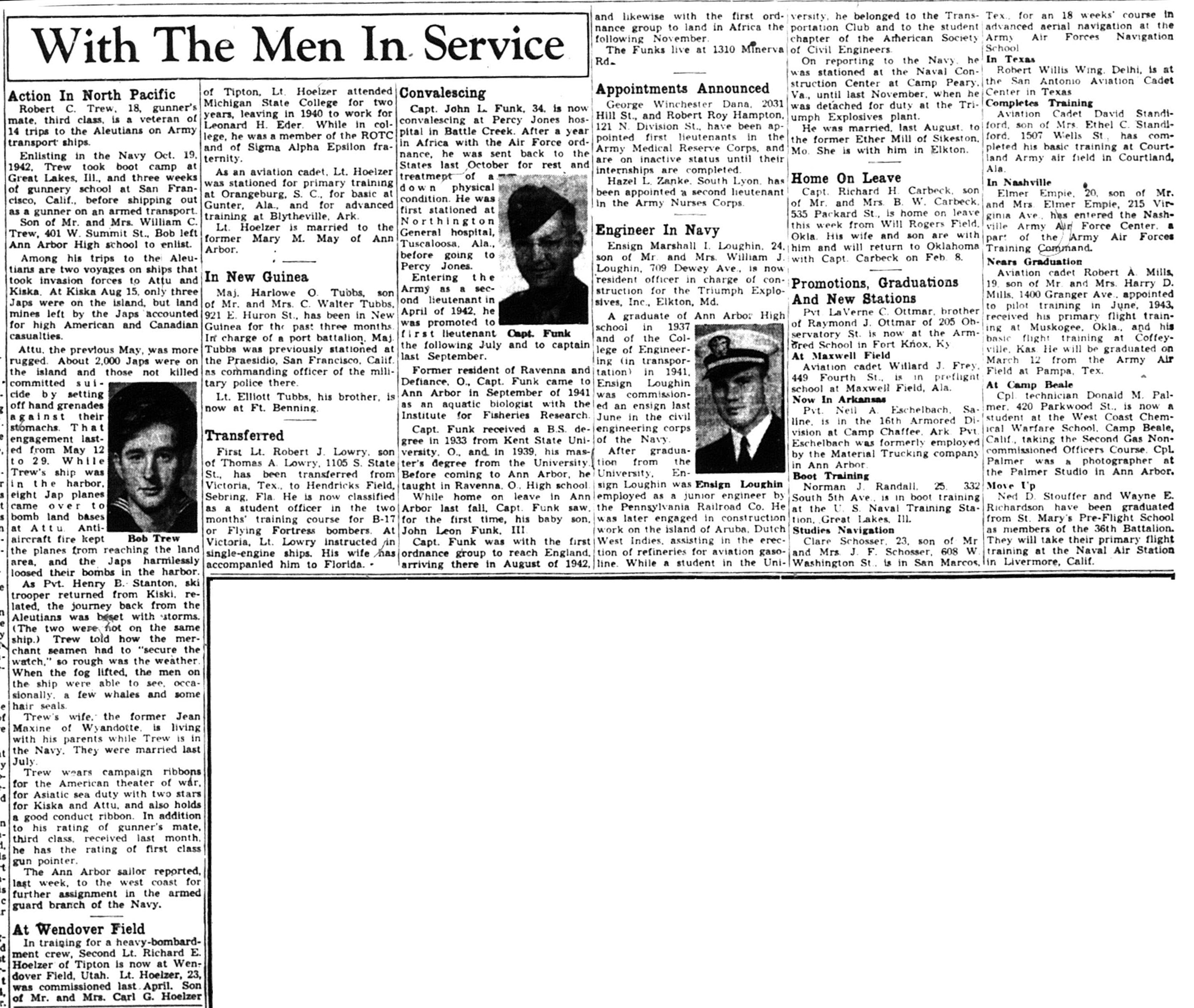 Robert C. Trew, 18, gunner’s mate, third class, is a veteran of 14 trips to the Aleutians on Army transport ships.

Enlisting In the Navy Oct. 19, 1942, Trew took boot camp at Great Lakes. 111., and three weeks of gunnery school at San Francisco, Calif., before shipping out as a gunner on an armed transport.

Among his trips to the Aleutians are two voyages on ships that took invasion forces to Attu and Kiska. At Kiska Aug 15. only three Japs were on the island, but land mines left by the Japs accounted for high American and Canadian casualties.

Attu. the previous May, was more rugged. About 2,000 Japs were on the island and those not killed committed suicide by setting off hand grenades against their stomachs. That engagement lasted from May 12 to 29. While Trew's ship was in the harbor, eight Jap planes came over to bomb land bases at Attu. Anti-aircraft fire kept the planes from reaching the land area, and the Japs harmlessly loosed their bombs in the harbor.

As Pvt. Henry B. Stanton, ski trooper returned from Kiski, related, the journey back from the Aleutians was beset with storms. (The two were not on the same ship.) Trew told how the merchant seamen had to '’secure the watch," so rough was the weather. When the fog lifted, the men on the ship were able to see. occasionally. a few whales and some hair seals.

Trew's wife, the former Jean Maxine of Wyandotte, is living with his parents while Trew is in the Navy. They were married last July.

Trew wears campaign ribbons for the American theater of war, for Asiatic sea duty with two stars for Kiska and Attu, and also holds a good conduct ribbon. In addition to his rating of gunner's mate, third class, received last month, he has the rating of first class gun pointer.

The Ann Arbor sailor reported, last week, to the west coast for further assignment in the armed guard branch of the Navy.

In training for a heavy-bombardment crew, Second Lt. Richard E. Hoelzer of Tipton Is now at Wendover Field, Utah. Lt. Hoelzer, 23, was commissioned last April. Son of Mr. and Mrs. Carl G. Hoelzer of Tipton, Lt. Hoelzer attended Michigan State College for two years, leaving In 1940 to work for Leonard H. Eder. While in college, he was a member of the ROTC and of Sigma Alpha Epsilon fraternity.

As an aviation cadet, Lt. Hoelzer was stationed for primary training at Orangeburg, S. C., for basic at Gunter, Ala., and for advanced training at Blytheville, Ark.

Lt. Hoelzer is married to the former Mary M. May of Ann Arbor.

Maj. Harlowe O Tubbs, son of Mr. and Mrs. C. Walter Tubbs, 921 E. Huron St., has been in New Guinea for the past three months. In charge of a port battalion, Maj. Tubbs was previously stationed at the Praesidio, San Francisco, Calif., as commanding officer of the military police there.

Lt. Elliott Tubbs, his brother, is now at Ft. Benning.

First Lt. Robert J. Lowry, son of Thomas A. Lowry, 1105 S. State St., has been transferred from Victoria, Tex., to Hendricks Field, Sebring, Fla. He is now classified as a student officer in the two months' training course for B-17 or Flying Fortress bombers at Victoria. Lt. Lowry instructed in single-engine ships. His wife has accompanied him to Florida.

Capt. John L. Funk, 34, is now convalescing at Percy Jones hospital in Battle Creek. After a year in Africa with the Air Force ordnance, he was sent back to the States last October for rest and treatment of a down physical condition. He was first stationed at Northington General hospital, Tuscaloosa, Ala., before going to Percy Jones.

Entering the Army as a second lieutenant in April of 1942, he was promoted to first lieutenant last September.

Former resident of Ravenna and Defiance, O., Capt. Funk came to Ann Arbor in September of 1941 as an aquatic biologist with the Institute for Fisheries Research.

Capt. Funk received a B S. degree in 1933 from Kent State University, O., and in 1939, his master's degree from the University. Before coming to Ann Arbor, he taught in Ravenna. O, High school .sign Loughin was Ensign Loughin While home on leave in Ann Arbor last fall, Capt. Funk saw for the first time, his baby son John Leon Funk, Ill.

George Winchester Dana. 2031 Hill St., and Robert Roy Hampton, 121 N. Division St., have been appointed first lieutenants in the Army Medical Reserve Corps, and are on inactive status until their internships arc completed.

Hazel L. Zanke, South Lyon, has been appointed a second lieutenant in the Army Nurses Corps.

Ensign Marshall I. Loughin, 24, son of Mr. and Mrs. William J. Loughin, 709 Dewey Ave., is now resident officer in charge of construction for the Triumph Explosives, Inc., Elkton, Md. A graduate of Ann Arbor High school in 1937 and of the College of Engineering (in transportation) in 1941, Ensign Loughlin was commissioned an ensign last June in the civil engineering corps of the Navy.

After graduation from the University, Ensign Loughin was employed as a junior engineer by the Pennsylvania Railroad Co. He was later engaged in construction work on the island of Aruba, Dutch West Indies, assisting in the erection of refineries for aviation gasoline. While a student in the University, he belonged to the Transportation Club and to the student chapter of the American Society of Civil Engineers.

On reporting to the Navy he was stationed at the Naval Construction Center at Camp Peary, Va., until last November, when he was detached for duty at the Triumph Explosives plant. He was married, last August, to the former Ether Mill of Sikeston, Mo. She is with him in Elkton.

Capt Richard H. Carbeck, son of Mr. and Mrs. B. W. Carbeck, 535 Packard St., is home on leave this week from Will Rogers Field, Okla. His wife and son are with him and will return to Oklahoma with Capt. Carbeck on Feb 8.

Pvt. Neil A Eschelhach, Saline, is in the 16th Armored Division at Camp Chaffee, Ark. Pvt. Eschelbach was formerly employed by the Material Trucking company in Ann Arbor.

Aviation cadet Robert A. Mills, 19, son of Mr. and Mrs. Harry D. Mills, 1400 Granger Ave., appointed to pilot training in June, 1943, received his primary flight training at Muskogee, Okla., and his basic flight training at Coffeyville, Kas. He will be graduated on March 12 from the Army Air Field at Pampa, Tex.

Ned D. Stouffer and Wayne E. Richardson have been graduated from St. Mary's Pre-Flight School as members of the 36th Battalion. They will take their primary flight training at the Naval Air Station in Livermore, Calif.