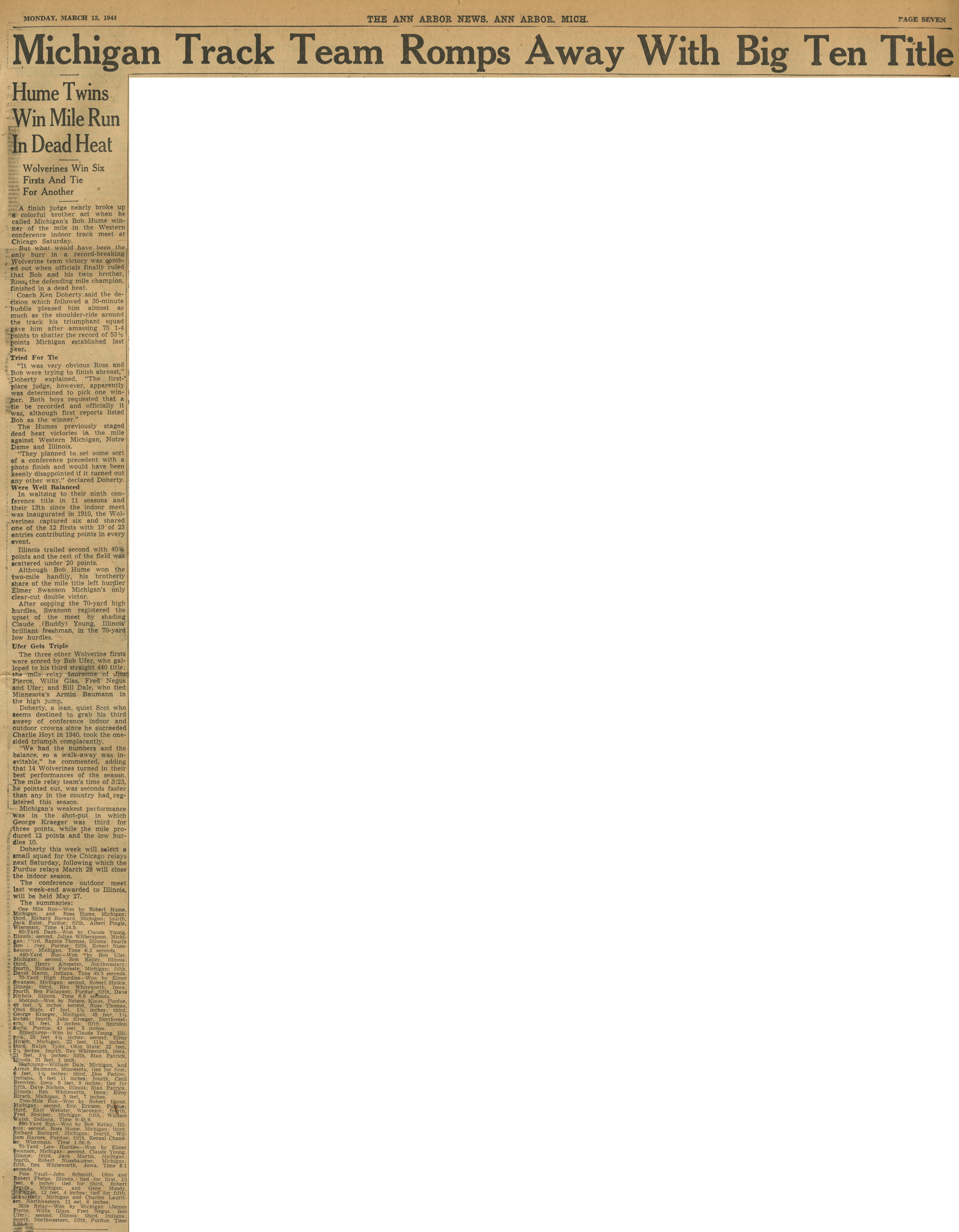 Wolverines Win Six Firsts And Tie For Another

A finish judge nearly broke up a colorful brother act when he called Michigan's Bob Hume winner of the mile in the Western conference indoor track meet at Chicago Saturday.

But what would have been the only burr in a record-breaking Wolverine team victory was combed out when officials finally ruled that Bob and his twin brother, Ross, the defending mile champion, finished in a dead heat.

Coach Ken Doherty said the decision which followed a 30-minute huddle pleased him almost as much as the shoulder-ride around the track his triumphant squad gave him after amassing 75 1-4 points to shatter the record of 53 1/2 points Michigan established last year.

“It was very obvious Ross and Bob were trying to finish abreast," Doherty explained. "The first-place judge, however, apparently was determined to pick one winner. Both boys requested that a tie be recorded and officially it was, although first reports listed Bob as the winner.”

“They planned to set some sort of a conference precedent with a photo finish and would have been keenly disappointed if it turned out any other way,” declared Doherty.

In waltzing to their ninth conference title in 11 seasons and their 13th since the indoor meet was inaugurated in 1910, the Wolverines captured six and shared one of the 12 firsts with 19 of 23 entries contributing points in every event.

Illinois trailed second with 40 1/2 points and the rest of the field was scattered under 20 points.

After copping the 70-yard high hurdles, Swanson registered the upset of the meet by Claude (Buddy) Young, brilliant freshman, in the 70-yard low hurdles.

The three other Wolverine firsts were scored by Bob Ufer, who galloped to his third straight 440 title; the mile relay foursome Pierce, Willis Glas, Fred Negus and Ufer; and Bill Dale, who tied Minnesota's Armin Baumann in the high jump.

Doherty, a lean, quiet Scot who seems destined to grab his third sweep of conference indoor and outdoor crowns since he succeeded Charlie Hoyt in 1940, took the one-sided triumph complacently.

“We had the numbers and the balance, so a walk-away was inevitable,” he commented, adding that 14 Wolverines turned in their best performances of the season. The mile relay team’s time of 3:23, he pointed out, was seconds faster than any in the country had registered this season.

Michigan's weakest performance was in the shot-put in which George Kraeger was third for three points, while the mile produced 12 points and the low hurdles 10.

Doherty this week will select a small squad for the Chicago relays next Saturday, following which the Purdue relays March 28 will close the indoor season.

The conference outdoor meet last week-end awarded to Illinois, will be held May 27.