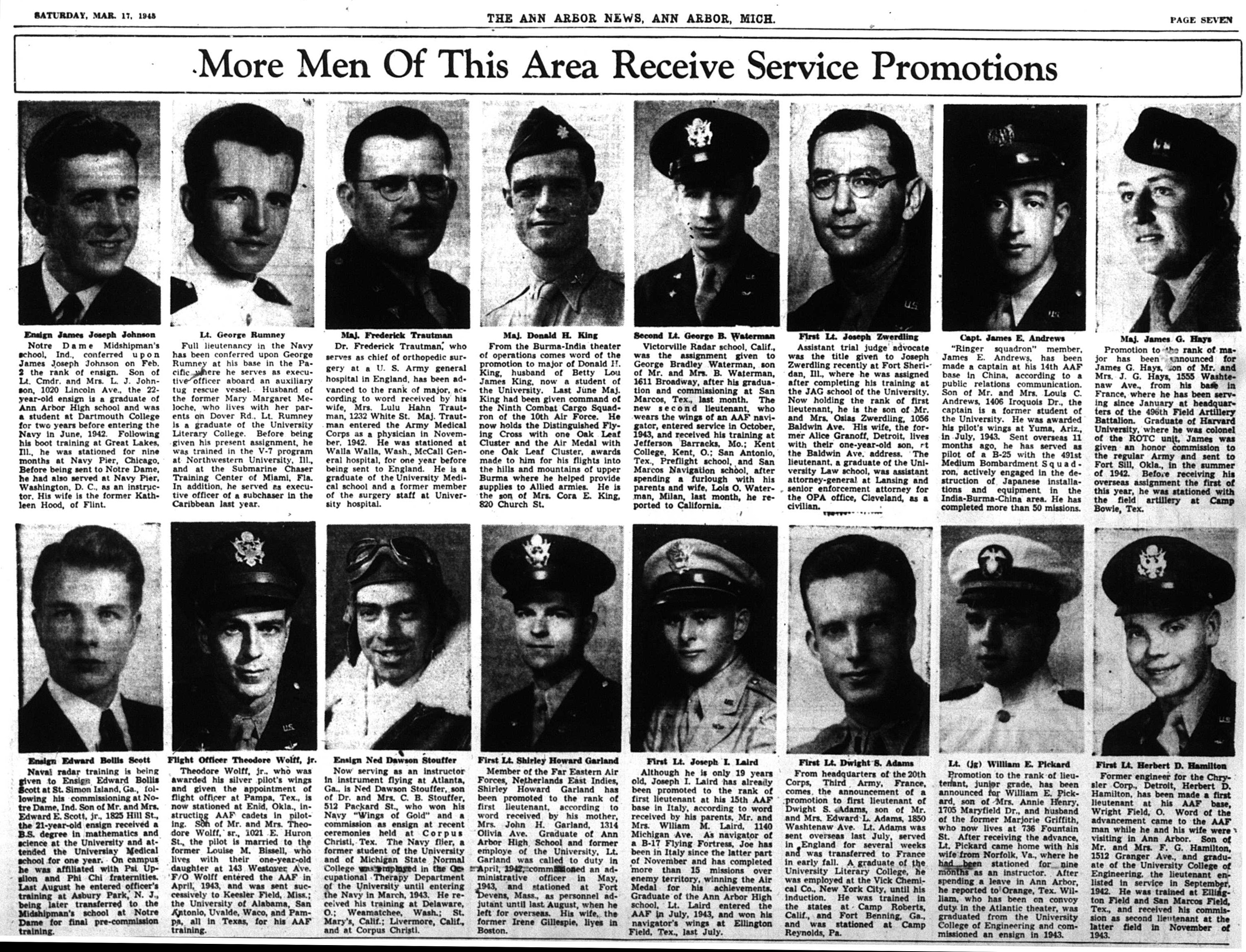 Notre Dame Midshipman’s school, Ind., conferred upon James Joseph Johnson on Feb. 2 the rank of ensign. Son of Lt. Cmdr. and Mrs. L. J. Johnson, 1020 Lincoln Ave., the 22-year-old ensign is a graduate of Ann Arbor High school and was a student at Dartmouth College for two years before entering the Navy in June, 1942. Following his boot training at Great Lakes. Ill., he was stationed for nine months at Navy Pier, Chicago. Before being sent to Notre Dame, he had also served at Navy Pier, Washington, D. C., as an instructor. His wife is the former Kathleen Hood, of Flint.

Full lieutenancy in the Navy has been conferred upon George Rumney at his base in the Pacific where he serves as executive officer aboard an auxiliary tug rescue vessel. Husband of the former Mary Margaret Meloche, who lives with her parents on Dover Rd., Lt. Rumney is a graduate of the University Literary College. Before being given his present assignment, he was trained in the V-7 program at Northwestern University, Ill., and at the Submarine Chaser Training Center of Miami, Fla. In addition, he served as executive officer of a subchaser In the Caribbean last year.

Dr. Frederick Trautman, who serves as chief of orthopedic surgery at a U. S. Army general hospital in England, has been advanced to the rank of major, according to word received by his wife, Mrs. Lulu Hahn Trautman, 1232 White St. Maj. Trautman entered the Army Medical Corps as a physician in November, 1942. He was stationed at Walla Walla, Wash., McCall General hospital, for one year before being sent to England. He is a graduate of the University Medical school and a former member of the surgery staff at University hospital.

From the Burma-India theater of operations comes word of the promotion to major of Donald H. King, husband of Betty Lou James King, now a student of the University. Last June Maj. King had been given command of the Ninth Combat Cargo Squadron of the 10th Air Force. He now holds the Distinguished Flying Cross with one Oak Leaf Cluster and the Air Medal with one Oak Leaf Cluster, awards made to him for his flights into the hills and mountains of upper Burma where he helped provide supplies to Allied armies. He is the son of Mrs. Cora E. King, 820 Church St.

Victorville Radar school. Calif., was the assignment given to George Bradley Waterman, son of Mr. and Mrs. B. Waterman, 1611 Broadway, after his graduation and commissioning at San Marcos, Tex., last month. The new second lieutenant, who wears the wings of an AAF navigator, entered service in October, 1943, and received his training at Jefferson Barracks, Mo.; Kent College, Kent, O.; San Antonio, Tex., Preflight school, and San Marcos Navigation school, after spending a furlough with his parents and wife, Lois O. Waterman, Milan, last month, he reported to California.

Assistant trial judge advocate was the title given to Joseph Zwerdling recently at Fort Sheridan, Ill., where he was assigned after completing his training at the JAG school of the University. Now holding the rank of first lieutenant, he Is the son of Mr. and Mrs. Osias Zwerdling, 1056 Baldwin Ave. His wife, the former Alice Granoff, Detroit, lives with their one-year-old son at the Baldwin Ave. address. The lieutenant, a graduate of the University Law school, was assistant attorney-general at Lansing and senior enforcement attorney for the OPA office, Cleveland, as a civilian.

“Ringer squadron" member, James E. Andrews, has been made a captain at his 14th AAF base in China, according to a public relations communication. Son of Mr. and Mrs. Louis C. Andrews, 1406 Iroquois Dr., the captain is a former student of the University. He was awarded his pilot’s wings at Yuma, Ariz., in July, 1943. Sent overseas 11 months ago, he has served as pilot of a B-25 with the 491st Medium Bombardment Squadron, actively engaged in the destruction of Japanese installations and equipment in the India-Burma-China area. He has completed more than 50 missions.

Promotion to the rank of major has been announced for James G. Hays, son of Mr. and Mrs. J. G. Hays, 1555 Washtenaw Ave., from his base in France, where he has been serving since January at headquarters of the 496th Field Artillery Battalion. Graduate of Harvard University, where he was colonel of the ROTC unit, James was given an honor commission to the regular Army and sent to Fort Sill, Okla., in the summer of 1942. Before receiving his overseas assignment the first of this year, he was stationed with the field artillery at Camp Bowie, Tex.

Naval radar training is being given to Ensign Edward Bollls Scott at St Simon Island, Ga., following his commissioning at Notre Dame, Ind. Son of Mr. and Mrs. Edward E. Scott, jr., 1825 Hill St., the 21-year-old ensign received a B.S. degree In mathematics and science at the University and attended the University Medical School for one year. On campus he was affiliated with Psi UpsiIon and Phi Chi fraternities. Last August he entered officer’s training at Asbury Park, N. J., being later transferred to the Midshipman’s school at Notre Dame for final pre-commission training.

Theodore Wolff, jr., who was awarded his silver pilot’s wings and given the appointment of flight officer at Pampa, Tex., is now stationed at Enid. Okla., instructing AAF cadets in piloting. Son of Mr. and Mrs. Theodore Wolff, sr., 1021 E. Huron St., the pilot is married to the former Louise M. Bissell, who lives with their one-year-old daughter at 143 Westover Ave. F/O Wolff entered the AAF in April, 1943, and was sent successively to Keesler Field, Miss.; the University of Alabama, San Antonio, Uvalde, Waco, and Pampa, all in Texas, for his AAF training.

Now serving as an instructor in instrument flying at Atlanta, Ga., is Ned Dawson Stouffer, son of Dr. and Mrs. C. B. Stouffer, 512 Packard St., who won his Navy “Wings of Gold" and a commission as ensign at recent ceremonies held at Corpus Christi,Tex. The Navy flier, a former student of the University and of Michigan State Normal College was employed in the Occupational Therapy Department of the University until entering the Navy in March, 1943. He received his training at Delaware, O.; Weamatchee, Wash.; St. Mary's, Calif.; Livermore, Calif., and at Corpus Christi.

Member of the Far Eastern Air Forces, Netherlands East Indies, Shirley Howard Garland has been promoted to the rank of first lieutenant, according to word received by his mother, Mrs. John H. Garland, 1314 Olivia Ave. Graduate of Ann Arbor High School and former employee of the University, Lt. Garland was called to duty in April, 1942, commissioned an administrative officer in May, 1943, and stationed at Fort Devens, Mass., as personnel adjutant until last August, when he left for overseas. His wife, the former Irene Gillespie, lives In Boston.

Although he is only 19 years old. Joseph I. Laird has already been promoted to the rank of first lieutenant at his 15th AAF base In Italy, according to word received by his parents, Mr. and Mrs. Wiliam M. Laird, 1140 Michigan Ave. As navigator of a B-17 Flying Fortress, Joe has been in Italy since the latter part of November and has completed more than 15 missions over enemy territory, winning the Air Medal for his achievements. Graduate of the Ann Arbor High school, Lt. Laird entered the AAF in July, 1943, and won his navigator's wings at Ellington Field, Tex., last July.

From headquarters of the 20th Corps, Third Army, France, comes the announcement of a promotion to first lieutenant of Dwight S. Adams, son of Mr. and Mrs. Edward L. Adams, 1850 Washtenaw Ave. Lt. Adams was sent overseas last July, served In England for several weeks and was transferred to France in early fall. A graduate of the University Literary College, he was employed at the Vick Chemical Co., New York City, until his induction. He was trained in the states at Camp Roberts, Calif., and Fort Benning, Ga., and was stationed at Camp Reynolds, Pa.

Promotion to the rank of lieutenant, junior grade, has been announced for William E. Pickard, son of Mrs. Annie Henry, 1705 Maryfield Dr., and husband of the former Marjorie Griffith, who now lives at 736 Fountain St. After receiving the advance, Lt. Pickard came home with his wife from Norfolk, Va., where he had been stationed for nine months as an instructor. After spending a leave in Ann Arbor, he reported to Orange, Tex. William. who has been on convoy duty in the Atlantic theater, was graduated from the University College of Engineering and commissioned an ensign in 1943.

Former engineer for the Chrysler Corp., Detroit, Herbert D. Hamilton, has been made a first lieutenant at his AAF base, Wright Field, O. Word of the advancement came to the AAF man while he and his wife were' visiting in Ann Arbor. Son of Mr. and Mrs. F. G. Hamilton, 1512 Granger Ave., and graduate of the University College of Engineering, the lieutenant enlisted in service in September, 1942. He was trained at Ellington Field and San Marcos Field, Tex., and received his commission as second lieutenant at the latter field In November of 1943.