Three In One Family Have Given Lives 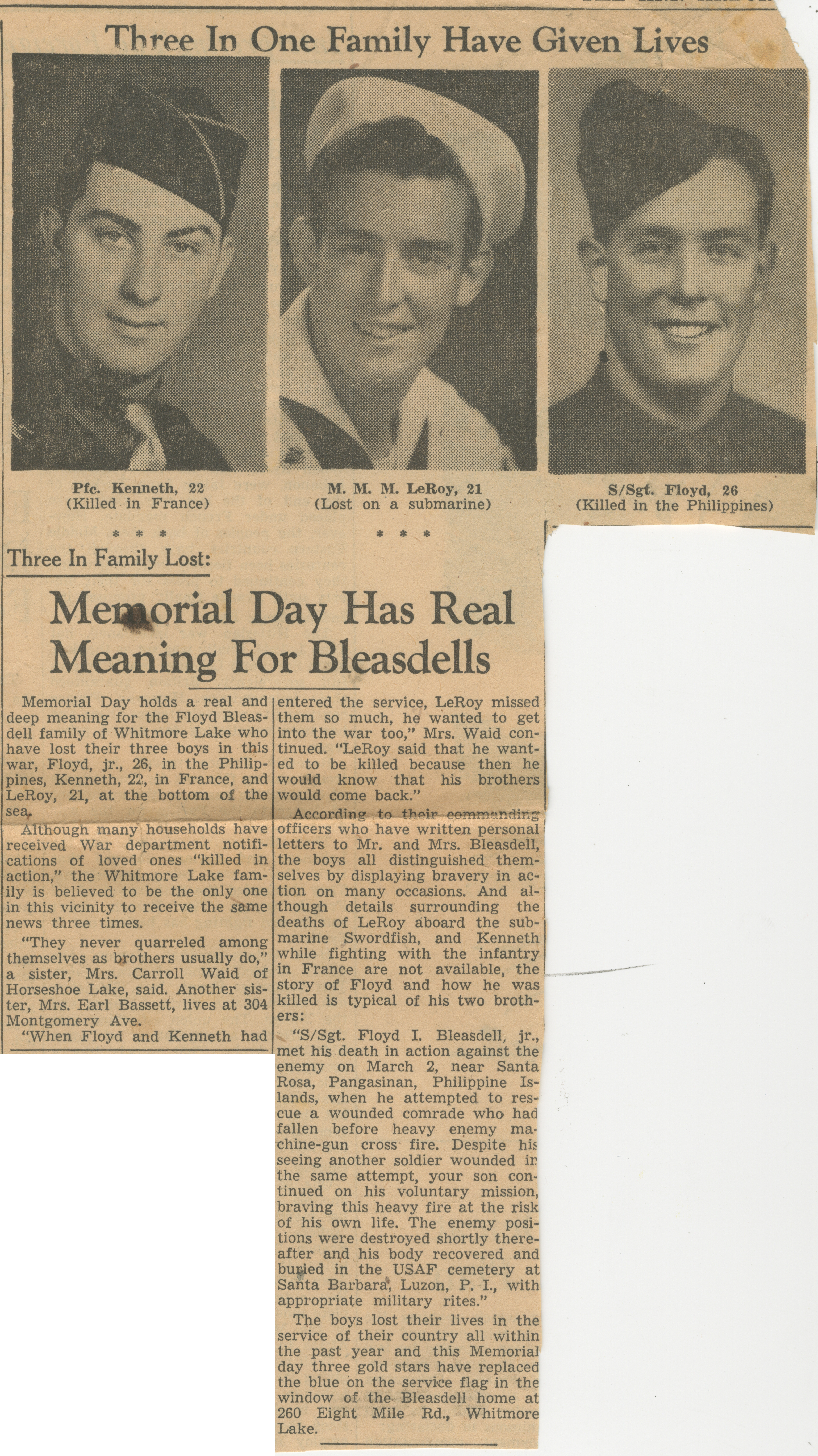 ﻿Three In One Family Have Given Lives

(Lost on a submarine)

(Killed in the Philippines)

Memorial Day holds a real and deep meaning for the Floyd Bleasdell family of Whitmore Lake who have lost their three boys in this war, Floyd, jr., 26, in the Philippines, Kenneth, 22, in France, and LeRoy, 21, at the bottom of the sea.

Although many households have received War department notifications of loved ones “killed in action,” the Whitmore Lake family is believed to be the only one in this vicinity to receive the same news three times.

“They never quarreled among themselves as brothers usually do,” a sister, Mrs. Carroll Waid of Horseshoe Lake, said. Another sister, Mrs. Earl Bassett, lives at 304 Montgomery Ave.

"When Floyd and Kenneth had entered the service, LeRoy missed them so much, he wanted to get into the war too,” Mrs. Waid continued. “LeRoy said that he wanted to be killed because then he would know that his brothers would come back.”

According to their commanding officers who have written personal letters to Mr. and Mrs. Bleasdell, the boys all distinguished themselves by displaying bravery in action on many occasions. And although details surrounding the deaths of LeRoy aboard the submarine Swordfish, and Kenneth while fighting with the infantry in France are not available, the story of Floyd and how he was killed is typical of his two brothers:

“S/Sgt. Floyd I. Bleasdell, jr., met his death in action against the enemy on March 2, near Santa Rosa, Pangasinan, Philippine Islands, when he attempted to rescue a wounded comrade who had fallen before heavy enemy machine-gun cross fire. Despite his seeing another soldier wounded in the same attempt, your son continued on his voluntary mission, braving this heavy fire at the risk of his own life. The enemy positions were destroyed shortly thereafter and his body recovered and buried in the USAF cemetery at Santa Barbara, Luzon, P. I., with appropriate military rites.”

The boys lost their lives in the service of their country all within the past year and this Memorial day three gold stars have replaced the blue on the service flag in the window of the Bleasdell home at 260 Eight Mile Rd., Whitmore Lake.