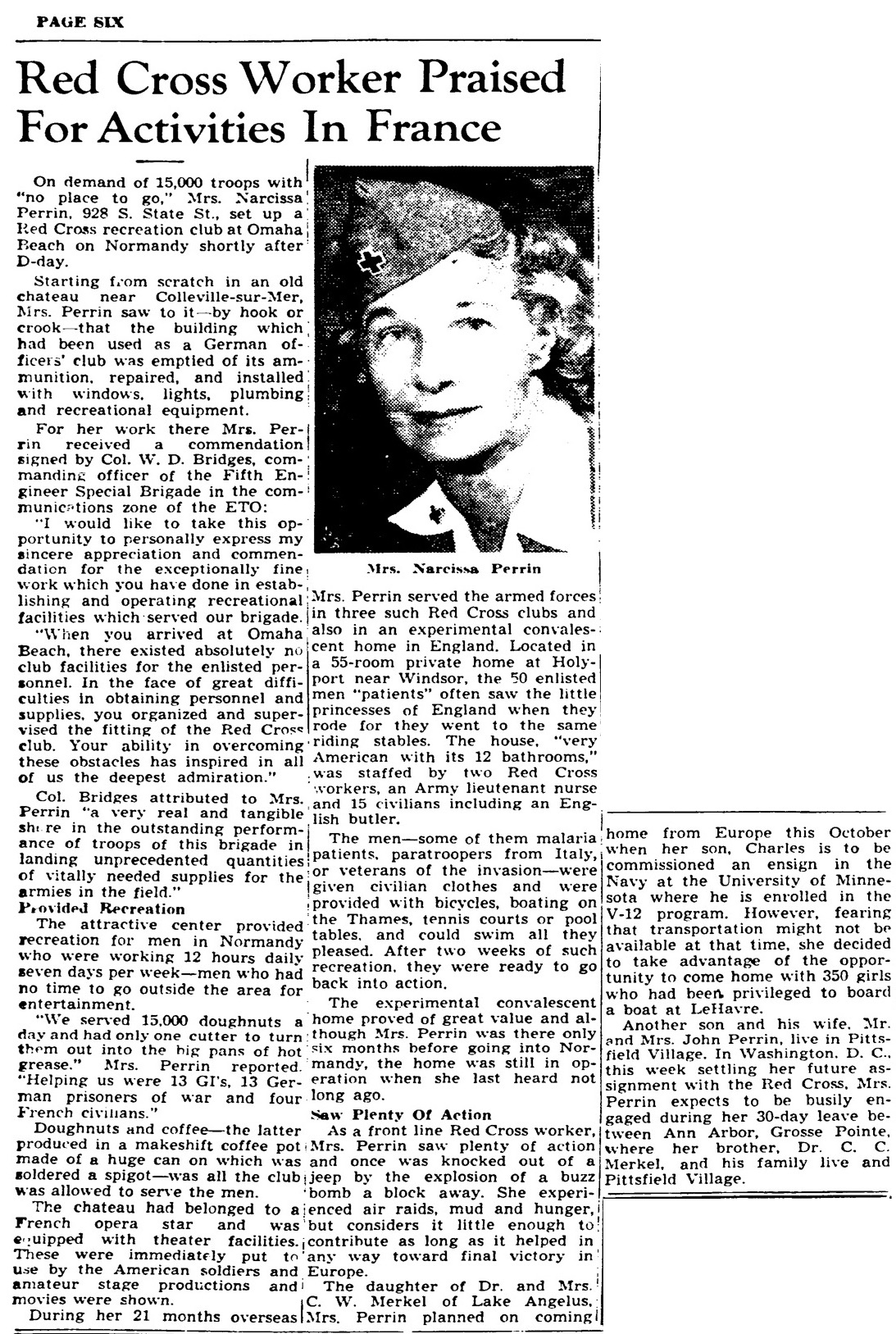 On demand of 15,000 troops with "no place to go," Mrs. Narcissa Perrin, 928 S. State St., set up a Red Cross recreation club at Omaha Beach on Normandy shortly after D-day.

Starting from scratch in an old chateau near Colleville-sur-Mer, Mrs. Perrin saw to it—by hook or crook—that the building which had been used as a German officers' club was emptied of its ammunition, repaired, and installed with windows, lights, plumbing and recreational equipment.

For her work there Mrs. Perrin received a commendation signed by Col. W. D. Bridges, commanding officer of the Fifth Engineer Special Brigade in the communications zone of the ETO:

"I would like to take this opportunity to personally express my sincere appreciation and commendation for the exceptionally fine work which you have done in establishing and operating recreational facilities which served our brigade.

"When you arrived at Omaha Beach, there existed absolutely no club facilities for the enlisted personnel. In the face of great difficulties in obtaining personnel and supplies, you organized and supervised the fitting of the Red Cross club. Your ability in overcoming these obstacles has inspired in all of us the deepest admiration.”

Col. Bridges attributed to Mrs. Perrin "a very real and tangible share in the outstanding performance of troops of this brigade in landing unprecedented quantities of vitally needed supplies for the armies in the field.”

The attractive center provided recreation for men in Normandy who were working 12 hours daily seven days per week—men who had no time to go outside the area for entertainment.

“We served 15,000 doughnuts a day and had only one cutter to turn them out into the big pans of hot grease.” Mrs. Perrin reported. "Helping us were 13 GIs, 13 German prisoners of war and four French civilians.”

Doughnuts and coffee—the latter produced in a makeshift coffee pot made of a huge can on which was soldered a spigot—was all the club was allowed to serve the men.

The chateau had belonged to a French opera star and was equipped with theater facilities. These were immediately put to use by the American soldiers and amateur stage productions and movies were shown.

During her 21 months overseas Mrs. Narcissa Perrin served the armed forces in three such Red Cross clubs and also in an experimental convalescent home in England. Located in a 55-room private home at Holyport near Windsor, the 50 enlisted men "patients” often saw the little princesses of England when they rode for they went to the same riding stables. The house, "very American with its 12 bathrooms," was staffed by two Red Cross workers, an Army lieutenant nurse and 15 civilians including an English butler.

The men—some of them malaria patients, paratroopers from Italy, or veterans of the invasion—were given civilian clothes and were provided with bicycles, boating on the Thames, tennis courts or pool tables, and could swim all they pleased. After two weeks of such recreation, they were ready to go back into action.

The experimental convalescent home proved of great value and although Mrs. Perrin was there only six months before going into Normandy, the home was still in operation when she last heard not long ago.

As a front line Red Cross worker, Mrs. Perrin saw plenty of action and once was knocked out of a jeep by the explosion of a buzz bomb a block away. She experienced air raids, mud and hunger, but considers it little enough to contribute as long as it helped in any way toward final victory in Europe.

The daughter of Dr. and Mrs. C. W. Merkel of Lake Angelus, Mrs. Perrin planned on coming home from Europe this October when her son, Charles is to be commissioned an ensign in the Navy at the University of Minnesota where he is enrolled in the V-12 program. However, fearing that transportation might not be available at that time, she decided to take advantage of the opportunity to come home with 350 girls who had been privileged to board a boat at LeHavre.

Another son and his wife, Mr. and Mrs. John Perrin, live in Pittsfield Village. In Washington. D. C., this week settling her future assignment with the Red Cross, Mrs. Perrin expects to be busily engaged during her 30-day leave between Ann Arbor, Grosse Pointe, where her brother. Dr. C. C. Merkel, and his family live and Pittsfield Village.