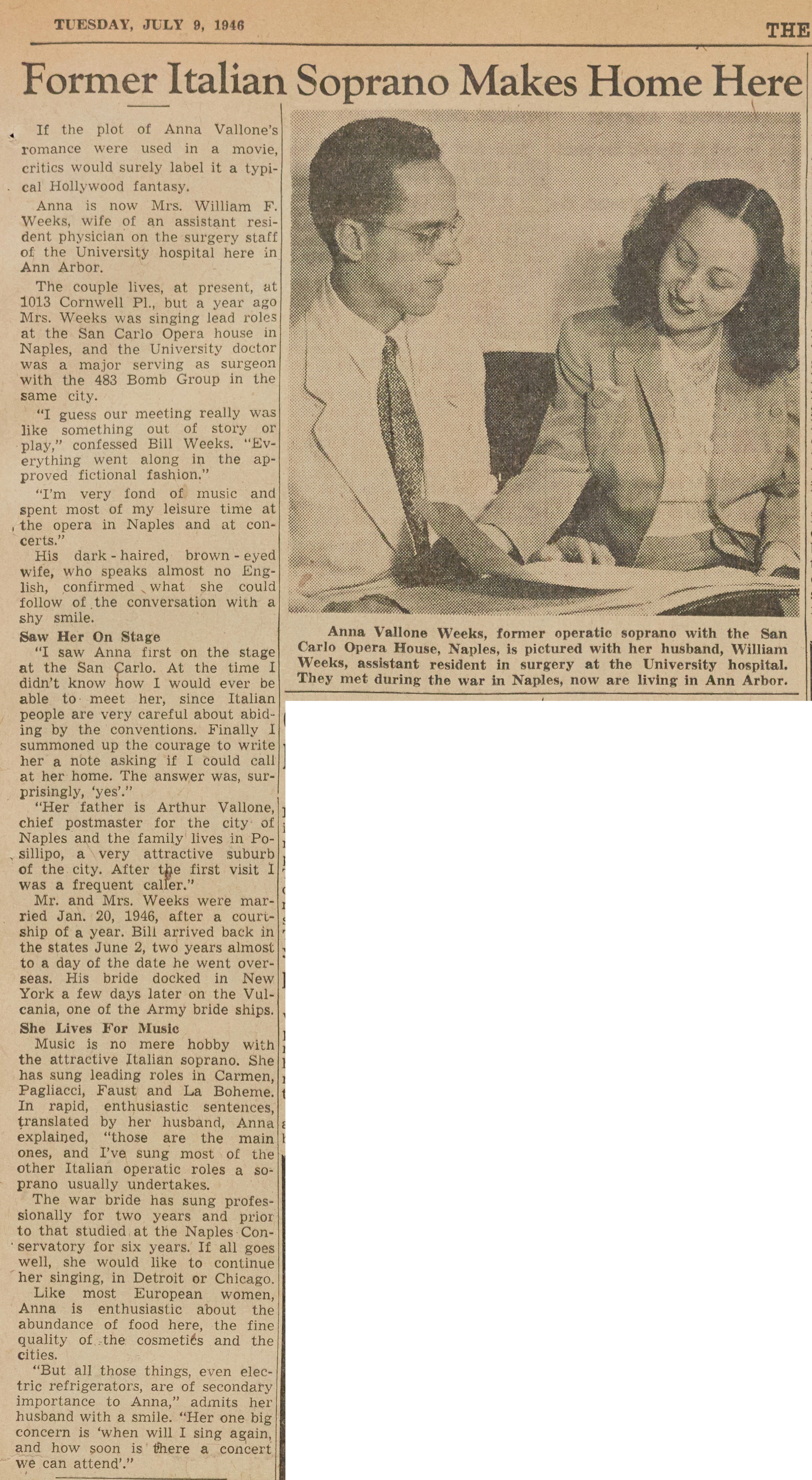 If the plot of Anna Vallone’s romance were used in a movie, critics would surely label it a typical Hollywood fantasy.

Anna is now Mrs. William F. Weeks, wife of an assistant resident physician on the surgery staff of the University hospital here in Ann Arbor.

The couple lives, at present, at 1013 Cornwell PI., but a year ago Mrs. Weeks was singing lead roles at the San Carlo Opera house in Naples, and the University doctor was a major serving as surgeon with the 483 Bomb Group in the same city.

"I guess our meeting really was like something out of story or play," confessed Bill Weeks. "Everything went along in the approved fictional fashion.”

“I’m very fond of music and spent most of my leisure time at the opera in Naples and at concerts.”

His dark haired, brown - eyed wife, who speaks almost no English, confirmed what she could follow of the conversation with a shy smile.

Saw Her On Stage

"I saw Anna first on the stage at the San Carlo. At the time I didn’t know how I would ever be able to meet her, since Italian people are very careful about abiding by the conventions. Finally I summoned up the courage to write her a note asking if I could call at her home. The answer was, surprisingly, ‘yes’.”

“Her father is Arthur Vallone, chief postmaster for the city of Naples and the family lives in Posillipo, a very attractive suburb of the city. After the first visit I was a frequent caller.”

Mr. and Mrs. Weeks were married Jan. 20, 1946, after a courtship of a year. Bill arrived back in the states June 2, two years almost to a day of the date he went overseas. His bride docked in New York a few days later on the Vulcania, one of the Army bride ships.

She Lives For Music

Music is no mere hobby with the attractive Italian soprano. She has sung leading roles in Carmen, Pagliacci, Faust and La Boheme. In rapid, enthusiastic sentences, translated by her husband, Anna explained, “those are the main ones, and I’ve sung most of the other Italian operatic roles a soprano usually undertakes.

The war bride has sung professionally for two years and prior to that studied at the Naples Conservatory for six years. If all goes well, she would like to continue her singing, in Detroit or Chicago.

Like most European women, Anna is enthusiastic about the abundance of food here, the fine quality of the cosmetics and the cities.

“But all those things, even electric refrigerators, are of secondary importance to Anna,” admits her husband with a smile. “Her one big concern is ‘when will I sing again, and how soon is there a concert we can attend’.”

Anna Vallone Weeks, former operatic soprano with the San Carlo Opera House, Naples, is pictured with her husband, William Weeks, assistant resident in surgery at the University hospital. They met during the war in Naples, now are living in Ann Arbor.