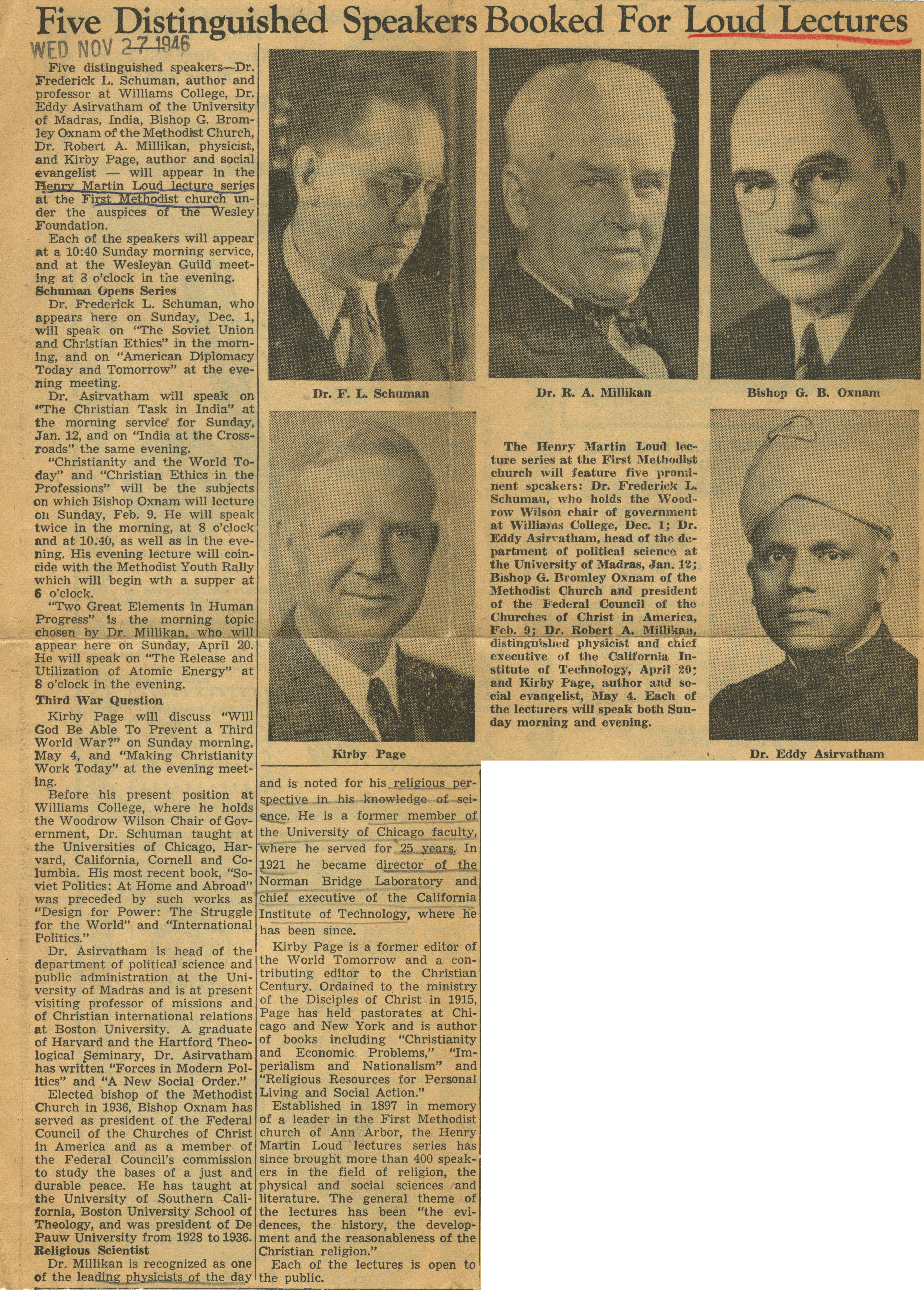 Five distinguished speakers—Dr. Frederick L. Schuman, author and professor at Williams College, Dr. Eddy Asirvatham of the University of Madras, India, Bishop G. Bromley Oxnam of the Methodist Church, Dr. Robert A. Millikan, physicist, and Kirby Page, author and social evangelist — will appear in the Henry Martin Loud lecture series at the First Methodist church under the auspices of the Wesley Foundation.

Each of the speakers will appear at a 10:40 Sunday morning service, and at the Wesleyan Guild meeting at 8 o’clock in the evening.

Dr. Frederick L. Schuman, who appears here on Sunday, Dec. 1, will speak on “The Soviet Union and Christian Ethics” in the morning, and on “American Diplomacy Today and Tomorrow” at the evening meeting.

Dr. Asirvatham will speak on “The Christian Task in India” at the morning service for Sunday, Jan. 12, and on “India at the Crossroads” the same evening.

“Christianity and the World Today” and “Christian Ethics in the Professions” will be the subjects on which Bishop Oxnam will lecture on Sunday, Feb. 9. He will speak twice in the morning, at 8 o’clock and at 10:40, as well as in the evening. His evening lecture will coincide with the Methodist Youth Rally which will begin with a supper at 6 o’clock.

“Two Great Elements in Human Progress” Is the morning topic chosen by Dr. Millikan, who will appear here on Sunday, April 20. He will speak on “The Release and Utilization of Atomic Energy” at 8 o’clock in the evening.

Kirby Page will discuss “Will God Be Able To Prevent a Third World War?” on Sunday morning, May 4, and “Making Christianity Work Today” at the evening meeting.

Before his present position at Williams College, where he holds the Woodrow Wilson Chair of Government, Dr. Schuman taught at the Universities of Chicago, Harvard, California, Cornell and Columbia. His most recent book, “Soviet Politics: At Home and Abroad” was preceded by such works as “Design for Power: The Struggle for the World” and “International Politics.”

Dr. Asirvatham is head of the department of political science and public administration at the University of Madras and is at present visiting professor of missions and of Christian international relations at Boston University. A graduate of Harvard and the Hartford Theological Seminary, Dr. Asirvatham has written “Forces in Modern Politics” and “A New Social Order.”

Dr. Millikan is recognized as one of the leading physicists of the day and is noted for his religious perspective in his knowledge of science. He is a former member of the University of Chicago faculty, where he served for 25 years. In 1921 he became director of the Norman Bridge Laboratory and chief executive of the California Institute of Technology, where he has been since.

Kirby Page is a former editor of the World Tomorrow and a contributing editor to the Christian Century. Ordained to the ministry of the Disciples of Christ in 1915, Page has held pastorates at Chicago and New York and is author of books including “Christianity and Economic Problems,” “Imperialism and Nationalism” and “Religious Resources for Personal Living and Social Action.”

Established in 1897 in memory of a leader in the First Methodist church of Ann Arbor, the Henry Martin Loud lectures series has since brought more than 400 speakers in the field of religion, the physical and social sciences and literature. The general theme of the lectures has been "the evidences, the history, the development and the reasonableness of the Christian religion.”

Each of the lectures is open to the public.

[image]  The Henry Martin Loud lecture series at the First Methodist church wilt feature five prominent speakers: Dr. Frederick L. Schuman, who holds the Woodrow Wilson chair of government at Williams College, Dec. 1; Dr. Eddy Asirvatham, head of the department of political science at the University of Madras, Jan. 12; Bishop G. Bromley Oxnam of the Methodist Church and president of the Federal Council of the Churches of Christ in America, Feb. 9; Dr. Robert A. Millikan, distinguished physicist and chief executive of the California Institute of Technology, April 20; and Kirby Page, author and social evangelist, May 4. Each of the lecturers will speak both Sunday morning and evening.