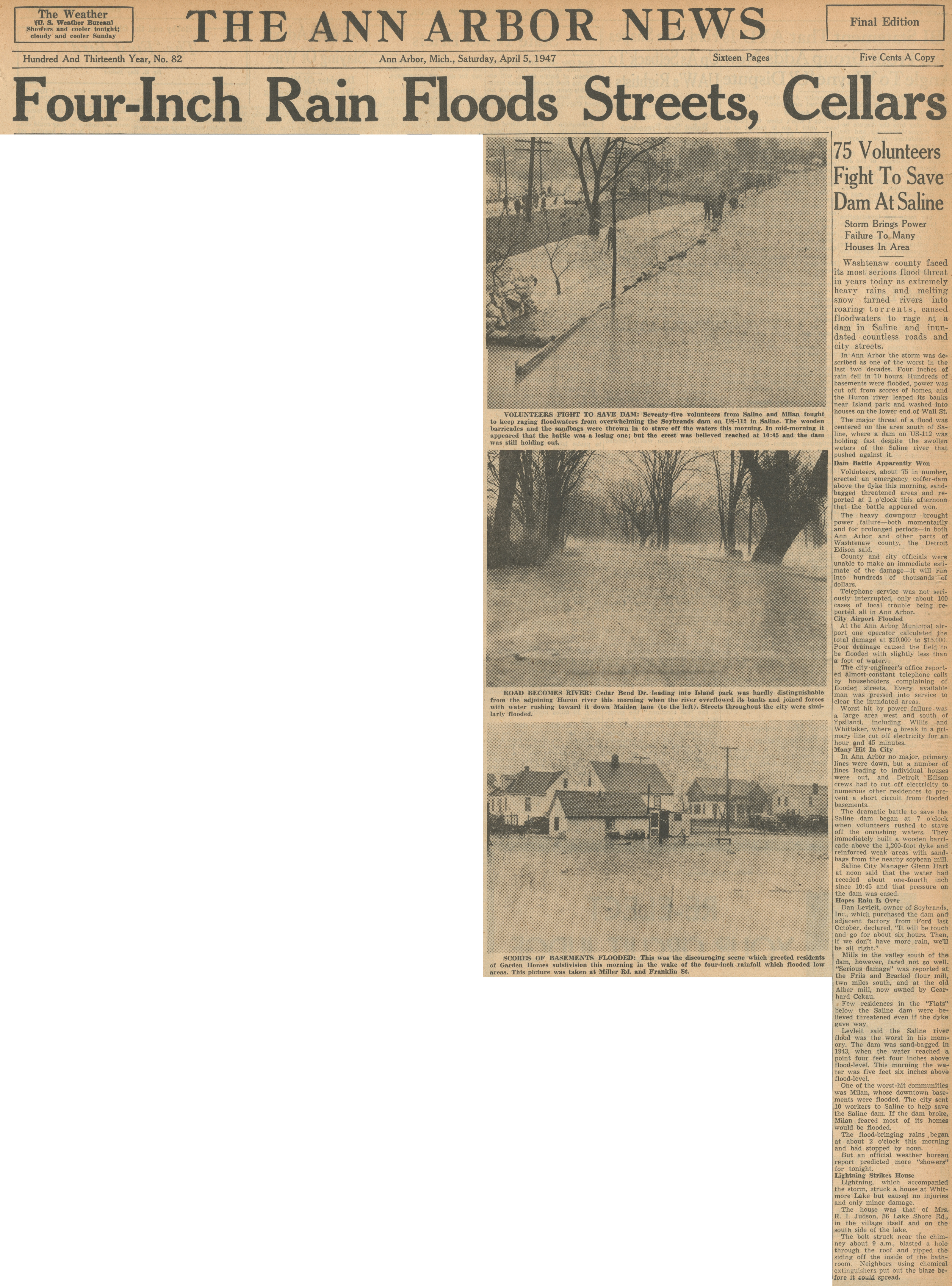 75 Volunteers Fight to Save Dam At Saline

Storm Brings Power Failure To Many Houses In Area

Washtenaw county faced its most serious flood threat in years today as extremely heavy rains and melting snow turned rivers into roaring torrents, cause floodwaters to rage at a dam in Saline and inundated countless roads and city streets.

In Ann Arbor the storm was described as one of the worst in the last two decades. Four inches of rain fell in 10 hours. Hundreds of basements were flooded, power was cut off from scores of homes, and the Huron river leaped its banks near Island park and washed into houses on the lower end of Wall St.

The major threat of a flood was centered on the area south of Saline, where a dam on US-112 was holding fast despite the swollen waters of the Saline river that pushed against it.

Volunteers, about 75 in number, erected an emergency coffer-dam above the dyke this morning, sandbagged threatened areas and reported at 1 o'clock this afternoon that the battle appeared won.

The heavy downpour brought power failure--both momentarily and for prolonged periods--in both Ann Arbor and other parts of Washtenaw county, the Detroit Edison said.

County and city officials were unable to make an immediate estimate of the damage--it will run into hundreds of thousands of dollars.

Telephone service was not seriously interrupted, only about 100 cases of local trouble being reported, all in Ann Arbor.

At the Ann Arbor Municipal airport one operator calculated the total damage at $10,000 to $15,000. Poor drainage caused the field to be flooded with slightly less than a foot of water.

The city engineer's office reported almost-constant telephone calls by householders complaining of flooded streets. Every available man was pressed into service to clear the inundated areas.

Worst hit by power failure was a large area west and south of Ypsilanti, including Willis and Whittaker, where a break in a primary line cut off electricity for an hour and 45 minutes.

Many Hit In City

In Ann Arbor no major, primary lines were down, but a number of lines leading to individual houses were out, and Detroit Edison crews had to cut off electricity to numerous other residences to prevent a short circuit from flooded basements.

The dramatic battle to save the Saline dam began at 7 o'clock when volunteers rushed to stave off the onrushing waters. They immediately built a wooden barricade above the 1,200-foot dyke and reinforced weak areas with sandbags from the nearby soybean mill.

Saline City Manager Glenn Hart at noon said that the water had receded about one-fourth inch since 10:45 and that pressure on the dam was eased.

Hopes Rain Is Over

Dan Levleit, owner of Soybrands, Inc., which purchased the dam and adjacent factory from Ford last October, declared, "It will be touch and go for about six hours. Then, if we don't have more rain, we'll be all right."

Mills in the valley south of the dam, however, fared not so well. "Serious damage" was reported at the Friis and Brackel flour mill, two miles south, and at the old Alber mill, now owned by Gearhard Cekau.

Few residences in the "Flats" below the Saline dam were believbed threatened even if the dyke gave way.

One of the worst-hit communities was Milan, whose downtown basements were flooded. The city sent 10 workers to Saline to help save the Saline dam. If the dam broke, Milan feared most of its homes would be flooded.

The flood-bringing rains began at about 2 o'clock this morning and had stopped by noon.

Lightning, which accompanied the storm, struck a house at Whitmore Lake but caused no injuries and only minor damage.

The house was that of Mrs. R. I. Judson, 36 Lake Shore Dr., in the village itself and on the south side of the lake.

The bolt struck near the chimney about 9 a.m., blasted a hole through the roof and ripped the siding off the inside of the bathroom. Neighbors using chemical extinguishers put out the blaze before it could spread.

VOLUNTEERS FIGHT TO SAVE DAM: Seventy-five volunteers from Saline and Milan fought to keep raging floodwaters from overwhelming the Soybrands dam on US-112 in Saline, The wooden barricades and the sandbags were thrown in to stave off the waters this morning. In mid-morning it appeared that the battle was a losing one; but the crest was believed reached at 10:45 and the dam was still holding out.

ROAD BECOMES RIVER: Cedar Bend Dr. leading into Island park was hardly distinguishable from the adjoining Huron river this morning when the river overflowed its banks and joined forces with water rushing toward it down Maiden lane (to the left). Streets throughout the city were similarly flooded.

SCORES OF BASEMENTS FLOODED: This was the discouraging scene which greeted residents of Garden Homes subdivision this morning in the wake of the four-inch rainfall which flooded low areas. This picture was taken at Miller Rd. and Franklin St.