Inmates Of U-M Zoo Worry About Heat, Too 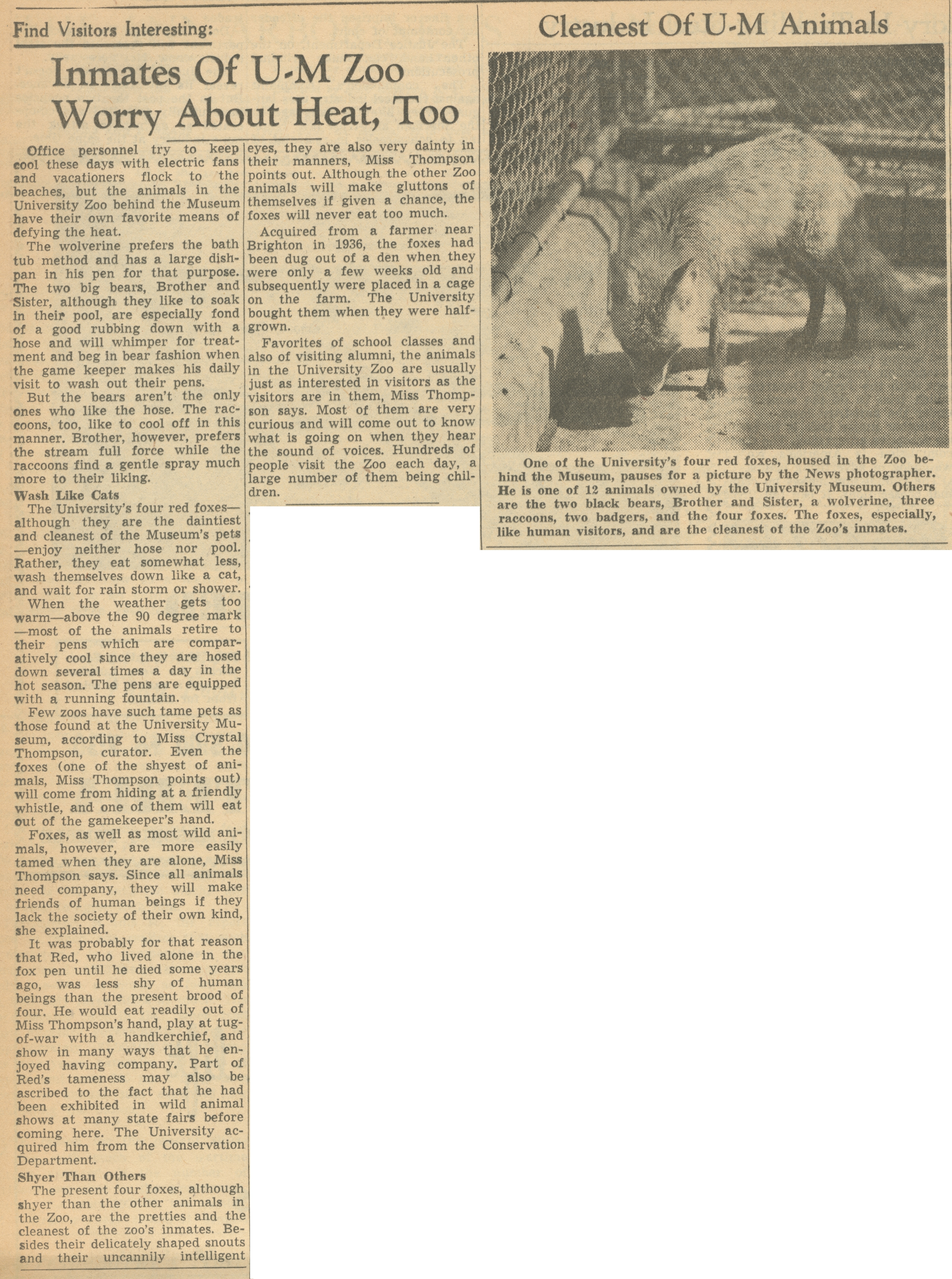 Inmates Of U-M Zoo Worry About Heat, Too

Office personnel try to keep cool these days with electric fans and vacationers flock to the beaches, but the animals in the University Zoo behind the Museum have their own favorite means of defying the heat.

The wolverine prefers the bath tub method and has a large dish-pan in his pen for that purpose. The two big bears, Brother and Sister, although they like to soak in their pool, are especially fond of a good rubbing down with a hose and will whimper for treatment and beg in bear fashion when the game keeper makes his daily visit to wash out their pens.

But the bears aren’t the only ones who like the hose. The raccoons, too, like to cool off in this manner. Brother, however, prefers the stream full force while the raccoons find a gentle spray much more to their liking.

The University's four red foxes—although they are the daintiest and cleanest of the Museum’s pets—enjoy neither hose nor pool. Rather, they eat somewhat less, wash themselves down like a cat, and wait for rain storm or shower.

When the weather gets too warm—above the 90 degree mark—most of the animals retire to their pens which are comparatively cool since they are hosed down several times a day in the hot season. The pens are equipped with a running fountain.

Few zoos have such tame pets as those found at the University Museum, according to Miss Crystal Thompson, curator. Even the foxes (one of the shyest of animals, Miss Thompson points out) will come from hiding at a friendly whistle, and one of them will eat out of the gamekeeper’s hand.

Foxes, as well as most wild animals, however, are more easily tamed when they are alone, Miss Thompson says. Since all animals need company, they will make friends of human beings if they lack the society of their own kind, she explained.

It was probably for that reason that Red, who lived alone in the fox pen until he died some years ago, was less shy of human beings than the present brood of four. He would eat readily out of Miss Thompson’s hand, play at tug-of-war with a handkerchief, and show in many ways that he enjoyed having company. Part of Red’s tameness may also be ascribed to the fact that he had been exhibited in wild animal shows at many state fairs before coming here. The University acquired him from the Conservation Department.

The present four foxes, although shyer than the other animals in the Zoo, are the prettiest and the cleanest of the zoo’s inmates. Besides their delicately shaped snouts and their uncannily intelligent eyes, they are also very dainty in their manners, Miss Thompson points out. Although the other Zoo animals will make gluttons of themselves if given a chance, the foxes will never eat too much.

Acquired from a farmer near Brighton in 1936, the foxes had been dug out of a den when they were only a few weeks old and subsequently were placed in a cage on the farm. The University bought them when they were half-grown.

Favorites of school classes and also of visiting alumni, the animals in the University Zoo are usually just as interested in visitors as the visitors are in them, Miss Thompson says. Most of them are very curious and will come out to know what is going on when they hear the sound of voices. Hundreds of people visit the Zoo each day, a large number of them being children.

One of the University’s four red foxes, housed in the Zoo behind the Museum, pauses for a picture by the News photographer. He is one of 13 animals owned by the University Museum. Others are the two black bears, Brother and Sister, a wolverine, three raccoons, two badgers, and the four foxes. The foxes, especially, like human visitors, and are the cleanest of the Zoo’s inmates.