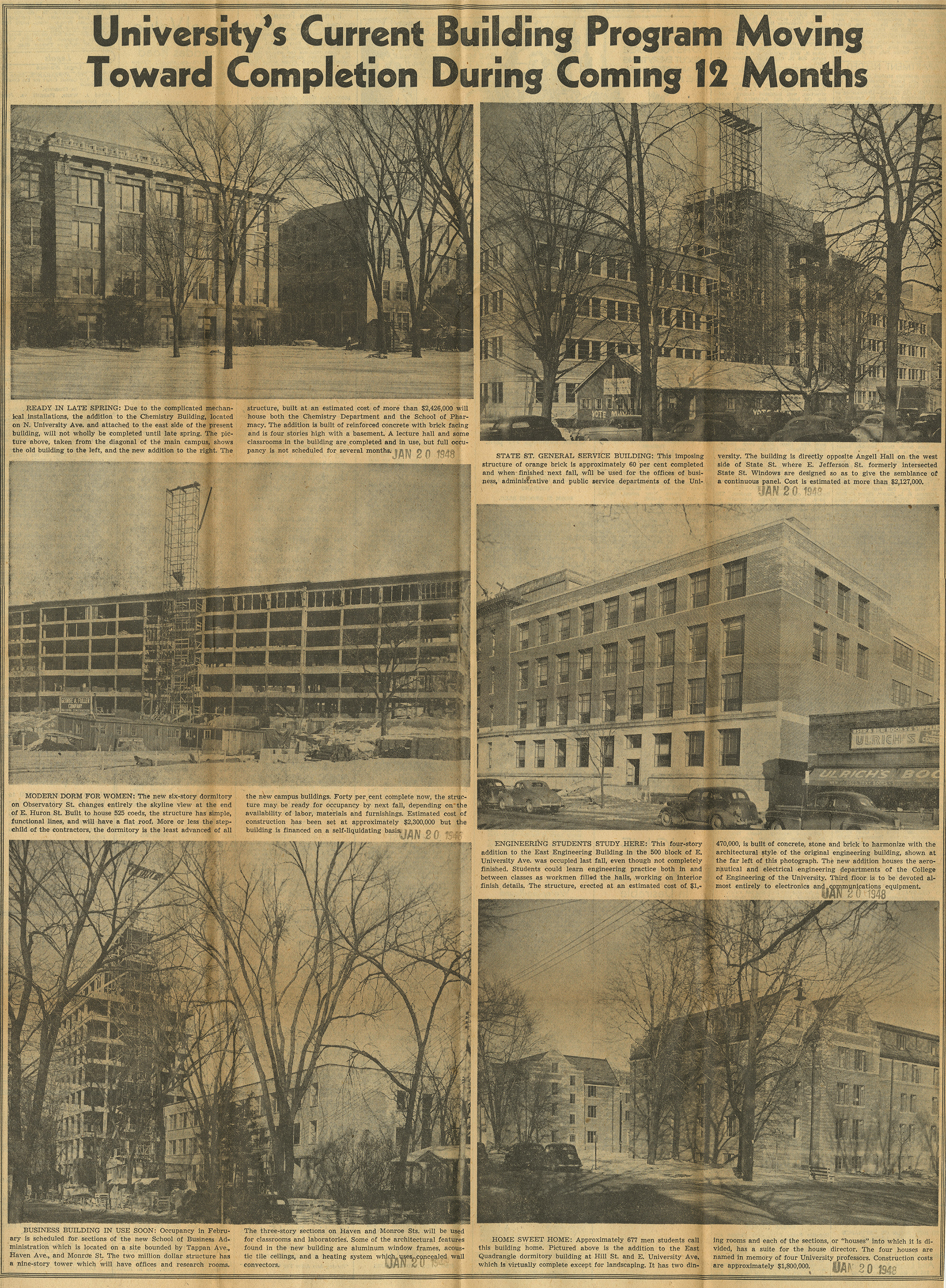 READY IN LATE SPRING: Due to the complicated mechanical installations, the addition to the Chemistry Building, located on N. University Ave. and attached to the east side of the present building, will not wholly be completed until late spring. The picture above, taken from the diagonal of the main campus, shows the old building to the left, and the new addition to the right. The structure, built at an estimated cost of more than $2,426,000 will house both the Chemistry Department and the School of Pharmacy. The addition is built of reinforced concrete with brick facing and is four stories high with a basement. A lecture hall and some classrooms in the building are completed and in use, but full occupancy is not scheduled for several months.

MODERN DORM FOR WOMEN: The new six-story dormitory on Observatory St. changes entirely the skyline view a the end of E. Huron St. Built to house 525 coeds, the structure has simple, functional lines, and will have a flat roof. More or less the stepchild of the contractors, the dormitory is the least advanced of all the new campus buildings. Forty per cent complete now, the structure may be ready for occupancy by next fall, depending on the availability of labor, materials and furnishings. Estimated cost of construction has been set at approximately $2,300,000 but the building is financed on a self-liquidating basis.

BUSINESS BUILDING IN USE SOON: Occupancy in February is scheduled for sections of the new School of Business Administration which is located on a site bounded by Tappan Ave., Haven Ave., and Monroe St. The two million dollar structure has a nine-story tower which will have offices and research rooms. The three-story sections on Haven and Monroe Sts. will be used for classrooms and laboratories. Some of the architectural features found in the new building are aluminum window frames, acoustic tile ceilings, and a heating system which uses concealed wall convectors.

STATE ST. GENERAL SERVICE BUILDING: This imposing structure of orange brick is approximately 60 per cent completed and when finished next fall, will be used for the offices of business, administrative and public service departments of the University. The building is directly opposite Angell Hall on the west side of State St. where E. Jefferson St. formerly intersected State St. Windows are designed so as to give the semblance of a continuous panel. Cost is estimated at more than $2,127,000.

ENGINEERING STUDENTS STUDY HERE: This four-story addition to the East Engineering Building in the 500 block of E. University Ave. was occupied last fall, even though not completely finished. Students could learn engineering practice both in and between classes as workmen filled the halls, working on interior finish details. The structure, erected at an estimated cost of $1,470,000, is built of concrete, stone and brick to harmonize with the architectural style of the original engineering building, shown at far left of this photograph. The new addition houses the aeronautical and electrical engineering departments of the College of Engineering of the University. Third floor is to be devoted almost entirely to electronics and communications equipment.

HOME SWEET HOME: Approximately 677 men students call this building home. Pictured above is the addition to the East Quadrangle dormitory building at Hill St. and E. University Ave. which is virtually complete except for landscaping. It has two dining rooms and each of the sections, or "houses" into which it is divided, has a suite for the house director. The four houses are named in memory of four University professors. Construction costs are approximately $1,800,000.