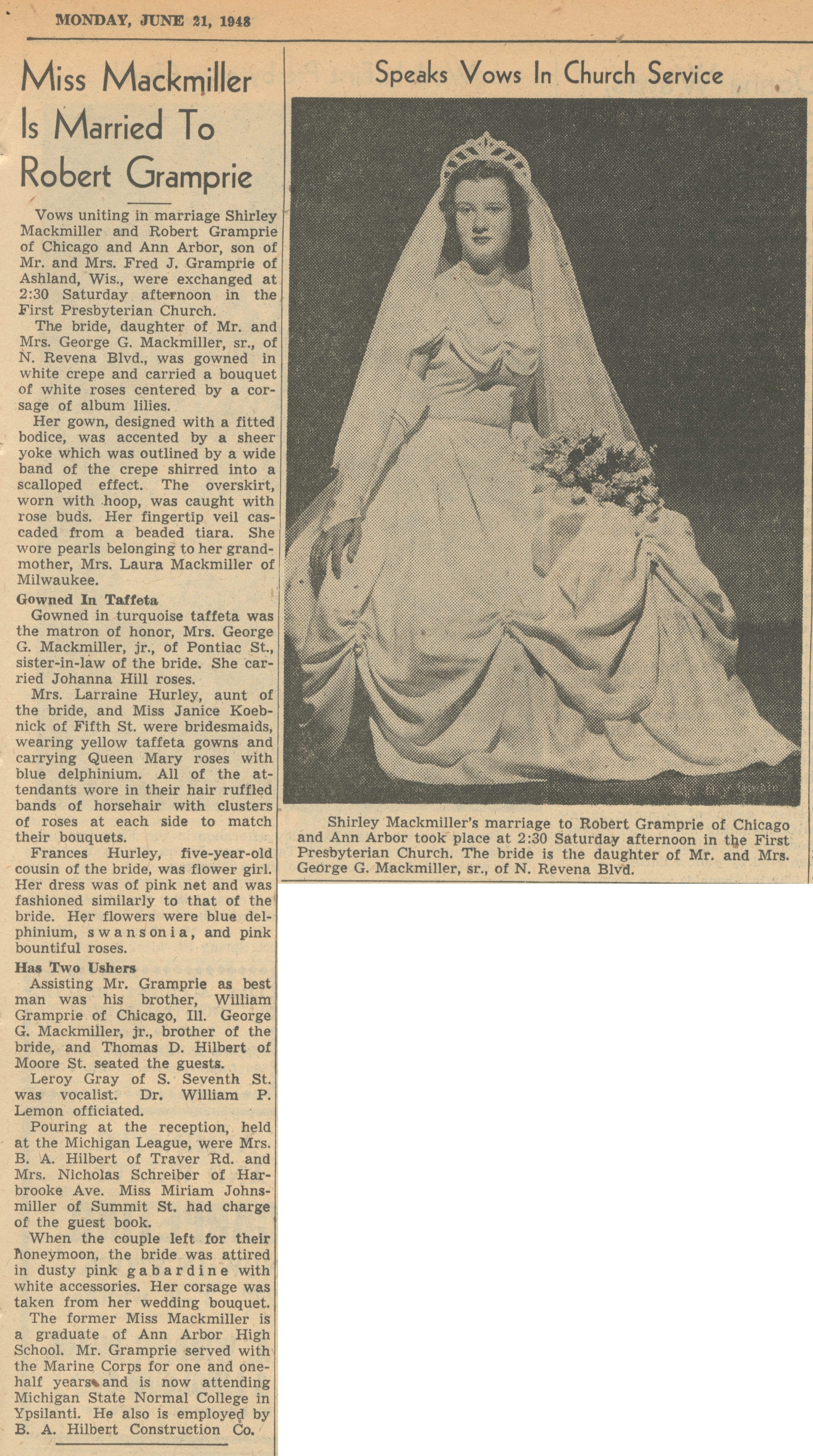 Miss Mackmiller Is Married To Robert Gramprie
Vows uniting in marriage Shirley Mackmiller and Robert Gramprie of Chicago and Ann Arbor, son of Mr. and Mrs. Fred J. Gramprie of Ashland, Wis., were exchanged at 2:30 Saturday afternoon in the First Presbyterian Church.
The bride, daughter of Mr. and Mrs. George G. Mackmiller, sr., of N. Revena Blvd., was gowned in white crepe and carried a bouquet of white roses centered by a corsage of album lilies.
Her down, designed with a fitted bodice, was accented by a sheer yoke which was outlined by a wide band of the crepe shirred into a scalloped effect. The overskirt, worn with a hoop, was caught with rose buds. Her fingertip veil cascaded from a beaded tiara. She wore pearls belonging to her grandmother, Mrs. Laura Mackmiller of Milwaukee.
Gowned In Taffeta
Gowned in turquoise taffeta was the matron of honor, Mrs. George G. Mackmiller, jr., of Pontiac St., sister-in-law of the bride. She carried Johanna Hill roses.
Mrs. Larraine Hurley, aunt of the bride, and Miss Janice Koebnick of Fifth St. were bridesmaids, wearing yellow taffeta gowns and carrying Queen Mary roses with blue delphinium. All of the attendants wore in their hair ruffled bands of horsehair with clusters of roses at each side to match their bouquets.
Frances Hurley, five-year-old cousin of the bride, was flower girl. Her dress was of pink net and was fashioned similarly to that of the bride. Her flowers were blue delphinium, swansonia, and pink bountiful roses.
Has Two Ushers
Assisting Mr. Gramprie as best man was his brother, William Gramprie of Chicago, Ill. George G. Mackmiller, jr., brother of the bride, and Thomas D. Hilbert of Moor St. seated the guests.
Leroy Gray of S. Seventh St. was vocalist. Dr. William P. Lemon officiated.
Pouring at the reception, held at the Michigan League, were Mrs. B. A. Hilbert of Traver Rd. and Mrs. Nicholas Schreiber of Harbrooke Ave. Miss Miriam Johnsmiller of Summit St. had charge of the guest book.
When the couple left for their honeymoon, the bride was attired in dusty pink gabardine with white accessories. Her corsage was taken from her wedding bouquet.
The former Miss Mackmiller is a graduate of Ann Arbor High School. Mr. Gramprie served with the Marine Corps for one and one-half years and is now attending Michigan State Normal College in Ypsilanti. He also is employed by B. A. Hilbert Construction Co.