City And University Will Gain Through Felch Park Trade 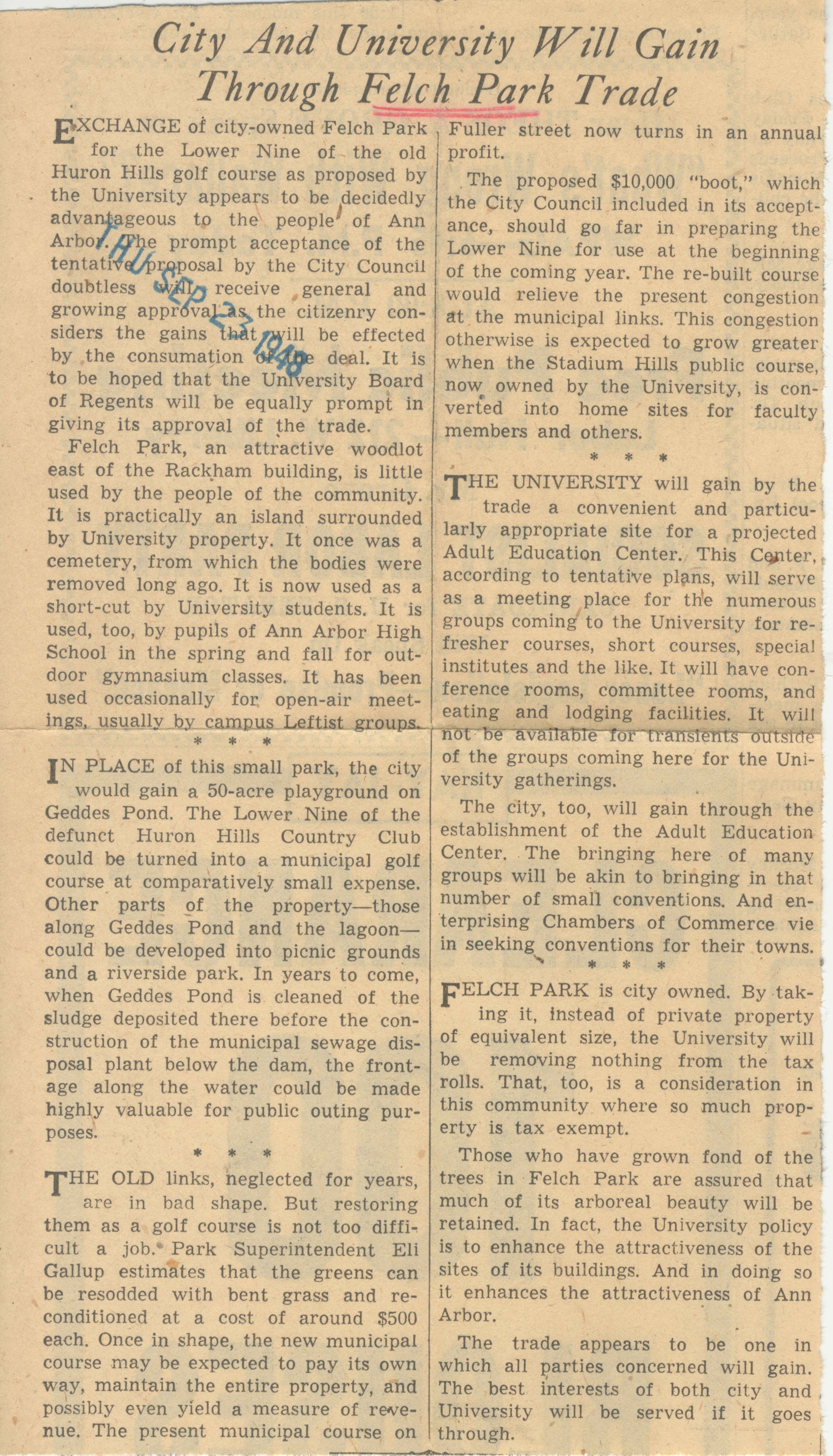 ﻿City And University Will Gain Through Fetch Park Trade

EXCHANGE of city-owned Fetch Park for the Lower Nine of the old Huron Hills golf course as proposed by the University appears to be decidedly advantageous to the people of Ann Arbor. The prompt acceptance of the tentative proposal by the City Council doubtless will receive general and growing approval as the citizenry considers the gains that will be effected by the consummation of the deal. It is to be hoped that the University Board of Regents will be equally prompt in giving its approval of the trade.

Felch Park, an attractive woodlot east of the Rackham building, is little used by the people of the community. It is practically an island surrounded by University property. It once was a cemetery, from which the bodies were removed long ago. It is now used as a short-cut by University students. It is used, too, by pupils of Ann Arbor High School in the spring and fall for outdoor gymnasium classes. It has been used occasionally for, open-air meetings, usually by campus Leftist groups.

IN PLACE of this small park, the city would gain a 50-acre playground on Geddes Pond. The Lower Nine of the defunct Huron Hills Country Club could be turned into a municipal golf course at comparatively small expense. Other parts of the property—those along Geddes Pond and the lagoon—could be developed into picnic grounds and a riverside park. In years to come, when Geddes Pond is cleaned of the sludge deposited there before the construction of the municipal sewage disposal plant below the dam, the frontage along the water could be made highly valuable for public outing purposes.

THE OLD links, neglected for years, are in bad shape. But restoring them as a golf course is not too difficult a job. Park Superintendent Eli Gallup estimates that the greens can be resodded with bent grass and reconditioned at a cost of around $500 each. Once in shape, the new municipal course may be expected to pay its own way, maintain the entire property, and possibly even yield a measure of revenue. The present municipal course on Fuller street now turns in an annual profit.

The proposed $10,000 "boot,” which the City Council included in its acceptance, should go far in preparing the Lower Nine for use at the beginning of the coming year. The re-built course, would relieve the present congestion at the municipal links. This congestion otherwise is expected to grow greater when the Stadium Hills public course, now owned by the University, is converted into home sites for faculty members and others.

THE UNIVERSITY will gain by the trade a convenient and particularly appropriate site for a projected Adult Education Center. This Center, according to tentative plans, will serve as a meeting place for the numerous groups coming to the University for refresher courses, short courses, special institutes and the like. It will have conference rooms, committee rooms, and eating and lodging facilities. It will not be available for transients outside of the groups coming here for the University gatherings.

The city, too, will gain through the establishment of the Adult Education Center. The bringing here of many groups will be akin to bringing in that number of small conventions. And enterprising Chambers of Commerce vie in seeking conventions for their towns.

FELCH PARK is city owned. By taking it, instead of private property of equivalent size, the University will be removing nothing from the tax rolls. That, too, is a consideration in this community where so much property is tax exempt.

The trade appears to be one in which all parties concerned will gain. The best interests of both city and University will be served if it goes through.