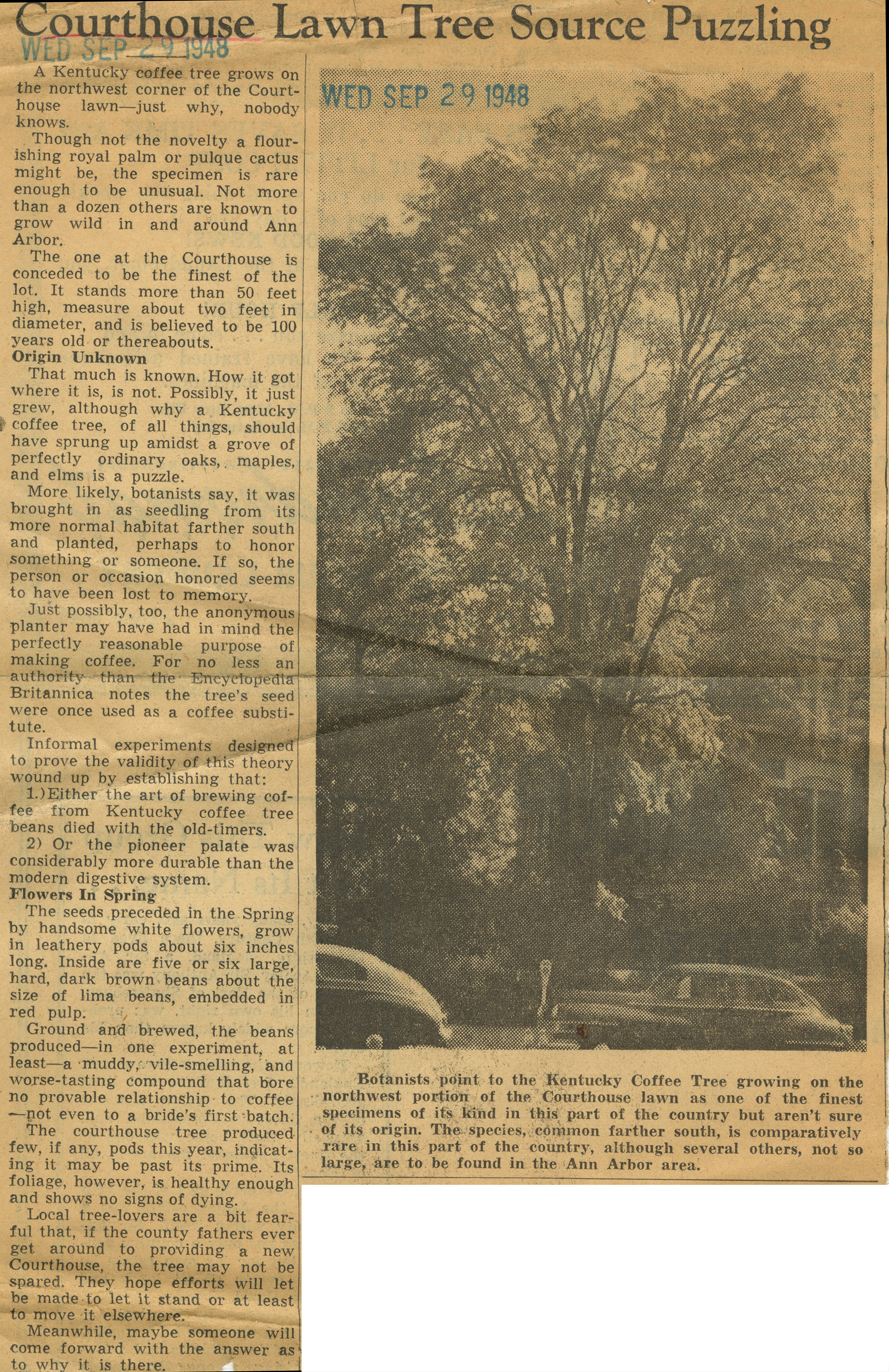 A Kentucky coffee tree grows on the northwest corner of the Courthouse lawn-just why, nobody knows.
Though not the novelty a flourishing royal palm or pulque cactus might be, the specimen is rare enough to be unusual. Not more than a dozen others are known to grow wild in and around Ann Arbor.
The one at the Courthouse is conceded to be the finest of the lot. It stands more than 50 feet high, measure about two feet in diameter, and is believed to be 100 years old or thereabouts. Origin Unknown
That much is known. How it got where it is, is not. Possibly, it just grew, although why a Kentucky coffee tree, of all things, should have sprung up amidst a grove of perfectly ordinary oaks, maples, and elms is a puzzle.
More likely, botanists say, it was brought in as seedling from its more normal habitat farther south and planted, perhaps to honor something or someone. If so, the person or occasion honored seems to have been lost to memory.
Just possibly, too, the anonymous planter may have had in mind the perfectly reasonable purpose of making coffee. For no less an authority than the Encyclopedia Britannica notes the tree's seed were once used as a coffee substitute.
Informal experiments designed to prove the validity of this theory wound up by establishing that:
1.) Either the art of brewing coffee from Kentucky coffee tree beans died with the old-timers.
2) Or the pioneer palate was considerably more durable than the modern digestive system. Flowers In Spring
The seeds preceded in the Spring by handsome white flowers, grow in leathery pods about six inches long. Inside are five or six large, hard, dark brown beans about the size of lima beans, embedded in red pulp:
Ground and brewed, the beans produced in one experiment, at least--a muddy, 'vile-smelling, and worse-tasting compound that bore no provable relationship to coffee --not even to a bride's first batch.
The courthouse tree produced few, if any, pods this year, indicating it may be past its prime. Its foliage, however, is healthy enough and shows no signs of dying.
Local tree-lovers are a bit fearful that, if the county fathers ever get around to providing a new Courthouse, the tree may not be spared. They hope efforts will let be made to let it stand or at least to move it elsewhere.
Meanwhile, maybe someone will come forward with the answer as to why it is there.