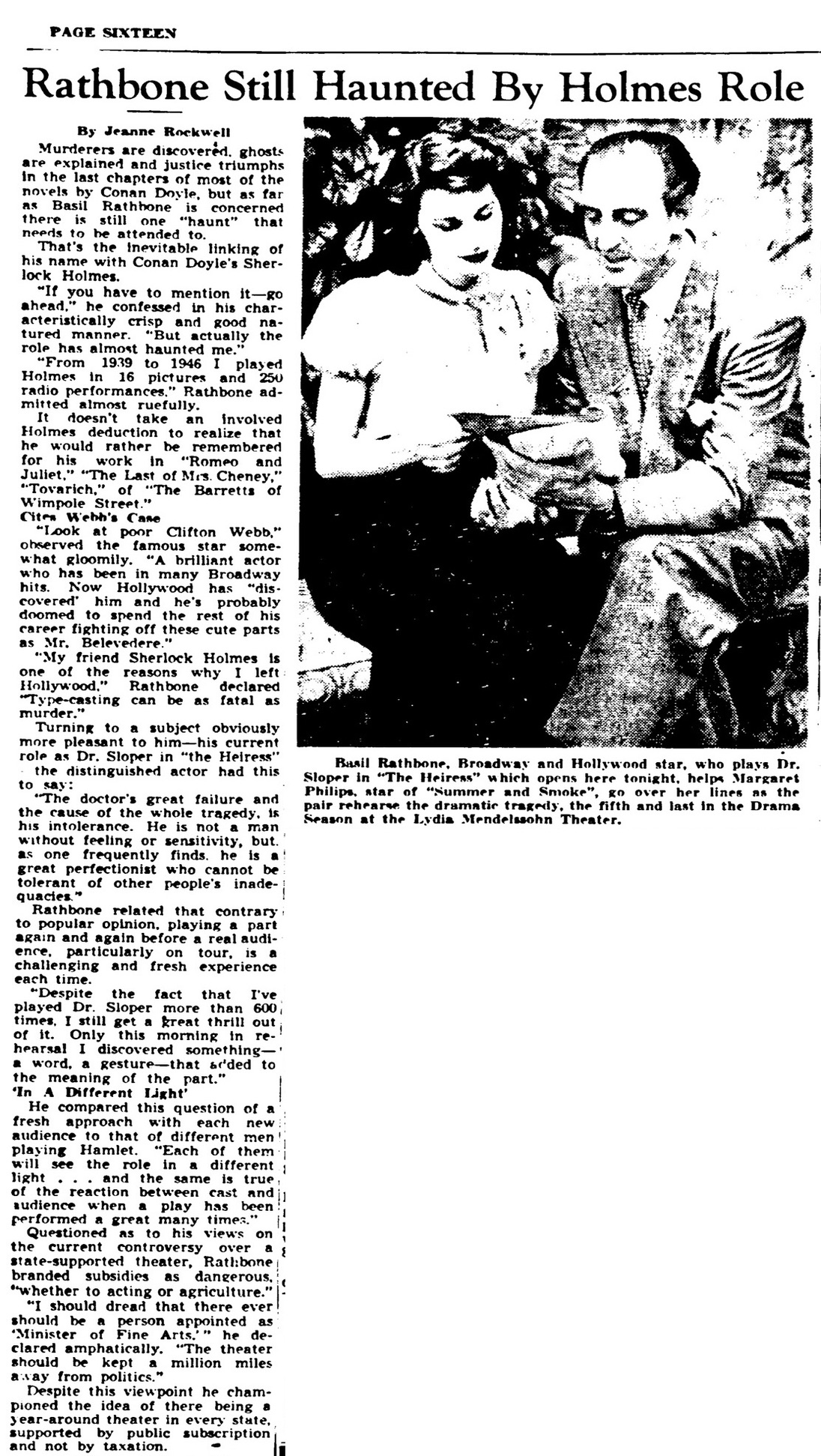 Murderers are discovered, ghosts are explained and justice triumphs In the last chapters of most of the novels by Conan Doyle, but as far as Basil Rathbone is concerned there is still one "haunt” that needs to be attended to.

That’s the Inevitable linking of his name with Conan Doyle’s Sherlock Holmes.

“If you have to mention it—go ahead,” he confessed in his characteristically crisp and good natured manner. "But actually the role has almost haunted me.”

It doesn't take an involved Holmes deduction to realize that he would rather be remembered for his work in "Romeo and Juliet,” "The Last of Mrs. Cheney,” "Tovarich,” of "The Barretts of Wimpole Street.”

“Look at poor Clifton Webb,” observed the famous star somewhat gloomily. "A brilliant actor who has been in many Broadway hits. Now Hollywood has “discovered’ him and he’s probably doomed to spend the rest of his career fighting off these cute parts as Mr. Belevedere.”

"My friend Sherlock Holmes Is one of the reasons why I left Hollywood,” Rathbone declared. “Type-casting can be as fatal as murder.”

Turning to a subject obviously more pleasant to him—his current role as Dr. Sloper in “the Heiress” the distinguished actor had this to say:

"The doctor's great failure and the cause of the whole tragedy, is his intolerance. He is not a man without feeling or sensitivity, but as one frequently finds, he is a great perfectionist who cannot be tolerant of other people's inadequacies.”

Rathbone related that contrary to popular opinion, playing a part again and again before a real audience, particularly on tour, is a challenging and fresh experience each time.

"Despite the fact that I've played Dr. Sloper more than 600 times, I still get a great thrill out of it. Only this morning in rehearsal I discovered something—a word, a gesture—that added to the meaning of the part.”

'In A Different Light'

He compared this question of a fresh approach with each new audience to that of different men playing Hamlet. "Each of them will see the role in a different light...and the same is true of the reaction between cast and audience when a play has been performed a great many times."

Questioned as to his views on the current controversy over a state-supported theater, Rathbone branded subsidies as dangerous, “whether to acting or agriculture.”

"I should dread that there ever should be a person appointed as ‘Minister of Fine Arts,’” he declared amphatically. "The theater should be kept a million miles a away from politics.”

Despite this viewpoint he championed the idea of there being a year-around theater in every state, supported by public subscription and not by taxation.

Basil Rathbone, Broadway and Hollywood star, who plays Dr. Sloper in "The Heiress” which opens here tonight, helps Margaret Philips, star of “Summer and Smoke”, go over her lines as the pair rehearse the dramatic tragedy, the fifth and last In the Drama Season at the Lydia Mendelssohn Theater.