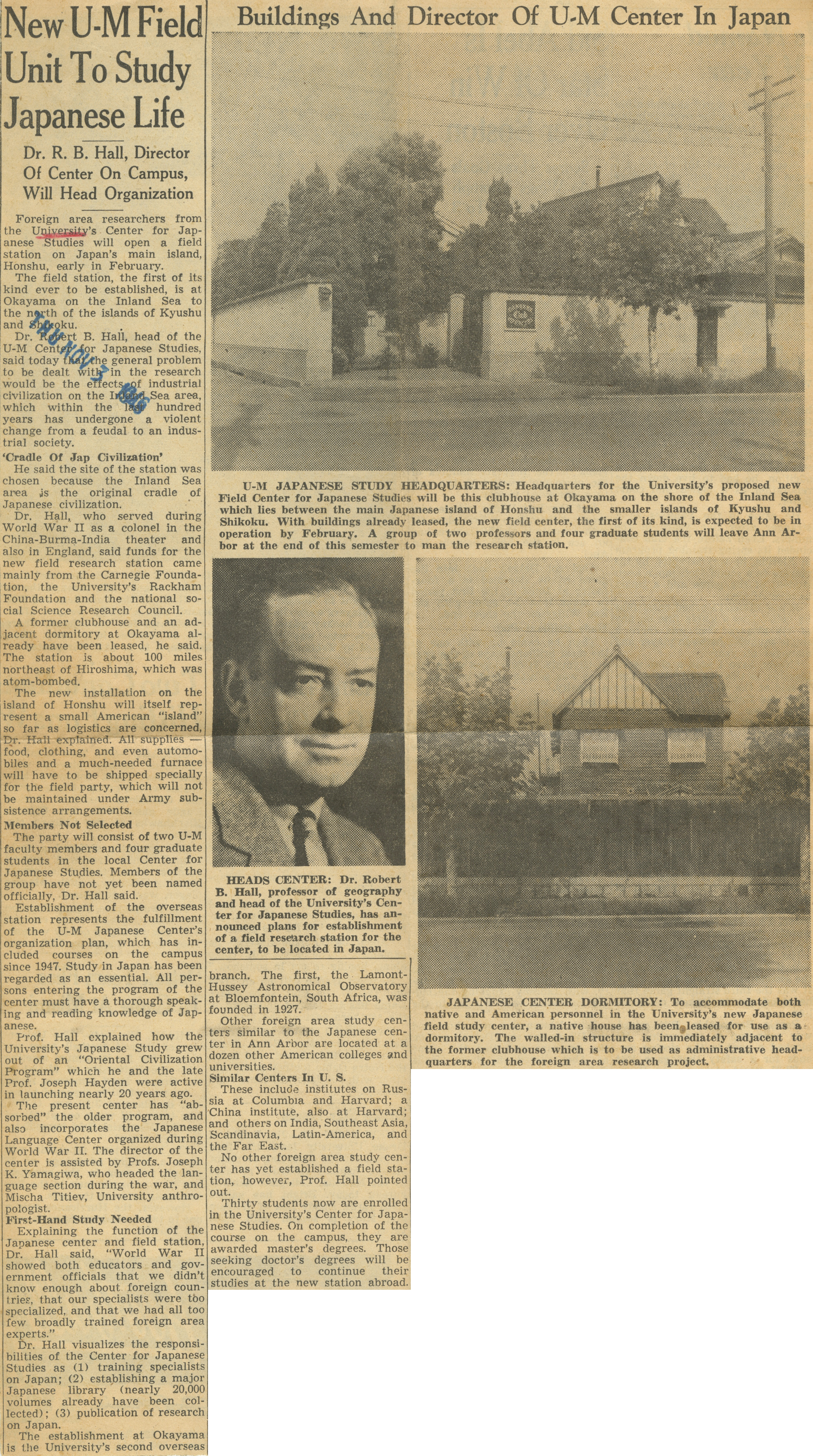 Dr. R. B. Hall, Director Of Center On Campus, Will Head Organization

Foreign area researchers from the University’s Center for Japanese Studies will open a field station on Japan's main island, Honshu, early in February.

The field station, the first of its kind ever to be established, is at Okayama on the Inland Sea to the north of the islands of Kyushu and Shikoku.

Dr. Robert B. Hall, head of the U-M Center for Japanese Studies, said today that the general problem to be dealt within would be the effect of industrial civilization on the Inland Sea area, which within the hundred years has undergone a change from a feudal to an industrial society.

He said the site of the station was chosen because the Inland Sea area is the original cradle of Japanese civilization.

Dr. Hall, who served during World War II as a colonel in the China-Burma-India theater and also in England, said funds for the new field research station came mainly from the Carnegie Foundation, the University’s Rackham Foundation and the national social Science Research Council.

A former clubhouse and an adjacent dormitory at Okayama already have been leased, he said. The station is about 100 miles northeast of Hiroshima, which was atom-bombed.

The new installation on the island of Honshu will itself represent a small American "island” so far as logistics are concerned, Dr. Hall explained. All supplies — food, clothing, and even automobiles and a much-needed furnace will have to be shipped specially for the field party, which will not be maintained under Army subsistence arrangements.

The party will consist of two U-M faculty members and four graduate students in the local Center for Japanese Studies. Members of the group have not yet been named officially, Dr. Hall said.

Establishment of the overseas station represents the fulfillment of the U-M Japanese Center’s organization plan, which has included courses on the campus since 1947. Study in Japan has been regarded as an essential. All persons entering the program of the center must have a thorough speaking and reading knowledge of Japanese.

Prof. Hall explained how the University’s Japanese Study grew out of an "Oriental Civilization Program” which he and the late Prof. Joseph Hayden were active in launching nearly 20 years ago.

The present center has “absorbed” the older program, and also incorporates the Japanese Language Center organized during World War II. The director of the center is assisted by Profs. Joseph K. Yamagiwa, who headed the language section during the war, and Mischa Titiev, University anthropologist.

Explaining the function of the Japanese center and field station, Dr. Hall said, "World War II showed both educators and government officials that we didn't know enough about foreign countries, that our specialists were too specialized, and that we had all too few broadly trained foreign area experts."

Dr. Hall visualizes the responsibilities of the Center for Japanese Studies as (1) training specialists on Japan; (2) establishing a major Japanese library (nearly 20,000 volumes already have been collected); (3) publication of research on Japan.

The establishment at Okayama is the University’s second overseas branch. The first, the Lamont-Hussey Astronomical Observatory at Bloemfontein, South Africa, was founded in 1927.

Other foreign area study centers similar to the Japanese center in Ann Arbor are located at a dozen other American colleges and universities.

Similar Centers In U. S.

These include institutes on Russia at Columbia and Harvard; a China institute, also at Harvard; and others on India, Southeast Asia, Scandinavia, Latin-America, and the Far East.

No other foreign area study center has yet established a field station, however, Prof. Hall pointed out.

Thirty students now are enrolled in the University's Center for Japanese Studies. On completion of the course on the campus, they are awarded master’s degrees. Those seeking doctor’s degrees will be encouraged to continue their studies at the new station abroad.

Buildings And Director Of U-M Center In Japan

U-M JAPANESE STUDY HEADQUARTERS: Headquarters for the University’s proposed new Field Center for Japanese Studies will be this clubhouse at Okayama on the shore of the Inland Sea which lies between the main Japanese island of Honshu and the smaller islands of Kyushu and Shikoku. With buildings already leased, the new field center, the first of its kind, is expected to be in operation by February. A group of two professors and four graduate students will leave Ann Arbor at the end of this semester to man the research station.

HEADS CENTER: Dr. Robert B. Hall, professor of geography and head of the University’s Center for Japanese Studies, has announced plans for establishment of a field research station for the center, to be located in Japan.

JAPANESE CENTER DORMITORY: To accommodate both native and American personnel in the University’s new Japanese field study center, a native house has been leased for use as a dormitory. The walled-in structure is immediately adjacent to the former clubhouse which is to be used as administrative headquarters for the foreign area research project.