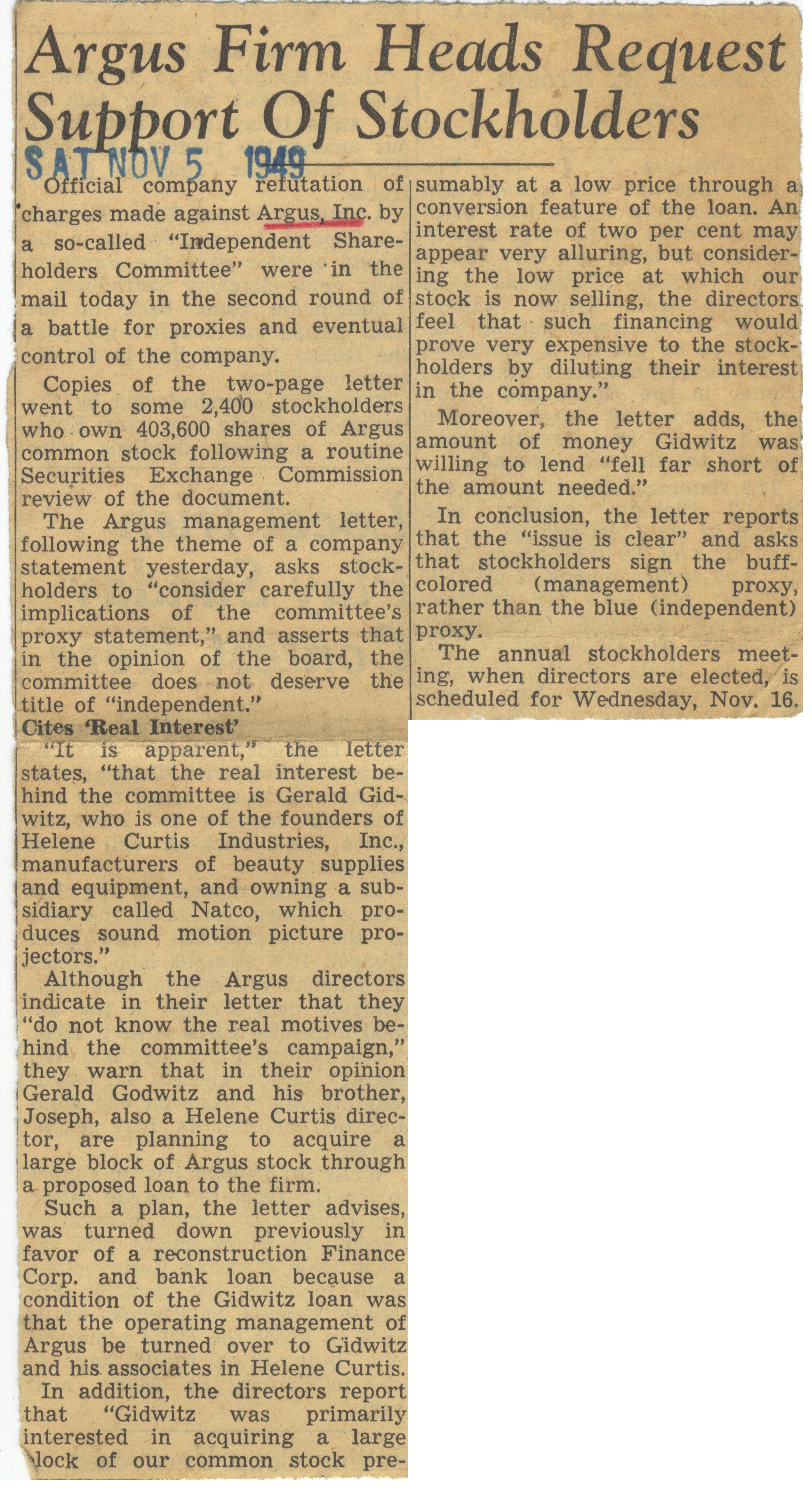 Official company refutation of sumably at a low price through a;

'charges made against Argus.Inc. by conversion feature of the loan. An

ii ri -IT ^^n^a^'chQT.Q interest rate of two per cent may
a so-called Independent Share- ^^ ^y alhiring, but consid&r-

holders Committee" were -in the ^g the low price at which our
mail today in the second round of stock is now selling, the directors
a battle for proxies and eventual feel that such financing would

" , holders by diluting their interest,
Copies of the^ ^two-page ^ letter ^ ^he company."

Moreover, the letter adds, the
amount of money Gidwitz was

;nmon stock following a routine .„. , , , „, -, , i. , ,,
,-urities Exchange Commission ^"S t0 lend ;fel,l far short of
view of the document. the amount needed."
The Argus management letter, In conclusion, the letter repm ••
n.owing the theme of a company ^at the "issue is clear" and a
itement yesterday, '(ock- tllat stockholders sign the bi
.Iders to "consider' . the colored (management) pro
plications of the committee's rather than the blue (independent/
,xy statement," and asserts that proxy.

.ii the opinion of the board, the ^t^ annual stockholders meet-
committee does not deserve the m^, when directors are elected, is
title of "independent." scheduled for Wednesday, Nov. 16.

"It is apri-'ti-ent,'* the letter
states, " " real interest be^
hind the itee is Gerald Gid-|
witz, who is one of the founders of-
Helene Curtis Industries, Inc.,
manufacturers of beauty supplies
and equipment, and owning a sub-
sidiary called Natco, which pro-

o not know the real motives be-|

'id the committee's campaign,"'
iney warn that in their opinion
Gerald Godwitz and his brother,
Joseph, also a Helene Curtis direc-
tor, are planning to acquire a
large b1ork of Argus stock through.
a propo; to the firm. |

-)-s turned down previously in1
. i.-or of a reconstruction Financed
Corp. and bank loan because a|
condition of the Gidwitz loan was
that the operating management of
Argus be turned over to Gidwitz
and his. associates in Helene Curtis.

In addition, the directors report
that "Gidwitz was primarily
interested in acquiring a large
\ock of our common stock pre-