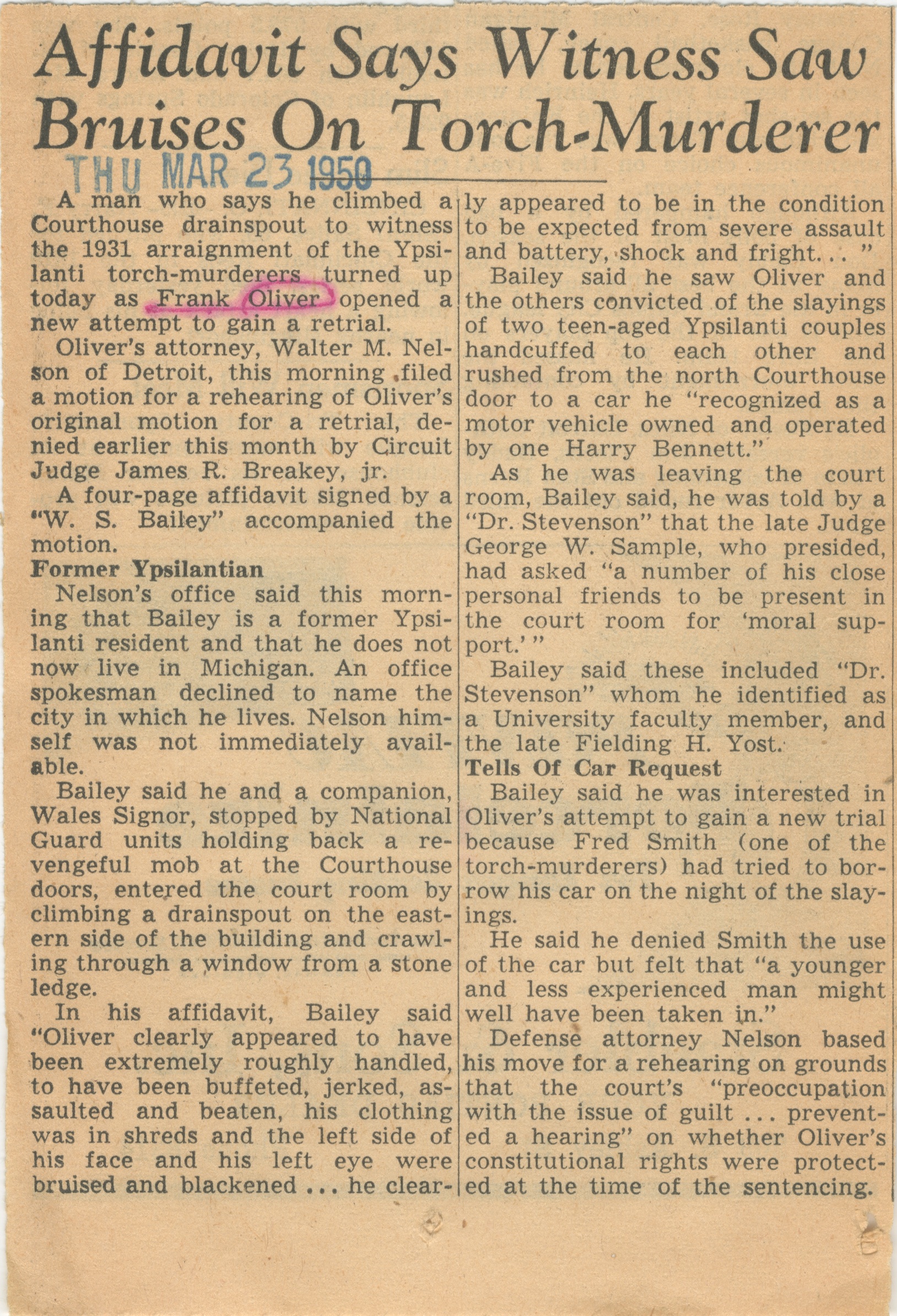 A man who says he climbed a Courthouse drainspout to witness the 1931 arraignment of the Ypsilanti torch-murderers turned up today as Frank Oliver opened a new attempt to gain a retrial.

Oliver's attorney, Walter M. Nelson of Detroit, this morning filed a motion for a rehearing of Oliver’s original motion for a retrial, denied earlier this month by Circuit Judge James R. Breakey, jr.

A four-page affidavit signed by a "W. S. Bailey" accompanied the motion.

Nelson’s office said this morning that Bailey is a former Ypsilanti resident and that he does not now live in Michigan. An office spokesman declined to name the city in which he lives. Nelson himself was not immediately available.

Bailey said he and a companion, Wales Signor, stopped by National Guard units holding back a revengeful mob at the Courthouse doors, entered the court room by climbing a drainspout on the eastern side of the building and crawling through a window from a stone ledge.

In his affidavit, Bailey said "Oliver clearly appeared to have been extremely roughly handled, to have been buffeted, jerked, assaulted and beaten, his clothing was in shreds and the left side of his face and his left eye were bruised and blackened ... he clearly appeared to be in the condition to be expected from severe assault and battery, shock and fright... ”

Bailey said he saw Oliver and the others convicted of the slayings of two teen-aged Ypsilanti couples handcuffed to each other and rushed from the north Courthouse door to a car he "recognized as a motor vehicle owned and operated by one Harry Bennett.”

As he was leaving the court room, Bailey said, he was told by a "Dr. Stevenson” that the late Judge George W. Sample, who presided, had asked "a number of his close personal friends to be present in the court room for 'moral support.’ ”

Bailey said these included “Dr. Stevenson” whom he identified as a University faculty member, and the late Fielding H. Yost.

Bailey said he was interested in Oliver’s attempt to gain a new trial because Fred Smith (one of the torch-murderers) had tried to borrow his car on the night of the slayings.

He said he denied Smith the use of the car but felt that "a younger and less experienced man might well have been taken in.”

Defense attorney Nelson based his move for a rehearing on grounds that the court's "preoccupation with the issue of guilt ... prevented a hearing" on whether Oliver’s constitutional rights were protected at the time of the sentencing.