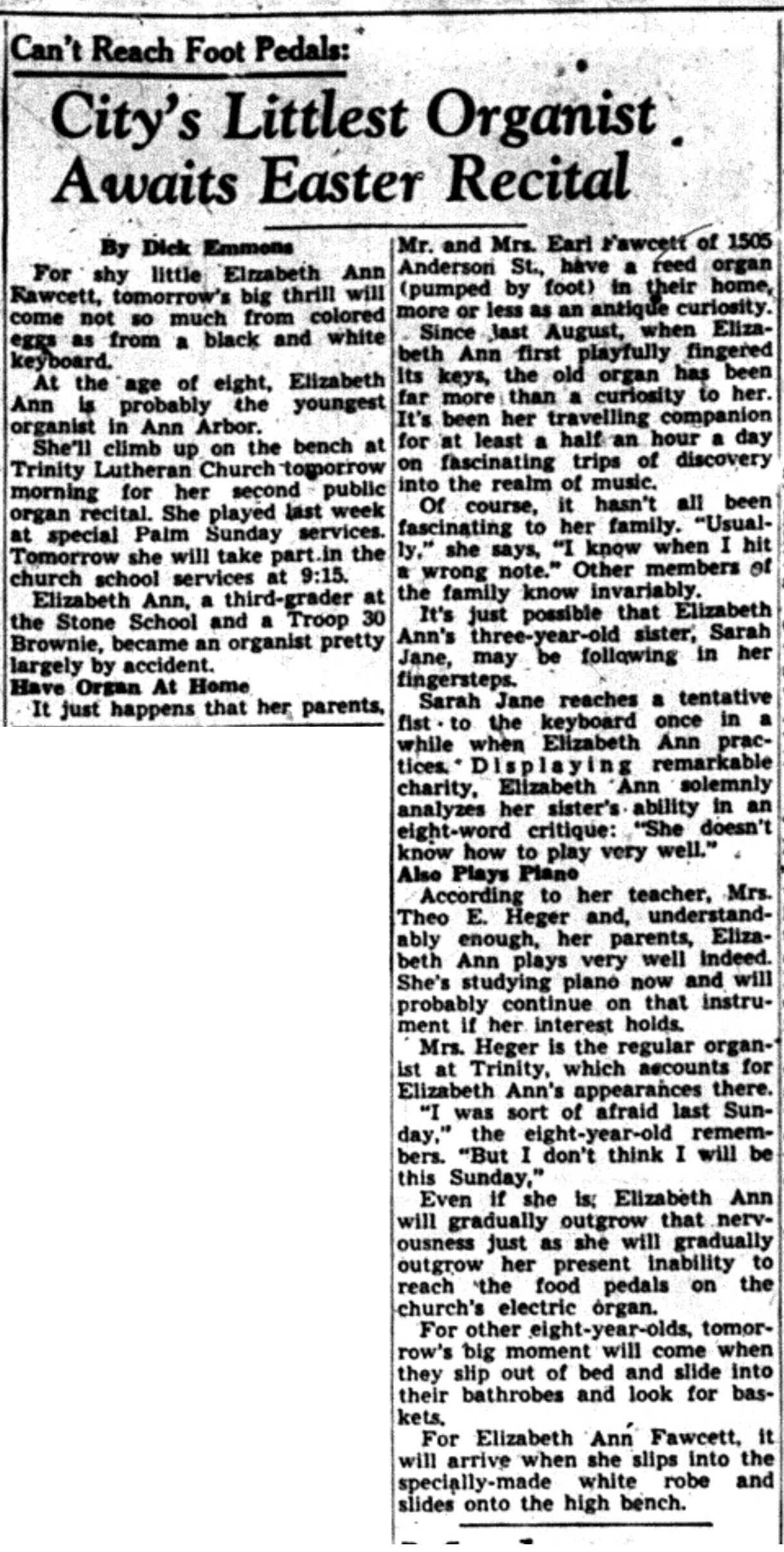 For shy little Elizabeth Ann Fawcett, tomorrow's big thrill will come not as much from colored eggs as from a black and white keyboard.

At the age of eight, Elizabeth Ann is probably the youngest organist in Ann Arbor.

She’ll climb up on the bench at Trinity Lutheran Church tomorrow morning for her second public organ recital. She played last week at special Palm Sunday services. Tomorrow she will take part in the church school services at 9:15.

Elisabeth Ann, a third-grader at the Stone School and a Troop 30 Brownie, became an organist pretty largely by accident.

Have Organ At Home

It just happens that her parents, Mr. and Mrs. Earl Fawcett of 1306 Anderson St., have a reed organ (pumped by foot) in their home, more or less as an antique curiosity.

Since last August, when Elizabeth Ann first playfully fingered its keys, the old organ has been far more than a curiosity to her. It’s been her travelling companion for at least a half an hour a day on fascinating trips of discovery into the realm of music.

Of course, it hasn’t all been fascinating to her family. “Usually.” she says, I know when I hit a wrong note.” Other members of the family know invariably.

It’s just possible that Elisabeth Ann’s three-year-old sister, Sarah Jane, may be following in her fingersteps.

Sarah Jane reaches a tentative fist to the keyboard once in a while when Elizabeth Ann practices. Displaying remarkable charity, Elisabeth Ann solemnly analyses her sister's ability in an eight-word critique: “She doesn't know how to play very well”

According to her teacher, Mr. Theo E. Heger and, understandably enough, her parents, Elizabeth Ann plays very well indeed. She's studying piano now and will probably continue on that instrument if her interest holds.

Mrs. Heger is the regular organist at Trinity, which accounts for Elizabeth Ann’s appearances there.

“I was sort of afraid last Sunday,” the eight-year-old remembers. “But I don’t think I will be this Sunday,”

For other eight-year-olds, tomorrow’s big moment will come when they slip out of bed and slide into their bathrobes and look for baskets.

For Elizabeth Ann Fawcett, it will arrive when she slips into the specially-made white robe and slides onto the high bench.