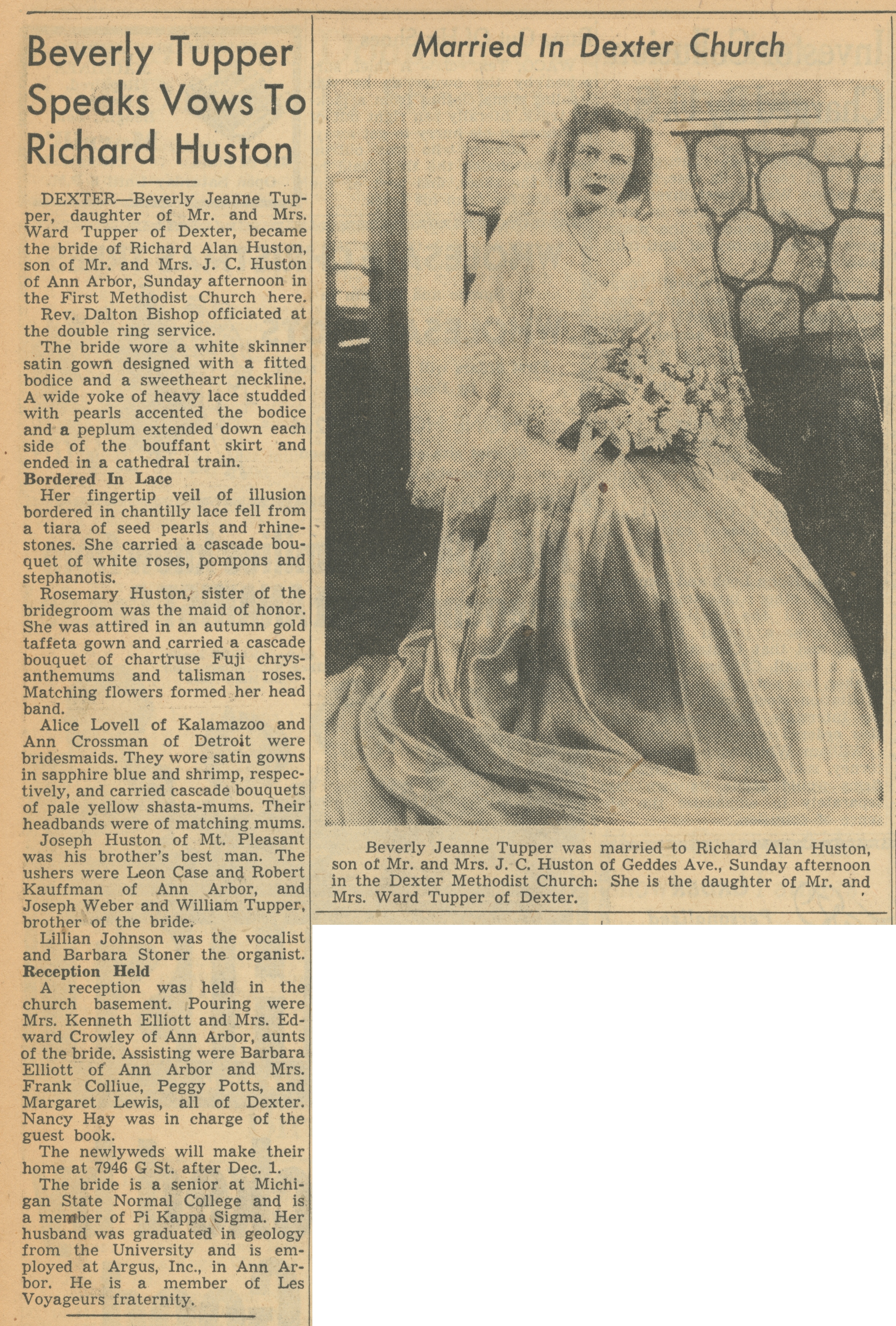 DEXTER—Beverly Jeanne Tupper, daughter of Mr. and Mrs. Ward Tupper of Dexter, became the bride of Richard Alan Huston of Ann Arbor, Sunday afternoon in the First Methodist Church here.
Rev. Dalton Bishop officiated at the double ring service.
The bride wore a white skinner satin gown designed with a fitted bodice and a sweetheart neckline. A wide yoke of heavy lace studded with pearls accented the bodice and a peplum extended down each side of the bouffant skirt and ended in a cathedral train.
Bordered In Lace
Her fingertip veil of illusion bordered in Chantilly lace fell from a tiara of seed pearls and rhinestones. She carried a cascade bouquet of white roses, pompons and stephanotis.
Rosemary Huston, sister of the bridegroom was the maid of honor. She was attired in an autumn gold taffeta gown and carried a cascade bouquet of chartruse Fuji chrysanthemums and talisman roses. Matching flowers formed her head band.
Alice Lovell of Kalamazoo and Ann Crossman of Detroit were bridesmaids. They wore satin gowns in sapphire blue and shrimp, respectively, and carried cascade bouquets of pale yellow Shasta-mums. Their headbands were of matching mums.
Joseph Huston of Mt. Pleasant was his brother’s best man. The ushers were Leon Case and Robert Kauffman of Ann Arbor, and Joseph Weber and William Tupper, brother of the bride.
Lillian Johnson was the vocalist and Barbara Stoner the organist.
Reception Held
A reception was held in the church basement. Pouring were Mrs. Kenneth Elliott and Mrs. Edward Crowley of Ann Arbor, aunts of the bride. Assisting were Barbara Elliott of Ann Arbor and Mrs. Frank Colliue, Peggy Potts, and Margaret Lewis, all of Dexter. Nancy Hay was in charge of the guest book.
The newlyweds will make their home at 7946 G St. after Dec. 1.
The bride is a senior at Michigan State Normal College and is a member of Pi Kappa Sigma. Her husband was graduated in geology from the University and is employed at Argus, Inc., in Ann Arbor. He is a member of Les Voyageurs fraternity.

IMAGE TEXT: MARRIED IN DEXTER CHURCH: Beverly Jeanne Tupper was married to Richard Alan Huston, son of Mr. and Mrs. J. C. Huston of Geddes Ave., Sunday afternoon in the Dexter Methodist Church. She is the daughter of Mr. and Mrs. Ward Tupper of Dexter.