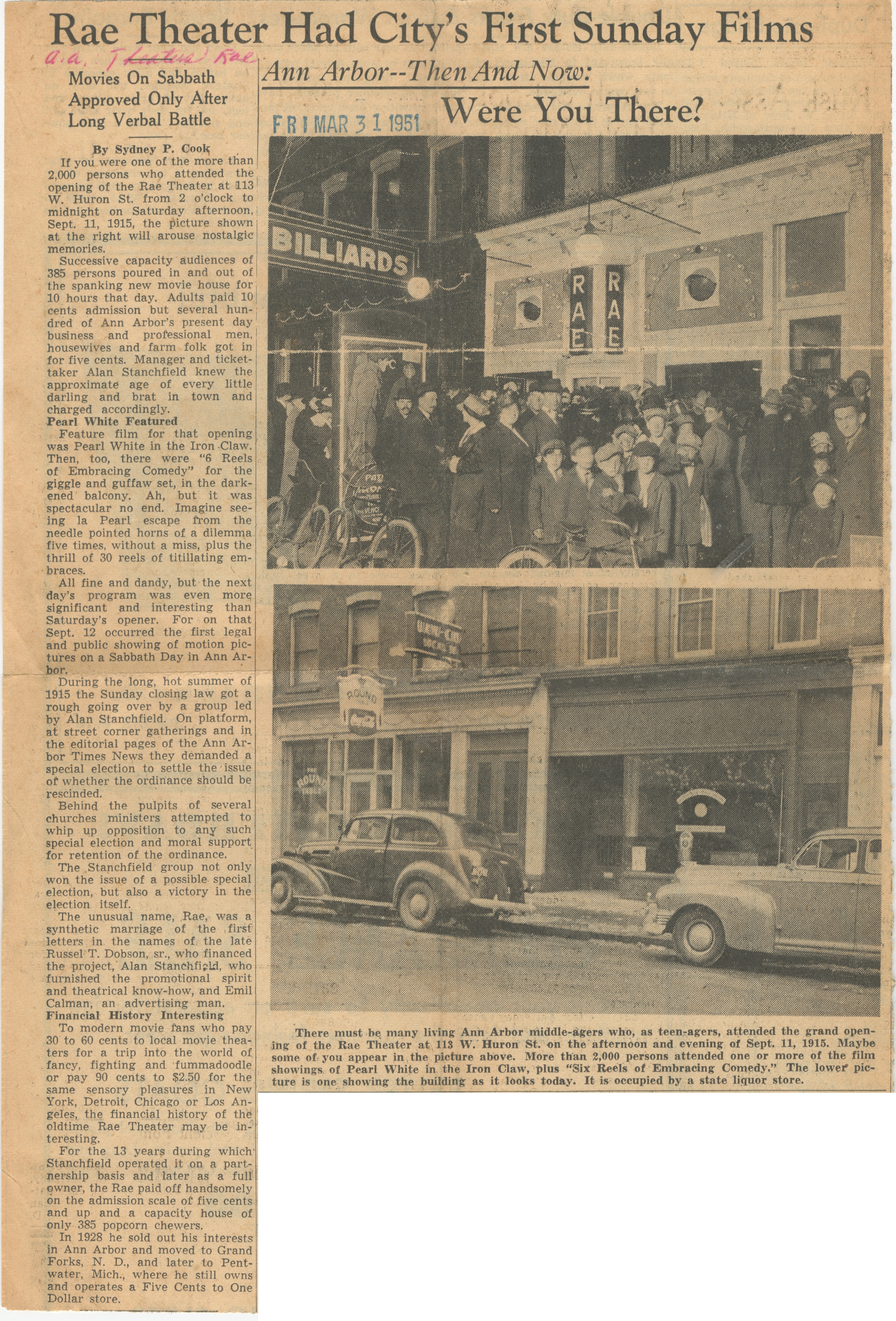 A Movies On Sabbath

Approved Only After Long Verbal Battle

If you were one of the more than 2,000 persons who attended the opening of the Rae Theater at 113 W. Huron St. from 2 o'clock to midnight on Saturday afternoon. Sept. 11, 1915, the picture shown at the right will arouse nostalgic memories.

Successive capacity audiences of 385 persons poured in and out of the spanking new movie house for 10 hours that day. Adults paid 10 cents admission but several hundred of Ann Arbor's present day business and professional men, housewives and farm folk got in for five cents. Manager and ticket-taker Alan Stanchfield knew the approximate age of every little darling and brat in town and charged accordingly.

Feature film for that opening was Pearl White in the Iron Claw. Then, too, there were “6 Reels of Embracing Comedy” for the giggle and guffaw set, in the darkened balcony. Ah, but it was spectacular no end. Imagine seeing la Pearl escape from the needle pointed horns of a dilemma five times, without a miss, plus the thrill of 30 reels of titillating embraces.

All fine and dandy, but the next day’s program was even more significant and interesting than Saturday’s opener. For on that Sept. 12 occurred the first legal and public showing of motion pictures on a Sabbath Day in Ann Arbor.

During the long, hot summer of 1915 the Sunday closing law got a rough going over by a group led by Alan Stanchfield. On platform, at street corner gatherings and in the editorial pages of the Ann Arbor Times News they demanded a special election to settle the issue of whether the ordinance should be rescinded.

Behind the pulpits of several churches ministers attempted to whip up opposition to any such special election and moral support for retention of the ordinance.

The Stanchfield group not only won the issue of a possible special election, but also a victory in the election itself.

The unusual name, Rae, was a synthetic marriage of the first letters in the names of the late Russel T. Dobson, sr., who financed the project, Alan Stanchfield, who furnished the promotional spirit and theatrical know-how, and Emil Caiman, an advertising man.

To modern movie fans who pay 30 to 60 cents to local movie theaters for a trip into the world of fancy, fighting and fummadoodle or pay 90 cents to $2.50 for the same sensory pleasures in New York, Detroit, Chicago or Los Angeles, the financial history of the old time Rae Theater may be interesting.

For the 13 years during which Stanchfield operated it on a partnership basis and later as a full owner, the Rae paid off handsomely on the admission scale of five cents and up and a capacity house of only 385 popcorn chewers.

In 1928 he sold out his interests in Ann Arbor and moved to Grand Forks, N. D., and later to Pentwater, Mich., where he still owns and operates a Five Cents to One Dollar store.

There must he many living Ann Arbor middle-ager who, as teen-ager, attended the grand opening of the Rae Theater at 113 W. Huron St. on the afternoon and evening of Sept. 11, 1915. Maybe some of you appear in the picture above. More than 2.000 person attended one or more of the film showings of Pearl White in the Iron Claw, plus "Six Reel of Embracing Comedy." The lower picture is one showing the building as it looks today. It is occupied by a state liquor store.