Idea-Collecting Pays Off In Dobson Home 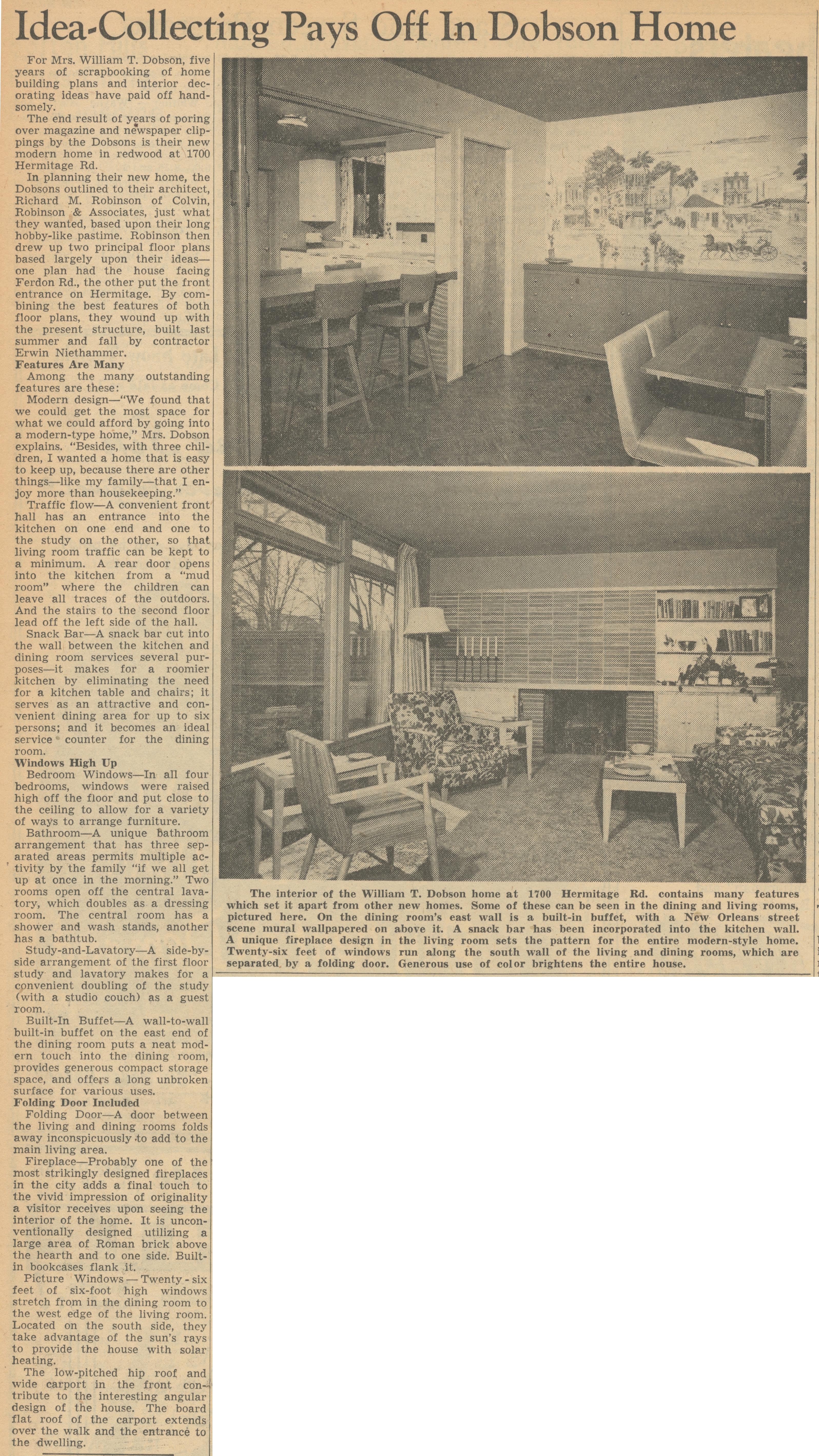 ﻿Idea-Collecting Pays Off In Dobson Home

The end result of years of poring over magazine and newspaper clippings by the Dobsons is their new modern home in redwood at 1700 Hermitage Rd.

In planning their new home, the Dobsons outlined to their architect, Richard M. Robinson of Colvin, Robinson & Associates, just what they wanted, based upon their long hobby-like pastime. Robinson then drew up two principal floor plans based largely upon their ideas— one plan had the house facing Ferdon Rd., the other put the front entrance on Hermitage. By combining the best features of both floor plans, they wound up with the present structure, built last summer and fall by contractor Erwin Niethammer.

Among the many outstanding features are these:

Modern design—“We found that we could get the most space for what we could afford by going into a modern-type home,” Mrs. Dobson explains. “Besides, with three children, I wanted a home that is easy to keep up, because there are other things—like my family—that I enjoy more than housekeeping.”

Traffic flow—A convenient front hall has an entrance into the kitchen on one end and one to the study on the other, so that living room traffic can be kept to a minimum. A rear door opens into the kitchen from a “mud room” where the children can leave all traces of the outdoors. And the stairs to the second floor lead off the left side of the hall.

Snack Bar—A snack bar cut into the wall between the kitchen and dining room services several purposes—it makes for a roomier kitchen by eliminating the need for a kitchen table and chairs: it serves as an attractive and convenient dining area for up to six persons; and it becomes an ideal service counter for the dining room.

Bedroom Windows—In all four bedrooms, windows were raised high off the floor and put close to the ceiling to allow for a variety of ways to arrange furniture.

Bathroom—A unique Bathroom arrangement that has three separated areas permits multiple activity by the family "if we all get up at once in the morning.” Two rooms open off the central lavatory, which doubles as a dressing room. The central room has a shower and wash stands, another has a bathtub.

Study-and-Lavatory—A side-by-side arrangement of the first floor study and lavatory makes for a convenient doubling of the study (with a studio couch) as a guest room.

Folding Door—A door between the living and dining rooms folds away inconspicuously -to add to the main living area.

Fireplace—Probably one of the most strikingly designed fireplaces in the city adds a final touch to the vivid impression of originality a visitor receives upon seeing the interior of the home. It is unconventionally designed utilizing a large area of Roman brick above the hearth and to one side. Built-in bookcases flank it.

Picture Windows — Twenty-six feet of six-foot high windows stretch from in the dining room to the west edge of the living room. Located on the south side, they take advantage of the sun's rays to provide the house with solar heating.

The low-pitched hip roof and wide carport in the front contribute to the interesting angular design of the house. The board flat roof of the carport extends over the walk and the entrance to the dwelling.

The interior of the William T. Dobson home at 1700 Hermitage Rd. contains many features which set it apart from other new homes. Some of these can be seen in the dining and living rooms, pictured here. On the dining room's east wall is a built-in buffet, with a New Orleans street scene mural wallpapered on above it. A snack bar has been incorporated into the kitchen wall. A unique fireplace design in the living room sets the pattern for the entire modern-style home. Twenty-six feet of windows run along the south wall of the living and dining rooms, which are separated by a folding door. Generous use of color brightens the entire house.