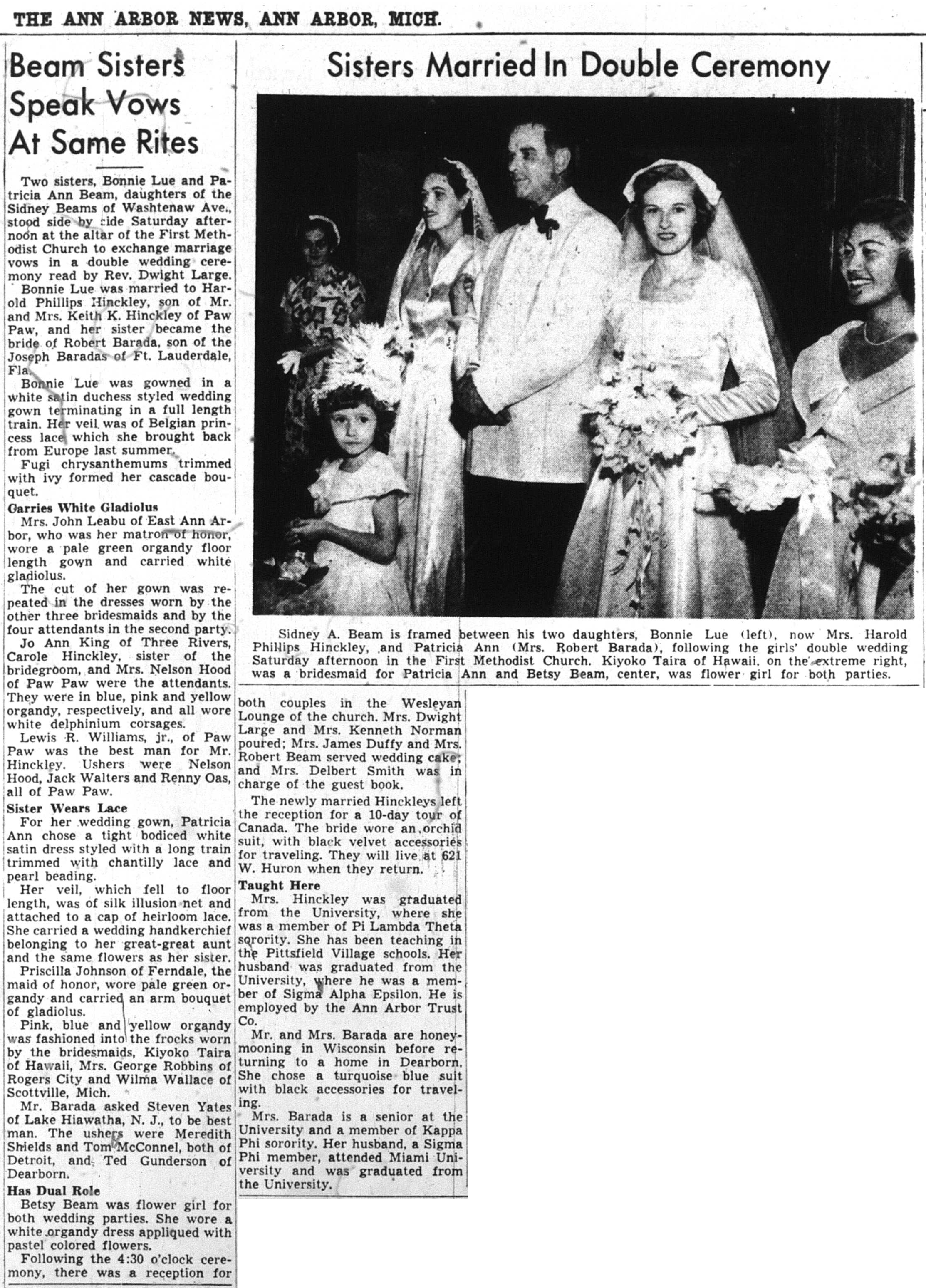 Two sisters, Bonnie Lue and Patricia Ann Beam, daughters of the Sidney Beams of Washtenaw Ave., stood side by side Saturday afternoon at the altar of the First Methodist Church to exchange marriage vows in a double wedding ceremony read by Rev. Dwight Large.

J Bonnie Lue was married to Harold Phillips Hinckley, son of Mr. and Mrs. Keith K. Hinckley of Paw Paw, and her sister became the bride of Robert Barada. son of the Joseph Baradas of Ft. Lauderdale, Fla.

Bonnie Lue was gowned in a white satin duchess styled wedding gown terminating in a full length train. Her veil was of Belgian princess lace which she brought back from Europe last summer.

The cut of her gown was repeated in the dresses worn by the other three bridesmaids and by the four attendants in the second party.

Jo Ann King of Three Rivers, Carole Hinckley, sister of thej bridegroom, and Mrs. Nelson Hood of Paw Paw were the attendants. They were in blue, pink and yellow organdy, respectively, and all wore white delphinium corsages.

Her veil, which fell to floor length, was of silk illusion net and attached to a cap of heirloom lace. She carried a wedding handkerchief belonging to her great-great aunt and the same flowers as her sister.

Priscilla Johnson of Ferndale, the maid of honor, wore pale green organdy and carried an arm bouquet of gladiolus.

Pink, blue and yellow organdy was fashioned into the frocks worn by the bridesmaids, Kiyoko Taira of Hawaii, Mrs. George Robbins of Rogers City and Wilma Wallace of Scottville, Mich.

Mr. Barada asked Steven Yates of Lake Hiawatha, N. J., to be best man. The ushers were Meredith Shields and Tom McConnel, both of Detroit, and- Ted Gunderson of Dearborn.

Betsy Beam was flower girl for both wedding parties. She wore a white organdy dress appliqued with pastel colored flowers.

Following the 4:30 o’clock ceremony, there was a reception for both couples in the Wesleyan Lounge of the church. Mrs. Dwight Large and Mrs. Kenneth Norman poured; Mrs. James Duffy and Mrs. Robert Beam served wedding cake, and Mrs. Delbert Smith was in charge of the guest book.

The newly married Hinckleys left the reception for a 10-day tour of Canada. The bride wore an,orchid suit, with black velvet accessories for traveling. They will live at 621 W. Huron when they return.

Mr. and Mrs. Barada are honeymooning in Wisconsin before returning to a home in Dearborn. She chose a turquoise blue suit with black accessories for traveling.

Sidney A. Beam is framed between his two daughters, Bonnie Lue (left), now Mrs. Harold Phillips Hinckley, and Patricia Ann (Mrs. Robert Barada), following the girls’ double wedding Saturday afternoon in the First Methodist Church. Kiyoko Taira of Hawaii, on the extreme right, was a bridesmaid for Patricia Ann and Betsy Beam, center, was flower girl for both parties.