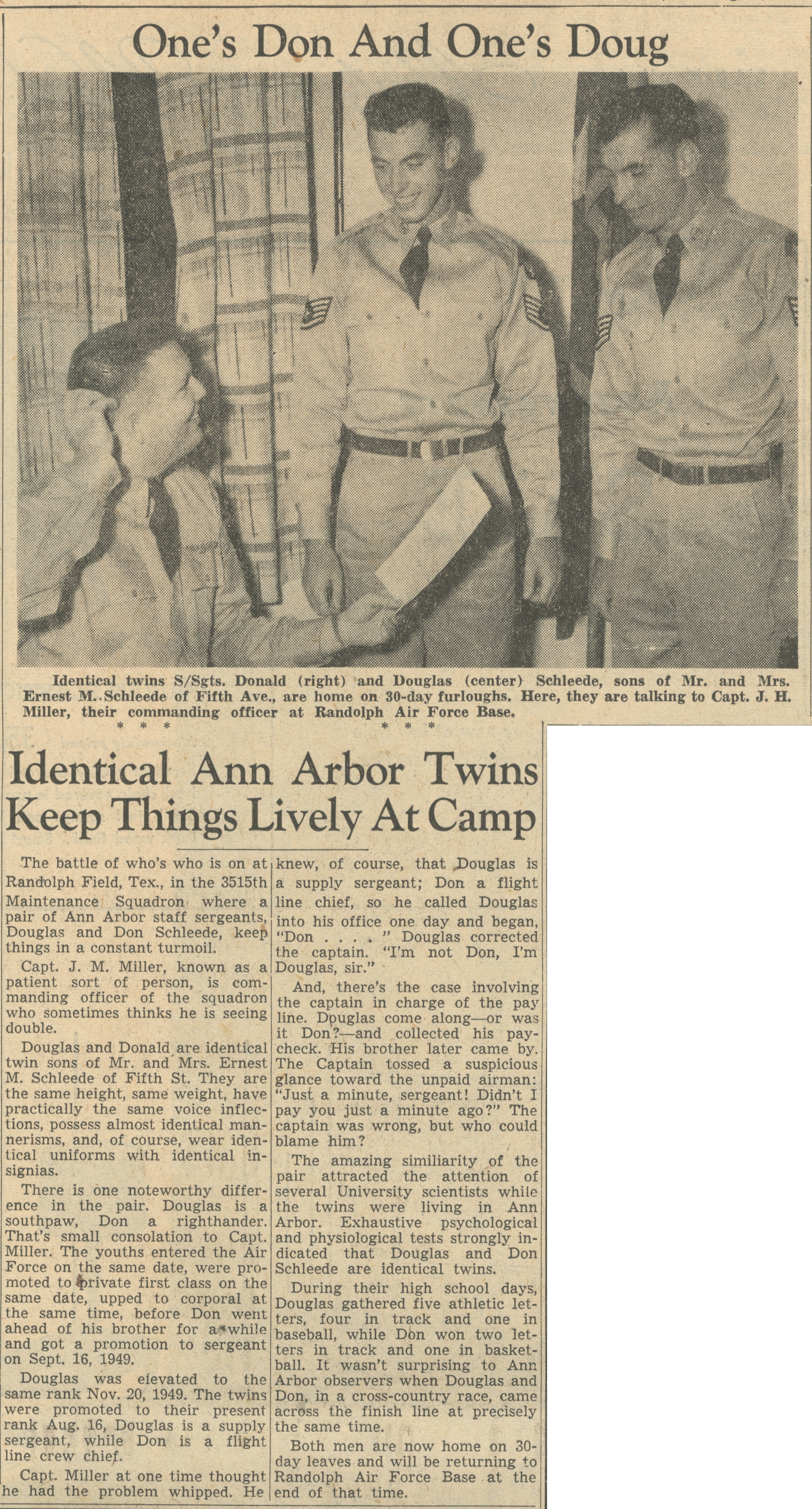 The battle of who’s who is on at Randolph Field, Tex., in the 3515th Maintenance Squadron where a pair of Ann Arbor staff sergeants, Douglas and Don Schleede, keep things in a constant turmoil.

Capt. J. M. Miller, known as a patient sort of person, is commanding officer of the squadron who sometimes thinks he is seeing double.

Douglas and Donald are identical twin sons of Mr. and Mrs. Ernest M. Schleede of Fifth St. They are the same height, same weight, have practically the same voice inflections, possess almost identical mannerisms, and, of course, wear identical uniforms with identical insignias.

There is one noteworthy difference in the pair. Douglas is a southpaw, Don a righthander. That's small consolation to Capt. Miller. The youths entered the Air Force on the same date, were promoted to private first class on the same date, upped to corporal at the same time, before Don went ahead of his brother for awhile and got a promotion to sergeant on Sept. 16, 1949.

Douglas was elevated to the same rank Nov. 20, 1949. The twins were promoted to their present rank Aug. 16, Douglas is a supply sergeant, while Don is a flight line crew chief.

Capt. Miller at one time thought he had the problem whipped. He knew, of course, that Douglas is a supply sergeant; Don a flight line chief, so he called Douglas into his office one day and began, “Don . . . . ” Douglas corrected the captain. “I’m not Don, I’m Douglas, sir.’’

And, there’s the case involving the captain in charge of the pay line. Douglas come along—or was it Don?—and collected his pay-check. His brother later came by. The Captain tossed a suspicious glance toward the unpaid airman: “Just a minute, sergeant! Didn’t I pay you just a minute ago?” The captain was wrong, but who could blame him?

The amazing similarity of the pair attracted the attention of several University scientists while the twins were living in Ann Arbor. Exhaustive psychological and physiological tests strongly indicated that Douglas and Don Schleede are identical twins.

During their high school days, Douglas gathered five athletic letters, four in track and one in baseball, while Don won two letters in track and one in basketball. It wasn’t surprising to Ann Arbor observers when Douglas and Don, in a cross-country race, came across the finish line at precisely the same time.

Both men are now home on 30-day leaves and will be returning to Randolph Air Force Base at the end of that time.