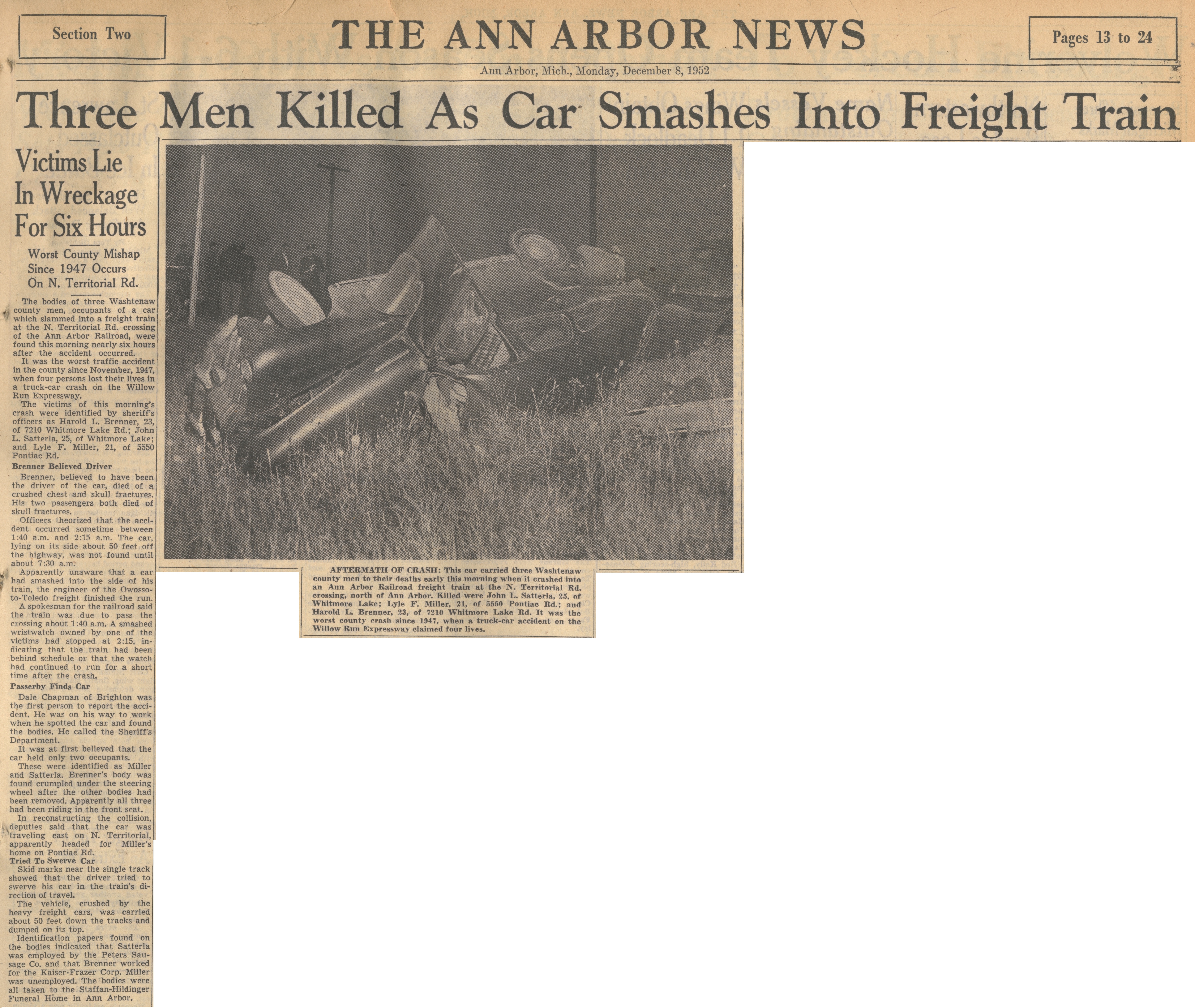 The bodies of three Washtenaw county men, occupants of a car which slammed into a freight train at the N. Territorial Rd. crossing of the Ann Arbor Railroad, were found this morning nearly six hours after the accident occurred.

It was the worst traffic accident in the county since November, 1947, when four persons lost their lives in a truck-car crash on the Willow Run Expressway.

Officers theorized that the accident occurred sometime between 1:40 a.m. and 2:15 a.m. The car. lying on its side about 50 feet off the highway, was not found until about 7:30 a.m.

Apparently unaware that a car had smashed into the side of his train, the engineer of the Owosso-to-Toledo freight finished the run.

A spokesman for the railroad said the train was due to pass the crossing about 1:40 a.m. A smashed wristwatch owned by one of the victims had stopped at 2:15, indicating that the train had been behind schedule or that the watch had continued to run for a short time after the crash.

Dale Chapman of Brighton was the first person to report the accident. He was on his way to work when he spotted the car and found the bodies. He called the Sheriff’s Department.

It was at first believed that the car held only two occupants.

These were identified as Miller and Satterla. Brenner's body was found crumpled under the steering wheel after the other bodies had been removed. Apparently all three had been riding in the front seat.

In reconstructing the collision, deputies said that the car was traveling east on N. Territorial, apparently headed for Miller's home on Pontiac Rd.

Skid marks near the single track showed that the driver tried to swerve his car in the train’s direction of travel.

The vehicle, crushed by the heavy freight cars, was carried about 50 feet down the tracks and dumped on its top.

Identification papers found on the bodies indicated that Satterla was employed by the Peters Sausage Co. and that Brenner worked for the Kaiser-Frazer Corp. Miller was unemployed. The bodies were all taken to the Staffan-Hildinger Funeral Home in Ann Arbor.