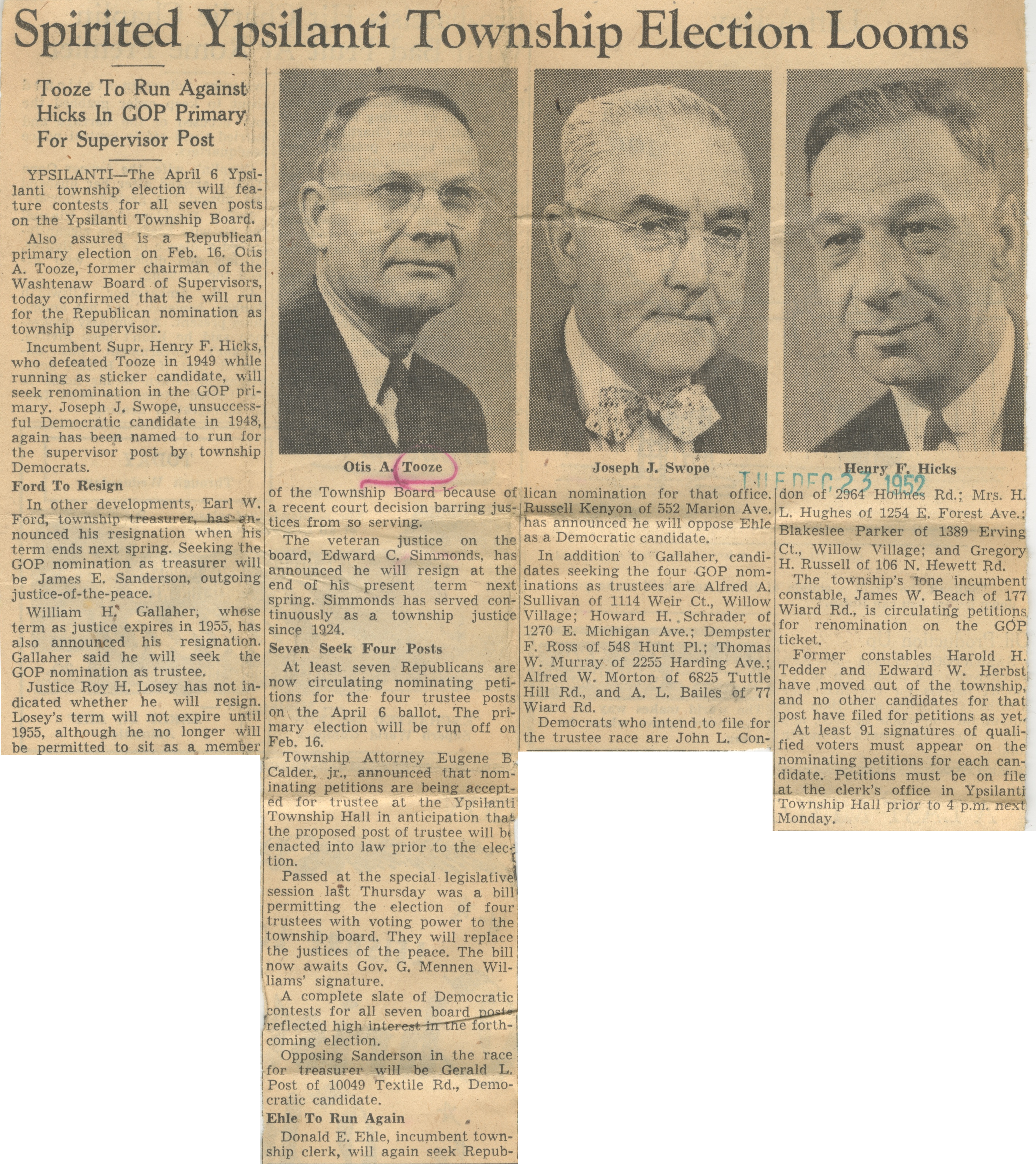 Tooze To Run Against Hicks In GOP Primary For Supervisor Post

YPSILANTI—The April 6 Ypsilanti township election will feature contests for all seven posts on the Ypsilanti Township Board.

Also assured is a Republican primary election on Feb. 16. Oiis A. Tooze, former chairman of the Washtenaw Board of Supervisors, today confirmed that he will run for the Republican nomination as township supervisor.

Incumbent Supr. Henry F. Hicks, who defeated Tooze in 1949 while running as sticker candidate, will seek renomination in the GOP primary. Joseph J. Swope, unsuccessful Democratic candidate in 1948, again has been named to run for the supervisor post by township Democrats.

In other developments, Earl W. Ford, township treasurer, has an-nounced his resignation when his term ends next spring. Seeking the GOP nomination as treasurer will be James E. Sanderson, outgoing justice-of-the-peace.

William H. Gallaher, whose term as justice expires in 1955, has also announced his resignation. Gallaher said he will seek the GOP nomination as trustee.

Justice Roy H. Losey has not indicated whether he will resign. Losey’s term will not expire until 1955, although he no longer will be permitted to sit as a, member of the Township Board because of a recent court decision barring justices from so serving.

The veteran justice on the board, Edward C. Simmonds, has announced he will resign end of his present term next spring. Simmonds has served continuously as a township justice since 1924.

At least seven Republicans are now circulating nominating petitions for the four trustee posts on the April 6 ballot. The primary election will be run off on Feb. 16.

Township Attorney Eugene B Calder, jr., announced that nominating petitions are being accepted for trustee at the Ypsilanti Township Hall in anticipation that the proposed post of trustee will be enacted into law prior to the election.

Passed at the special legislative session last Thursday was a bill permitting the election of four trustees with voting power to the township board. They will replace the justices of the peace. The bill now awaits Gov. G. Mennen Williams’ signature.

A complete slate of Democratic contests for all seven board posts reflected high interest in forth-coming election.

Opposing Sanderson in the race for treasurer will be Gerald L. Post of 10049 Textile Rd., Democratic candidate.

Donald E. Ehle, incumbent township clerk, will again seek Republican nomination for that office.  Russell Kenyon of 552 Marion Ave. has announced he will oppose Ehle as a Democratic candidate.

The township's lone incumbent constable, James W. Beach of 177 Wiard Rd., is circulating petitions for renomination on the G0P ticket.

Former constables Harold H. Tedder and Edward W. Herbst have moved out of the township, and no other candidates for that post have filed for petitions as yet.

At least 91 signatures of qualified voters must appear on the nominating petitions for each candidate. Petitions must be on file at the clerk's office in Ypsilanti Township Hall prior to 4 p.m. next Monday.

[for treasurer will be Gerald L.